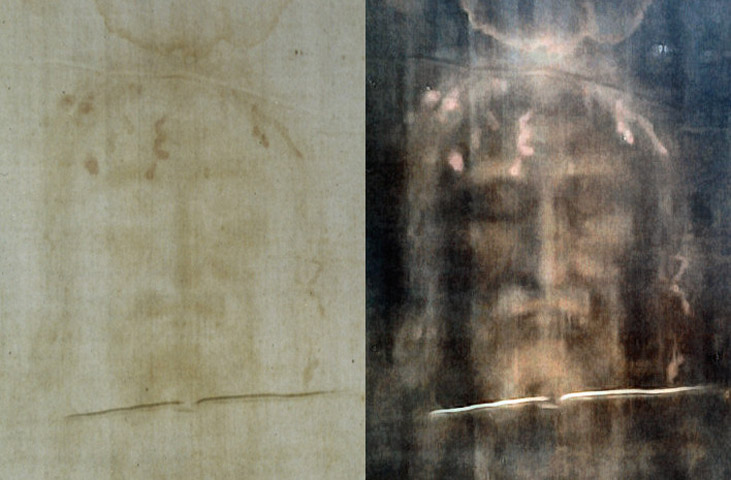 Traces of Byzantine coins found on the Holy Shroud

With the supposed imprint of the body of Christ

Traces possibly of Byzantine coins have been found on the Holy Shroud, which according to legend, was the cloth used for the burial of Christ after his crucifixion.

The discovery is included in a paper published by a team of researchers from the University of Padua in the Journal of Cultural Heritage and presented at the Conference on the Shroud of Turin in Canada. The paper puts forward the argument that long before the year 1000, gold Byzantine coins bearing the image of Christ had been wrapped in the Shroud.

A study conducted by Giulio Fanti and Claudio Furlan, using an environmental scanning electron microscope combined with an X-ray spectrometer, resulted in the detection of  traces of “electron”; an alloy of gold and silver with a small percentage of lead. At the same time, the percentage was measured of elements contained in Byzantine coins minted between the 11th and 12th centuries.

The investigation discovered that there was a complete match between the traces of the micro elements found in the Shroud and the Byzantine coins. According to Fanti, this finding contradicts the dating in 1988 with the use of radioactive carbon 14, which ruled that the Shroud belongs to the 14th century. The new finding reinforces the hypothesis that a linen imprint was created by pressing a coin onto the fabric, for personal worship reasons.

The Holy Shroud is a cloth 4.4metres long and 1.1 metres wide bearing the double image of a human body with traces of torture and crucifixion. Today it is kept in the chapel dedicated to it of Turin Cathedral. The first sources regarding its existence go back to the 14th century when the French knight Geoffroy de Charny built a small church in the town of Lirey near Troyes to keep the Shroud. Sources on its earlier existence are even rarer. 5th and 6th century texts mention that in the city of Edessa in Asia Minor there is a shroud with the image of Christ, while in the 10th century the “Mandylion″, as it was then called, was moved to Constantinople. After the capital of Byzantium was sacked by the crusaders in 1204, it is believed that the cloth was taken to Greece where the de Charny family was at that time. In the first half of the 15th century the knight moved the Shroud to Lirey, in 1453 it was transferred to the house of the rulers of Savoy, while since 1983 it is the property of the Holy See.