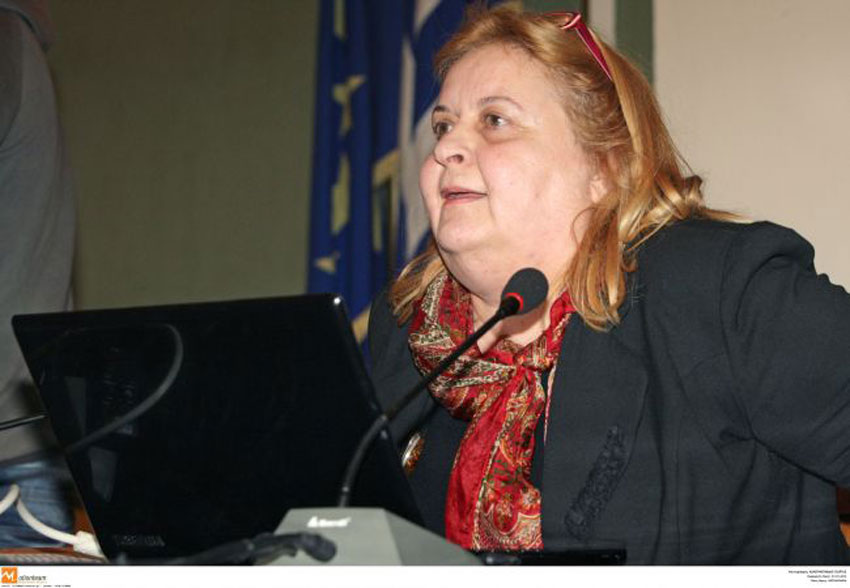 “Amphipolis is an ecumenical monument”

Lecture by Katerina Peristeri at the Museum of the Macedonian Struggle, Thessaloniki

‟An ecumenical monument which could become a development hub for the entire region” is how the Kasta tomb of Amphipolis was described by its former excavator archaeologist Aikaterini Peristeri while addressing the packed auditorium of the Museum of the Macedonian Struggle in Thessaloniki.

After introducing the public to the history of the area during its heyday, in the years of Alexander the Great, but also in the Roman and Byzantine eras, Mrs Peristeri referred to the history of its excavations (originally conducted by archaeologist Dimitrios Lazaridis and then by her after 2011), while repeating in detail the history of the discoveries from the summer of 2011 with the location of the hill enclosure, which -she said characteristically – ‟was made into a tumulus by order of Alexander the Great in order to include all the graves located in the area, and the rest of the monumental discoveries, up to 2015, when the  excavations were interrupted …”.

In her lecture on ‟The Monumental burial complex of the Kasta Tomb in Amphipolis,” Ms. Peristeri referred to:

-The layers of stone of the monumental enclosure found to be identical to those at the base of the Lion, leading to the correlation between the two monuments and to supporting the view that the Lion was at the top of the tumulus.

The monumental form of the Sphinx, found at the entrance to the tomb. “In the region of Macedonia, there is a single art. Sphinxes are found throughout Macedonia. I am referring to our Macedonia; don’t let us get confused with our northern neighbours,” she added.

The original mound was not circular but a trapezium. It is worth noting that on a map drawn by a British soldier cartographer during World War I, the region of the Strymonas estuary, Ancient Amphipolis and the Bulgarian trenches are depicted with the toponym “Hovis hill”, as the shape of the Kasta tomb reminded the British cartographer of the shape of the famous loaf of wholemeal bread of the Hovis company and he named the mound after it. The map is currently on display in the same exhibition space of the Museum of the Macedonian Struggle as part of the exhibition “Cartographic Stories of Macedonia at the beginning of the 20th century”.

As Mrs Peristeri said, the area had undergone many topographical changes during the wars, the heights having been repeatedly used as trenches. During the excavation, thousands of shells had been located and required special military units to deactivate them.

In this same lecture, organized by the Friends of the Museum of the Macedonian Struggle, Mrs. Peristeri, recently elected Head of Culture of the Region of Central Macedonia, could not conceal her bitterness about the interrupted excavation and her removal from it. “I no longer have access to the museum” she said, “the monument could have be visited during the last four years”, “efforts had been made for at least the Sphinx’s head to be displayed at the Amphipolis museum, but everything was done in a careless manner and with texts containing many inaccuracies”. She repeated at least three times during her lecture that “no time had been found to restore the pebble floors these last  four years”, and concluded with the wish for “the monument to become accessible to the public in two years from now – to make up for lost time”.

At the end of Mrs Peristeri’s lecture, the organizers did not allow the public to ask questions, as they said that it was purely a cultural event and that “this issue has caused considerable dissension”.