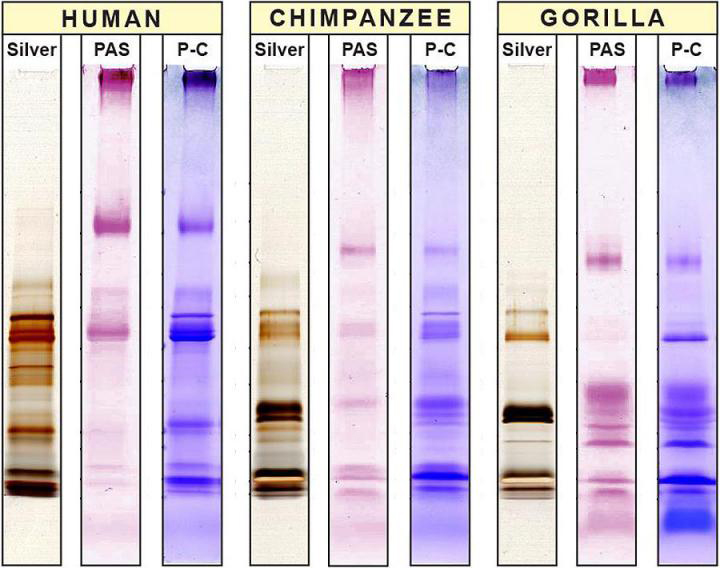 A secret in saliva

Two million years of eating meat and cooked food may have helped humans shift further from other great apes on the evolutionary tree. The evidence is in our saliva, according to new research from the University at Buffalo.

The research discovered that the human diet — a result of increased meat consumption, cooking and agriculture — has led to stark differences in the saliva of humans compared to that of other primates.

Human saliva is unique in that it is waterier and contains a different mix of proteins. The findings came as a big surprise to the researchers, since humans are known to be genetically close relatives of the great apes, chimpanzees and gorillas.

“Salivary proteins in humans and other primates could be overlooked hotbeds of evolutionary activity,” said Stefan Ruhl, DDS, PhD, lead investigator and professor of oral biology in the UB School of Dental Medicine. “We knew already that evolutionary adaptations to a human-specific diet have resulted in obvious changes to jaws and teeth, as well as the oral microbiome. Our findings now open up the possibility that dietary differences and pathogenic pressures may have also shaped a distinct saliva in humans.”

Saliva is a crucial bodily secretion in humans. The fluid helps digest food, protects tooth enamel, polices microbes in the mouth, and forms a first line of defense against pathogens. Saliva plays an important role in speech and taste as well.

Spit’s many functions can be credited to the salivary proteome, which are the thousands of proteins within the fluid. These proteins may also reveal clues to how humanity diverged from the great apes throughout its evolution.

The researchers compared the salivary proteins of humans and our closest evolutionary relatives: gorillas and chimpanzees. Macaques — who share a common, more distant ancestor with humans and great apes — were examined as well.

-Humans have waterier saliva than great apes. The overall protein content in human saliva was less than half of the amount found in chimpanzee, gorilla and macaque saliva.

-Human saliva is more adept at breaking down starch, modifying fat, and detecting key flavors in human diet. The investigators discovered in humans higher amounts of amylase (an enzyme key to digesting starch into sugars) and carbonic anhydrase VI (an enzyme involved in taste perception) than was present in great apes. The saliva of humans and chimpanzees also contained more zinc-alpha-2-glycoprotein, a protein that aids in fat metabolism, than the spit of gorillas.

-Losing our fur has led to the lack of latherin in human saliva. Latherin, a detergent-like protein that helps fluids become frothy, was only found in the saliva of the great apes. The researchers believe that humans, who no longer grow fur coats and don’t engage in social grooming, lost the need to produce the protein.

-All major proteins detected in human saliva were also present in chimpanzee and gorilla saliva. The range of proteins detectable in saliva of humans matched that of the great apes. However, drastic differences in protein quantity and structure were found. “The later may in part be due to different glycans — complex sugar molecules — attached to the proteins”, says Ruhl.

“Did human salivary glands evolve to produce a more watery saliva to accommodate a diet which drastically differs from that of great apes?” asks Supaporn “Nina” Thamadilok, PhD, PharmD candidate at the Massachusetts College of Pharmacy and Health Sciences and former post-doctoral research associate in Ruhl’s lab. “Great apes and Old World monkeys chew on their fiber-rich food for longer periods of time, while humans swallow food faster, an ability that is arguably supported by the cooking of food. A watery consistency of saliva could aid in faster digestion of dry food in the mouth, and easier swallowing.

“It might also be advantageous to keep the mouth moist in arid savannah-like environments where early humans evolved, or be important to facilitate human speech and vocalization. Of course, those possibilities remain speculative.”

Co-investigator Omer Gokcumen added, “The study’s findings provide a necessary basis for future studies to assess whether the differences in human salivary proteins were caused by natural selection.”

“The challenge will be to decipher the genetic underpinnings of these changes and understand the evolutionary mechanisms that caused them. For some of the genes, we have a good idea, for most of the others however, we still have to find out,” said Gokcumen, PhD, associate professor of biological sciences in the UB College of Arts and Sciences

Differences between the saliva of humans and great apes were also found in proteins involved in defense against disease.

The saliva of chimpanzees, gorillas and macaques possessed greater amounts of parotid secretory protein than human spit. Human and chimpanzee saliva contained higher levels of secretory immunoglobulin components than gorilla saliva. Each of the proteins play a role in defense against disease.

“Besides diet, pathogenic pressure is another important driving force for evolutionary adaptation,” said Ruhl. “Whether any of the salivary proteins that show human-specific features were driven to change by diseases that came along with the evolution of humans into a top predator and the later shift towards agriculture and breeding livestock is an intriguing question worth examining.

“Little is known about the degree to which human saliva has adapted to dietary, technological (pounding, cutting and cooking), environmental and microbial pressures. Hopefully, other labs will join with their expertises, and help us answer those fundamental questions.”