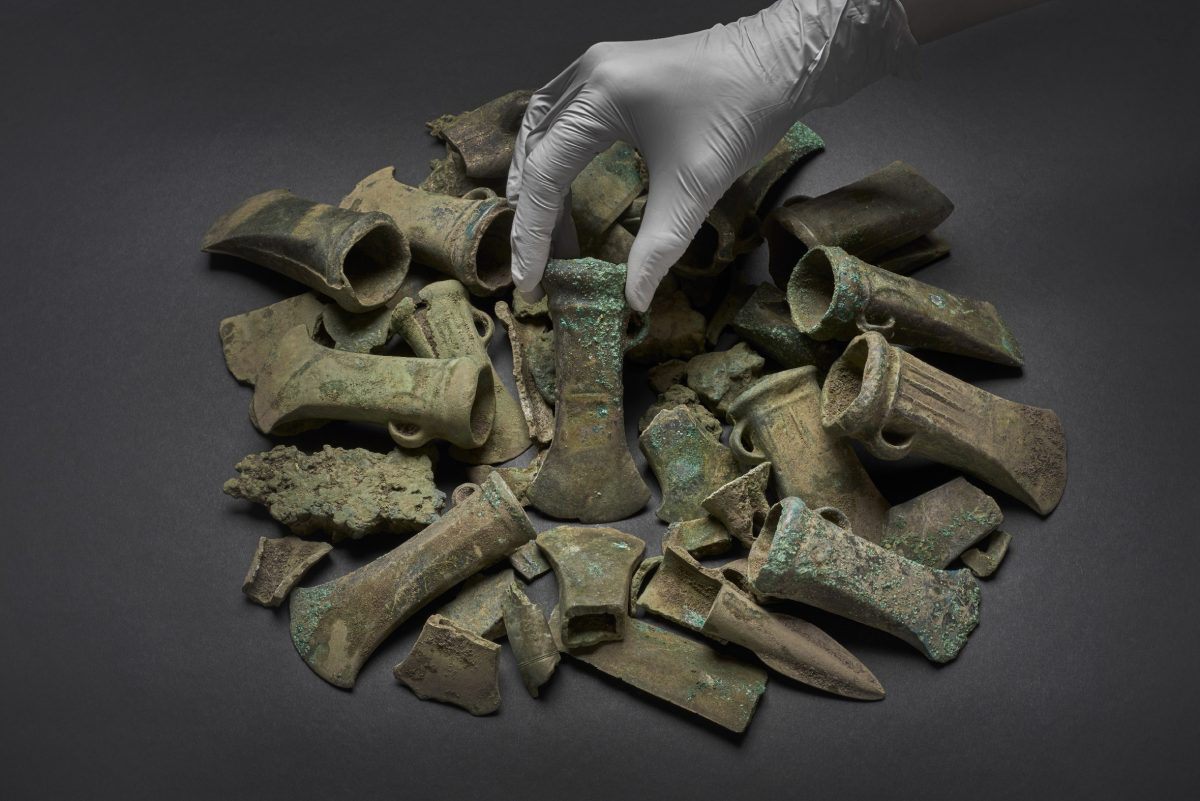 The largest ever Bronze Age hoard in London

The largest ever Bronze Age hoard to be discovered in London, the third largest of its kind in the UK, has been unearthed in Havering.

This hugely significant find will go on display for the first time as the focal point of a major exhibition at the Museum of London Docklands in April 2020.

A total of 453 bronze objects dating between c.900 and c.800 BC have been uncovered during a planned archaeological investigation, with weapons and tools including axe heads, spearheads, fragments of swords, daggers and knives found alongside some other unusual objects, which are rarely found in the UK.

Almost all the weapons appear to be partially broken or damaged, raising questions as to why these objects ended up being carefully buried in groups close together. The deliberate placement of these items may suggest a specialist metal worker operated in this area, and this large scale deposit of bronze may represent an accumulation of material akin to a vault, recycling bank or exchange. Could this treasure have been a religious offering, were they hoping to recycle the metal, control access to the material, or did Bronze Age tools lose their value with the emergence of iron technology?

Objects from the hoard and an in-depth look into these questions will be presented to the public for the first time next year at the Museum of London Docklands. All the archaeological work was agreed with and closely monitored by Historic England, assisted by the Portable Antiquities Scheme, and further conservation and analysis of the artefacts is currently underway which will reveal more insights into this incredible find.

It’s incredibly rare to have uncovered a hoard of this size on one site. This discovery is of huge importance and raises questions as to why this treasure was buried in this way and why it was never recovered? These questions and more will be investigated in the exhibition at the Museum of London Docklands next year.”

Duncan Wilson, Chief Executive of Historic England, said: “This extraordinary discovery adds immensely to our understanding of Bronze Age life. It also underlines the importance of planned assessment and, when appropriate, excavation in archaeological hotspots when new development comes along. The opportunity to investigate here and ultimately unearth the remarkable hoards that have come to light was only possible because of the effective partnership between archaeologists and developers.

The finds have already taught us a great deal about this distant age, and on-going analysis and public outreach means that many more people will benefit from this window into the past thanks to this example of successful development-led archaeology.”

Andrew Peachey, Specialist in Prehistoric and Roman Pottery at Archaeological Solutions, said: “The excavation has been an unprecedented opportunity and experience for our team to be able to excavate these intricate bronze hoards in such a valuable context.  The setting of many hoards is often unclear, but these were deliberately placed and aligned within a late Bronze Age enclosure so that we could excavate them in their entirety.

The location of the enclosure and hoards, overlooking the river Thames, made for a dramatic setting, especially as the sun rose and set, highlighting that in prehistory this would have been a special location. We are very grateful for the continued support of Ingrebourne Valley Ltd and look forward to further specialist analysis of the finds and working with the Museum of London on an exhibition to bring new life to old bronzes.”

Peter Stewart, Chair of the Havering Museum, said: “Havering Museum is very proud to be associated with the Museum of London and to be given the opportunity of displaying artefacts from the incredible Bronze Age hoard following the major exhibition at the Museum of London Docklands. The Hoard is hugely significant in the long history of Havering and London and will prove to be a great attraction and educational resource for both museums.”