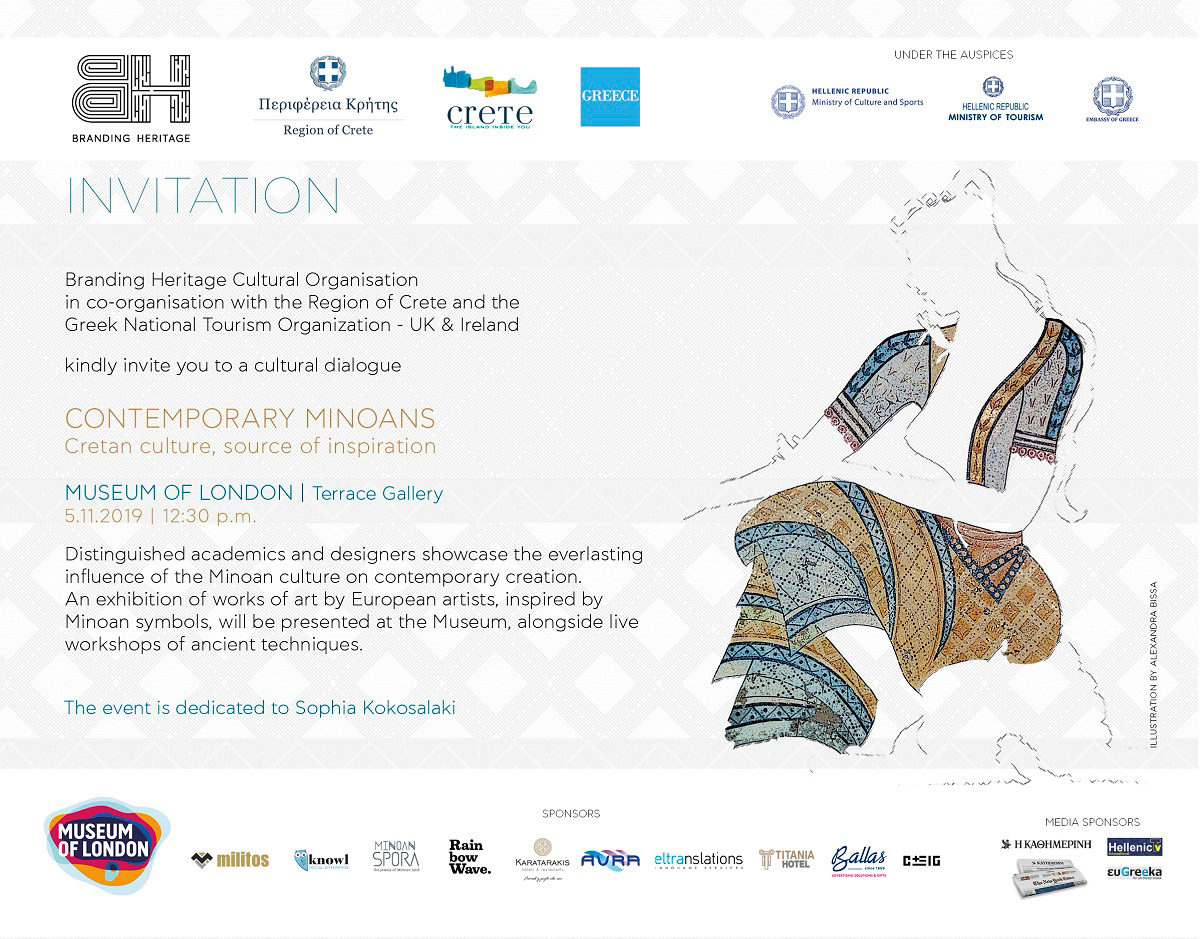 Branding Heritage Cultural Organisation in co-organisation with the REgion of Crete and the Greek National Tourism Organization – UK & Ireland invite to a cultural dialogue, entitled “Contemporary Minoans. Cretan culture, source of inspiration”, at the Museum of London (Terrace Gallery), to day on 12.30 p.m.

Distinguished academics and designers showcase the everlasting influence of the Minoan culture on contemporary creation. An exhibition of works of art by European artists, inspired by Minoan symbols, will be presented at the Museum, alongside live workshops of ancient techniques.

The event is dedicated to Sophia Kokosalaki.

Distinguished academics and designers from Europe come together in London to showcase the everlasting influence of Minoan culture on the global contemporary creation scene (fashion, gastronomy, music, art). From the innovative dances of Sergei Diaghilev (Ballets Russes) to Ted Shaw, from William Blake’s Minotaur to Pablo Picasso’s groundbreaking artworks inspired by the Labyrinth’s mythical creature and from Mariano Fortuny’s celebrated Κnossos scarf to Karl Lagerfeld and Sophia Kokosalaki, the Minoans, Europe’s earliest advanced civilisation, continue to capture the imagination of archaeologists and artists alike.

This high-level cultural event “Contemporary Minoans: Cretan culture, source of inspiration” is organised at the initiative of Cultural Organisation Branding Heritage (BH) with the support of the Region of Crete and the Greek National Tourism Organisation UK & Ireland, on Tuesday November 5 2019 at the Museum of London (150 London Wall, London EC2Y 5HN map), starting at12:30 p.m. The event is held under the auspices of the Hellenic Ministries of Culture, Tourism and the Embassy of Greece to the United Kingdom.

The event is dedicated to fashion designer with Cretan origin Sophia Kokosalaki who passed away unexpectedly in October. Journalist Harriet Quick, contributing editor at Vogue UK and Sarah Mower MBA, Chief Critic Voguerunway and British Fashion Council Ambassador for Emerging Talent will pay tribute to the designer’s creative genius and exceptional personality. Last year, Sophia Kokosalaki was honoured by Branding Heritage and the Region of Crete at the Heraklion Archaeological Museum for her valuable contribution to the promotion of the Greek heritage and the Minoan culture on the international fashion scene.The distinction was given within the framework of the multifaceted cultural event ‘Contemporary Minoans’ and ‘Cooking like Minoans’ held in presence of HRH Prince Charles of Wales.

The event will be addressed by Regional Governor of Crete Stavros Arnaoutakis, President Angela Gerekou and Secretary-General Dimitris Fragakis of the Greek National Tourism Organisation, Ambassador of Greece to the Court of St. James’s H.E. Dimitris Caramitsos-Tziras, Journalist and Founder of Branding Heritage Katerina Frentzou.

A special message will be sent by the Head of Picasso Administration Claude Picasso while the closing address will be delivered by the painter of Knossos Palace Yiannis Politis. The event will be moderated by Journalist and Fashion Features Director at Vogue Greece Elis Kiss and BH Expert and Managing Partner at Militos S.A. Olga Stavropoulou.