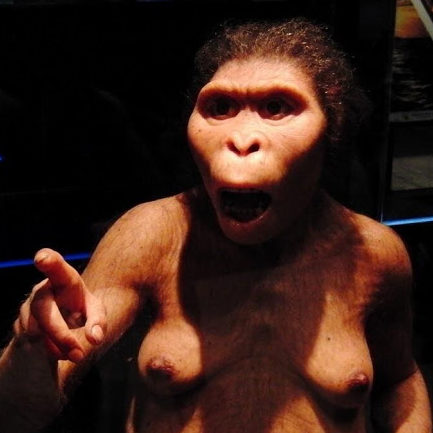 New research from the University of Adelaide

New research from the University of Adelaide suggests living great apes are smarter than our pre-human ancestor Australopithecus, a group that included the famous “Lucy.”

The study, conducted in partnership with the Evolutionary Studies Institute of the University of the Witwatersrand and published in the Proceedings of the Royal Society B, challenges the long-held idea that, because the brain of Australopithecus was larger than that of many modern apes, it was smarter.

The new research measured the rate of blood flow to the cognitive part of the brain, based on the size of the holes in the skull that passed the supply arteries. This technique was calibrated in humans and other mammals and applied to 96 great ape skulls and 11 Australopithecus fossil skulls.

Research lead Professor Roger Seymour from the University of Adelaide’s School of Biological Sciences said the study revealed a higher rate of blood flow to the cognitive part of the brain of living great apes compared to Australopithecus.

“The results were unexpected by anthropologists because it has been generally assumed that intelligence is directly related to the size of the brain,”‘ Professor Seymour said.

The human brain uses 70% of its energy on synaptic activity, and that amount of energy relies on a proportionately high blood supply to deliver oxygen. Although our brain occupies only 2% of our body weight, it uses 15—20% of our energy and requires about 15% of the blood from the heart.

Professor Seymour said the great apes were known to be very intelligent and included the gorilla Koko, who was taught to communicate with over 1000 signs, a chimpanzee called Washoe who learned about 350 signs, and Kanzi, a bonobo, who not only developed good English comprehension and syntax but also made stone tools.

“How does the intelligence of modern great apes stack up against that in our 3 million-year-old relatives, the australopithicines such as Lucy? Non-human great apes have smaller or equal sized brains compared to the size indicated by the fossil braincases of Australopithecus species, so Lucy is generally considered to have been smarter.

“It is known that the large human brain looks like a scaled-up primate brain in terms of size and neuron number. However, the study shows that cerebral blood flow rate of human ancestors falls well below the data derived from modern, non-human primates.

“Based on the results, it is estimated that blood flow to Koko’s cerebral hemispheres was about twice that of Lucy. Because blood flow rate might be better measure of information processing capacity than brain size alone, Koko seems to have been smarter.”