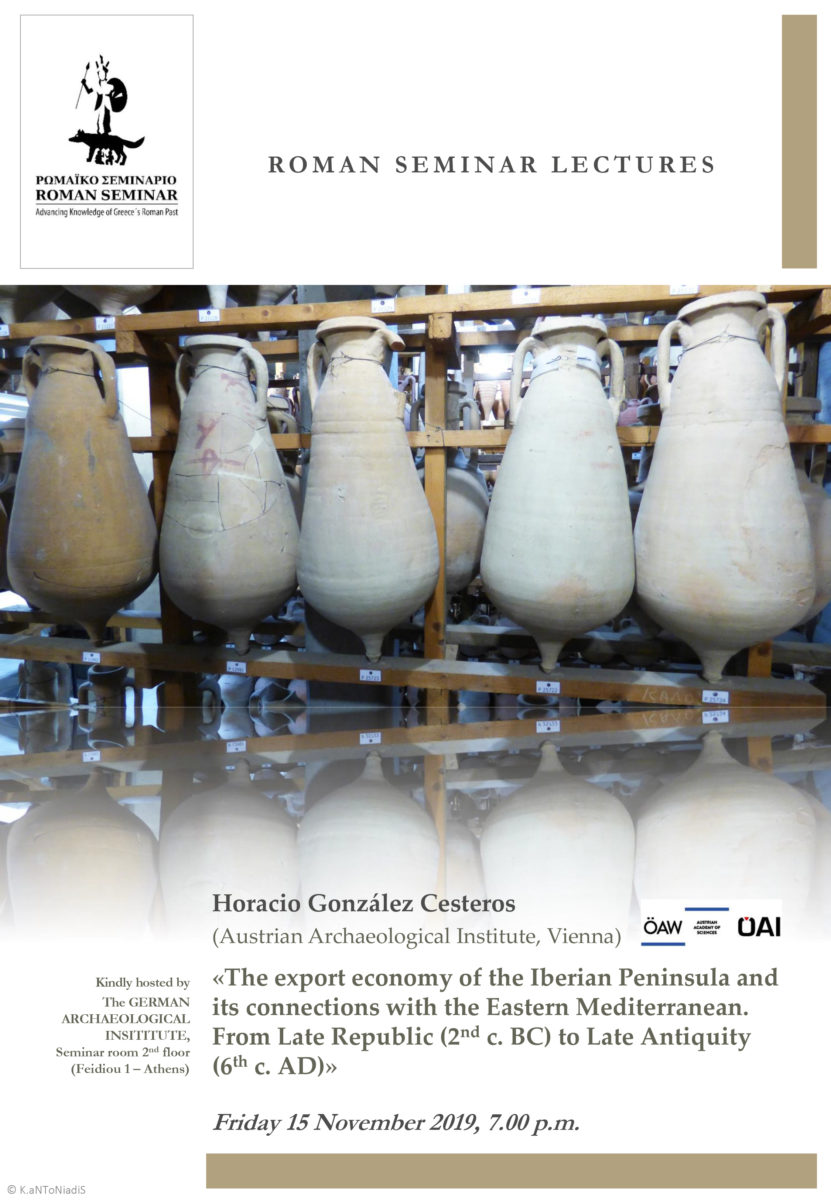 The upcoming Roman Seminar by Horacio González Cesteros (Austrian Archaeological Institute, Vienna) will be held on Friday 15 November 2019 at 7.00 pm.

The subject of the Roman Seminar is: “The export economy of the Iberian Peninsula and their connections with the Eastern Mediterranean. From Late Republic (2nd cent. BC) to Late Antiquity (6th cent. AD)”.

The Iberian Peninsula was at least from the early moments of the first Millennium BC a very rich territory that exported his surpluses to the Mediterranean economy.

Most of this richness was due to the huge amounts of different kinds of metals accumulated under Spanish earth. Special relevance took the Southeast and the Northwest mine districts during the late Republican and early Imperial times. Together with metals, Marmora and other earth resources were exported to the whole roman world and further their borders. Nevertheless the archaeological traces of this commerce are not always easy to analyse.

Even if metals were an essential part of the Roman economy and policy in Hispania, the richness of the Hispanic territories was also based in other kind of goods produced in the Hispanic lands and waters. Basic commodities such as olive oil, wine/wine by-products and fish sauces/salted fish left much more evidence due to two important facts: 1) the visibility of their productive facilities (wine and oil presses, fish tanks) 2) The use of ceramic containers for the packing and transport of these commodities. Produced in huge quantities along the Hispanic geography, three main regions have been determined as intensely active agricultural and amphora producers during the Imperial period and Late Antiquity: The formal province of Baetica, the North-Eastern area of the big Tarraconensis
province and the Lusitanian coastal area.

The aim of this lecture is to have a look at the economy of ancient Iberian Peninsula based on the current archaeological evidence, mainly focused on pottery items in function of their distribution patterns and their chronological sequence. Together with the Hispanic territories, three main areas where the Hispanic commodities were imported will be analysed: 1) The Italian Peninsula, with special relevance of Rome and the Vesuvian area. 2) The North-western frontier of the Roman Empire. 3) The eastern Mediterranean.