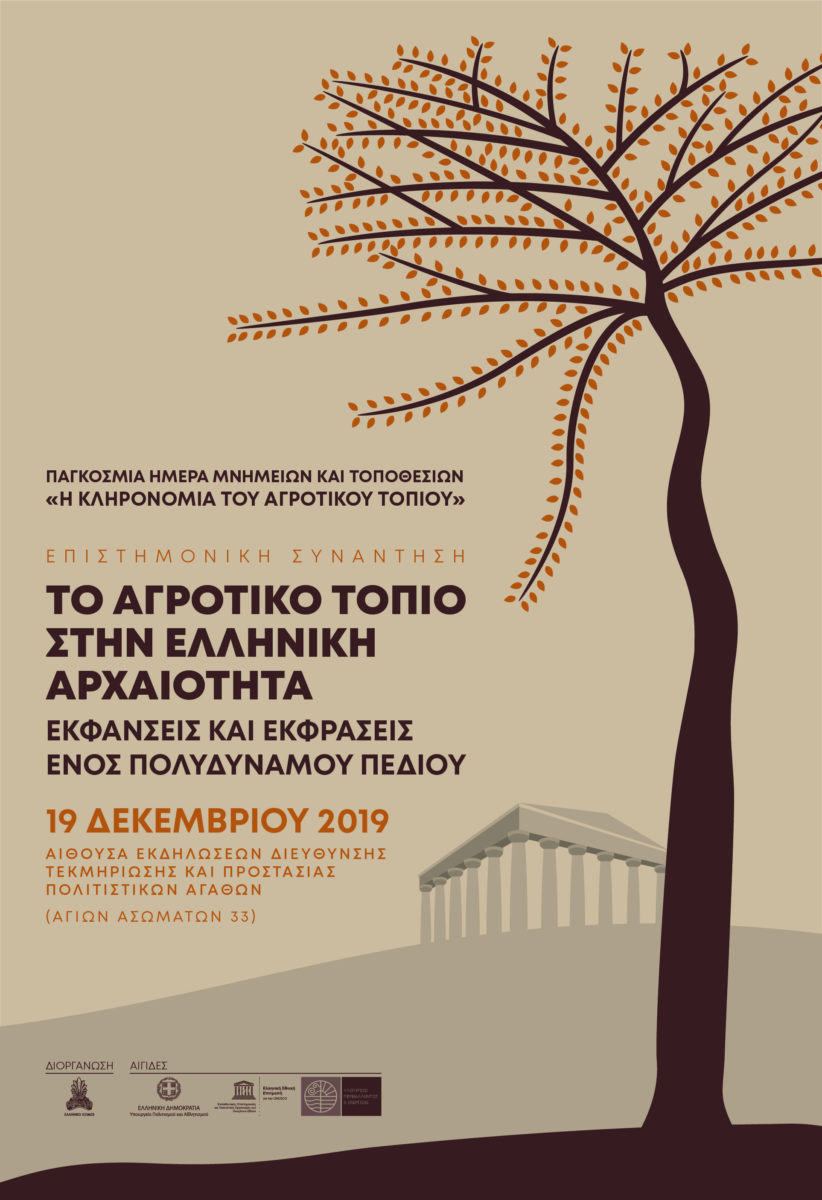 The rural landscape in Greek antiquity

Aspects and expressions of a multidimensional field

The Greek section of the International Council on Monuments and Sites (ICOMOS) is organizing a Scientific Conference entitled “The Rural Landscape in Greek Antiquity: Aspects and Expressions of a Multidimensional Field”. The Conference will take place on Thursday, December 19, in the events hall of the Ministry of Culture’s Directorate for the Documentation and Protection of Cultural Goods (33, Agion Asomaton street) and is under the auspices of the Ministries of Culture and Sport, Environment and Energy and the Hellenic National Committee for UNESCO.

The rural landscape is a complex field of research that has been the subject of interdisciplinary debate in recent years. Indicative of this approach is its selection by ICOMOS as the topic of the Symposium organized by the International Committee on Cultural Landscapes, as well as having been the celebration theme for the International Monuments and Sites Day on April 18 this year.

According to the definition adopted by the ICOMOS General Assembly in 2017, rural landscapes are defined as “terrestrial and aquatic areas co-produced by human-nature interaction used for the production of food and other renewable natural resources, via agriculture, animal husbandry and pastoralism, fishing and aquaculture, forestry, wild food gathering, hunting, and extraction of other resources”.

Rural landscapes, therefore, represent the imprint of humankind’s relationship with the natural environment in the light of a continuous evolution in time and space. In this sense, they make up a cultural landscape, since any system of interaction between the anthropogenic factor and the natural landscape can be regarded as such. In the context of this conference, the terms ‘landscape’, ‘space’, ‘place’, ‘countryside’ and ‘nature’ are included in the concept of ‘rural landscape’ in a broad sense, with human beings acting as mediator.

The search for the varied aspects and expressions of the rural landscape specifically in ancient Greece, aspires to make it a rich container of actions, feelings, moods and intentions, far removed from an inert geographical framework or an abstract setting where human actions “occur”. Agricultural and livestock production primarily leave their strong imprint (often with the remains of secondary processing) and sometimes more drastic interventions transform or even spoil the natural landscape. Moreover, in a multi-faceted composition functioning as a system, the concept of nature affects people’s state of mind and influences economic as well as social choices, is instilled in philosophical reflection, embodied in art, often defines religion and rituals, inspires myths and legends.

In the long historical course of time, rural landscapes will be “readings” of the necessary balance between human activity and the environment, constitute the second component of the city and symbolically mark boundaries, frontiers and the countryside. What reaches us today is both a palimpsest and a solid compilation of successive records in time and space, composing an entire tangible and intangible cultural heritage.