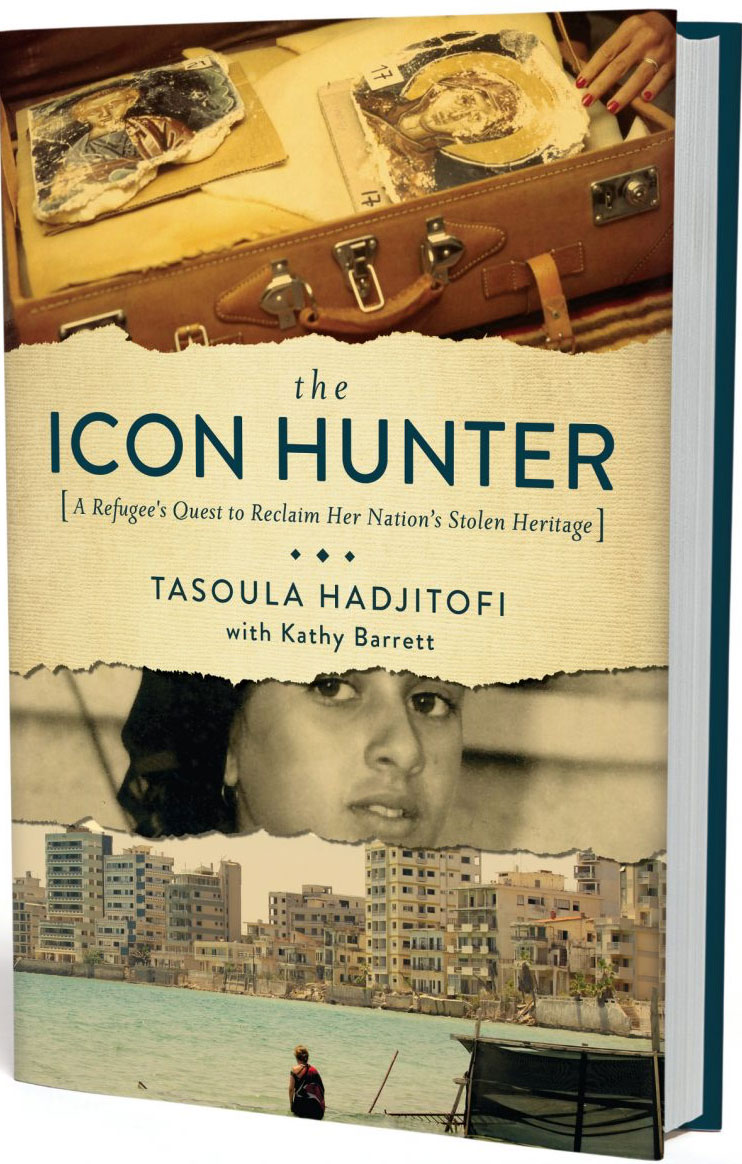 “When I saw the mosaics, I realized what was happening in the Occupied Territories …”. In 1987, the then young honorary consul of Cyprus in Holland was amazed when she came upon photographs of mosaics from Kanakaria with images of saints. The ring of illegal traders of art works and antiquities showed them to her while trying to secure her as a prospective buyer.

“I remembered my mother who was kneeling while we were being bombed clasping the Easter candle in her hand for three days. Who gave them the right to sell these things? I want to stop them …,” said the author of the book The Icon Hunter published by Livanis editions and recently presented by her in person at the Society of Macedonian Studies in Thessaloniki.

This is how Tasoula Hadjitofi, a Cypriot refugee from Famagusta, began her personal lifetime struggle in 1987.  Through her efforts, the author contributed to the return and repatriation of a considerable number of Cypriot religious treasures, seized from churches during the Turkish invasion of the island. It was only a small part of the numerous antiquities and relics from across the world being trafficked by criminals in Northern Europe, whose activities came to an end when the Munich ring was uncovered in 1987. It took ten years of surveillance, identifications, the gathering of evidence, started by Hadjitofi’s own initiative in alerting the Cypriot authorities and Interpol and assisting in the case.

To succeed in the return of the religious treasures Tasoula Hadjitofi, in consultation with law enforcement authorities infiltrated the underworld and was obliged to trust an art dealer known for his dubious role… Her involvement led to the dismantling of the Munich ring, the arrest of the Turkish antiques smuggler and the discovery of 5,500 stolen artefacts, icons and relics.

“It is estimated that three hundred and fifty works were Cypriot, but only two hundred and sixty were returned,” said the author and added, very moved, that “We went and saw them in the church of Agios Ioannis and the people were worshipping them. We took back what was taken from us…”

The story of this eventful journey is included in the pages of the book The Icon Hunter. The book that is basically autobiographical, has all the elements of a crime thriller; whatever she experienced and recorded on her hunt for the discovery and repatriation of stolen icons. “To see these religious treasures and to have the head of one of your saints being bargained over in hotels abroad. They are barbarians,” said Tasoula Hadjitofi.

The author also spoke about her experiences of the Cypriot tragedy which she lived through at a young age: “I was 14 when the invasion took place. I was in Famagusta in the closed area. I personally registered the pain and fright we all experienced in Cyprus. And I know very well the fear and terror felt today either by Syrians, Iraqis or any other person traumatized by war or a refugee… because I am one of 65 million refugees across the world who cannot return to their homes”.

“We are talking about the period of the invasion. Forty five years on I see my city as a ghost city; I am not a ghost, I exist, like the other sixty thousand Varousiots that left…” she continued very moved and added “If there is no solution for Cyprus till I die, I am a Dutch citizen and I shall request that I be cremated in Holland and have my ashes scattered in this Varosi …”