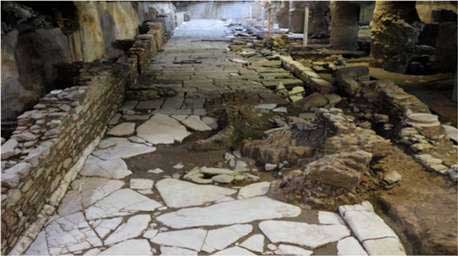 Decision on the antiquities being removed from the Venizelos station

The Central Archaeological Council approved the proposal by the Attiko Metro S.A. for the construction of the Venizelos Station with the method of temporarily removing and then reinstalling the antiquities, despite numerous negative responses from institutions, private citizens and archaeologists.

Thirteen members of the Council voted in favour, two against and three left before the voting took place.

For over three hours the Attiko Metro presented its proposal.

Present at the session representing those in favour of the antiquities removal were the Governor of the Region of Macedonia Apostolos Tzitzikostas and Mayor of Thessaloniki Konstatinos Zervas who said among other things that they had only lately been informed of the issue of the antiquities in the Venizelos station because they were still handling the refugee agenda.

Yannis Boutaris also spoke on behalf of the Movement of Citizens of Thessaloniki about the protection of cultural heritage and was in favour of an in situ highlighting of the antiquities.

However, following the opinion of the CAC on the removal and reinstalling of the Venizelos station antiquities, according to exclusive information from makthes.gr, the next step of the Thessaloniki Citizens’ Movement for the Protection of Cultural Heritage will be the appeal to the State Council of Greece for cancellation of this decision, to go ahead when the relevant ministerial decision is adopted.

During the archaeological excavations at the metro station “Venizelos” a whole city from the ancient Greece and Rome with stunning findings has been unearthed.

Archaeologists have brought to light an extraordinary treasure trove of more than 300,000 ancient artifacts, such as gold wreaths, rings, coins, amphorae, oil lamps, perfume vases and several statues of the goddess Aphrodite. The goddess of love and beauty was also found depicted in mosaics, one of them showing her reclining on a couch in front of Eros. The discovery of statues of Aphrodite dating from as late as 4AD showed that the city “served as a powerful bastion of the old religions until late antiquity”, said Professor Polyxeni Adam-Veleni of the archaeological museum of Thessaloniki.

Archaeologists found a stone-paved road, the Decumanus Maximus, which would have run through the heart of Thessaloniki in 6AD, as well as the remains of villas, shops, workshops and an early Christian church.

More than 5000 tombs and graves were uncovered, some of them containing exquisite golden wreaths.

During the construction of the metro network, archeologists found a stone-paved road, the Decumanus Maximus, which would have run through the heart of Thessaloniki in the sixth century AD, as well as the remains of villas, shops, workshops and an early Christian church.

“The excavations are the biggest archaeological project of recent years in Greece,” Yannis Mylopoulos, the chairman of Attiko Metro commented at the time.