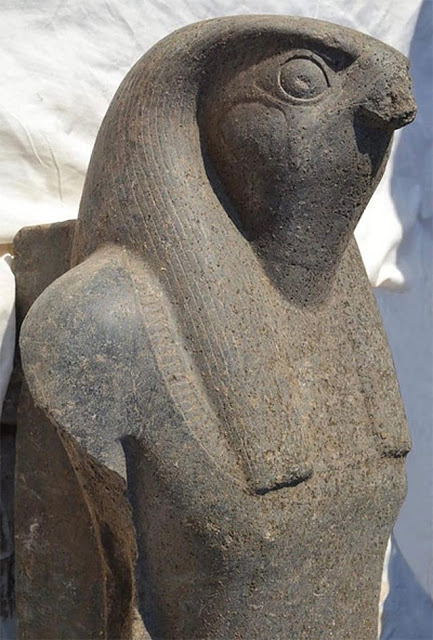 An Egyptian-German archaeological mission headed by Dr. Hourig Sourouzian discovered a large statue of the god Horus, during the excavation of King Amenhotep III’s Temple of Million of Years at Kom el Hetan, on the West Bank in Luxor area.

According to Fathi Yassin, Director General of Antiquities in West Luxor, the statue is made of black granite and its height reaches 1.85 m. It depicts Horus, as a standing figure in the shape of a falcon, wearing a kilt; his legs are lost and his arms are broken.

According to Dr. Sourouzian,  the find took place in the framework of  The Colossi of Memnon and Amenhotep III Temple Conservation Project which runs since 1998 under the supervision of the Ministry of Antiquities and the German Archaeological Institute. The project aims to preserve the temple’s  remains and present them with their dignity in their original places.

Found in a good state of preservation, the statue is of a high artistic, scientific and archaeological value. It gives information on the temple’s architectural evolution and the site’s history, especially after the building’s collapse due to a devastating earthquake in the twenty-eighth century BC. Stones were used to build temples and other royal statues in the Ramesside period. The find is now under restoration. The mission, which has also brought to light busts of other deities in the site, continues its work hoping to locate the statue’s legs.

It is worth noting that the site has yielded a large number of statues depicting deities as well as Amenhotep III and his wife Tiy, in different poses.  It is known that Amenhotep III had adorned his funerary temple (also known as Temple of Millions of Years), with statues of specific gods specifically for their healing and protecting abilities.