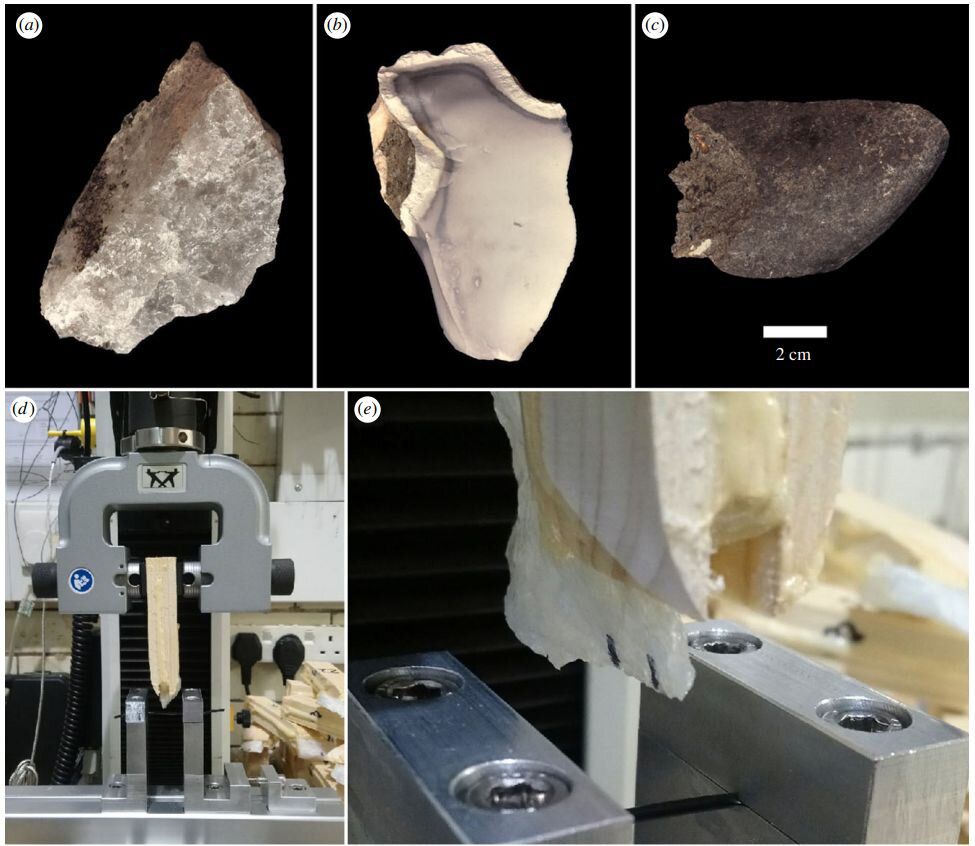 According to a new study by University of Kent and UCL

Early Stone Age populations living between 1.8 – 1.2 million years ago engineered their stone tools in complex ways to make optimised cutting tools, according to a new study by University of Kent and UCL.

The research, published in the Journal of Royal Society Interface, shows that Palaeolithic hominins selected different raw materials for different stone tools based on how sharp, durable and efficient those materials were. They made these decisions in conjunction with information about the length of time the tools would be used for and the force with which they could be applied. This reveals previously unseen complexity in the design and production of stone tools during this period.

The research was led by Dr Alastair Key, from Kent’s School of Anthropology and Conservation, and is based on evidence from mechanical testing of the raw materials and artefacts found at Olduvai Gorge in Tanzania — one of the world’s most important sites for human origins research.

Their research, which employed experimental methods more commonly used in modern engineering research, shows that hominins preferentially selected quartzite, the sharpest but least durable stone type at Olduvai for flake tools; a technology thought to have been used for expedient, short-lived cutting activities.

Chert, which was identified as being highly durable and nearly as sharp as quartzite, was only available to hominins for a short 200,000 year period. Whenever it was available, chert was favoured for a variety of stone tool types due to its ability to maximise cutting performance over extended tool-use durations. Other stone types, including highly durable lavas, were available at Olduvai, however their use varied according to factors such as how long a tool was intended to be used for, a tools potential to create high cutting forces, and the distance hominins had to travel to raw material sources.

The study reveals a level of complexity and flexibility in stone tool production previously unseen at this time. Earlier research had demonstrated Early Stone Age populations in Kenya to select highly durable stone types for tools, but this is the first time cutting edge sharpness has been able to be considered. By selecting the material best suited to specific functional needs, hominins optimised the performance of their tools and ensured a tools efficiency and “ease-of-use” was maximised.

Dr Key said: “Why Olduvai populations preferentially chose one raw material over another has puzzled archaeologists for more than 60 years. This has been made all the more intriguing given that some stone types, including lavas and quartzite, were always available.

“What we’ve been able to demonstrate is that our ancestors were making quite complex decisions about which raw materials to use, and were doing so in a way that produced tools optimised for specific circumstances. Although we knew that later hominin species, including our own, were capable of such decisions, it’s amazing to think that populations 1.8 – 1.2 million years ago were also doing so.”

Dr Proffitt added: “Early hominins during the Oldowan were probably using stone flakes for a variety of tasks. Mostly for butchering animals whilst scavenging, but also probably for cutting various plants and possibly even shaping wood. A durable cutting edge would have been an important factor when using these tools.

“There are many modern analytical techniques used in material sciences and engineering that can be used to interrogate the archaeological record, and may provide new insights into the mechanical properties of such tools and artefacts. By understanding the way that these tools work and their functional limits it allows archaeologists to build up a greater understanding of the capabilities of our earliest ancestors at the dawn of technology.”

The team now hopes that researchers at other archaeological sites will want to apply similar mechanical tests and techniques to help understand the behaviour of Stone Age populations.