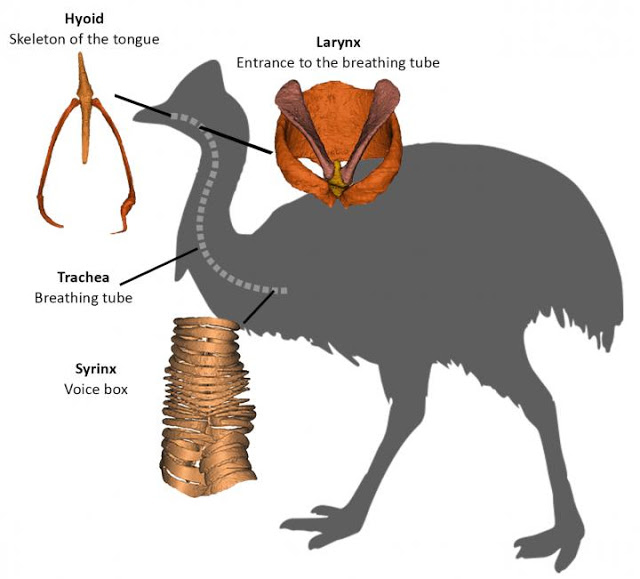 The iconic and colourful Australian cassowary, the second largest living bird, has been studied for hundreds of years. However, their solitary nature in the dense rainforests of northern Queensland has ensured that many fundamental aspects of these animals continue to elude scientists.

Researchers from Flinders University in South Australia recognised that the throat structures involved with breathing, eating and vocalising (the syrinx, hyoid, and larynx) were almost totally unknown.

Using advanced scanning technologies, the team at Flinders University were able to 3D image these structures, looking in detail at the anatomy and comparing them to that of other closely related birds.

“Scanning lets us see details that we wouldn’t be able to otherwise, including the shapes of internal structures, without causing damage to them” says lead author on the paper, Flinders PhD candidate Phoebe McInerney.

The cassowary’s closest relative is the Australian emu, so it was no surprise that they showed many similarities in the throat region.

“What did surprise us though was that despite extensive variation in this region between cassowaries and other primitive birds, known as palaeognaths, the extinct New Zealand moa and the living South American tinamou were very similar,” said McInerney.

Recent analysis of DNA has concluded that moa and tinamou are closest relatives. However, these results had been met with scepticism by some biologists: the moa was huge and flightless, and the tinamou is a small, flighted partridge-like bird.

And so, for many years, morphological similarities between the moa and tinamou eluded scientists, and yet, hidden deep within the throat, in a structure historically ignored, the answers have been uncovered: “The morphology of the often-neglected larynx has shown to be far superior than the other anatomical traits biologists previously used to infer evolutionary relationships for this group”, says Associate Professor Trevor Worthy, a co-author on the study.

“The unexpected family tree for primitive birds based on genomic evidence is looking more and more convincing”, says Professor Michael Lee, another co-author.

The researchers conclude that despite being historically overlooked, it is important not to forget the small things when studying evolutionary relationships among birds.

The results have been published in the international journal BMC Evolutionary Biology.