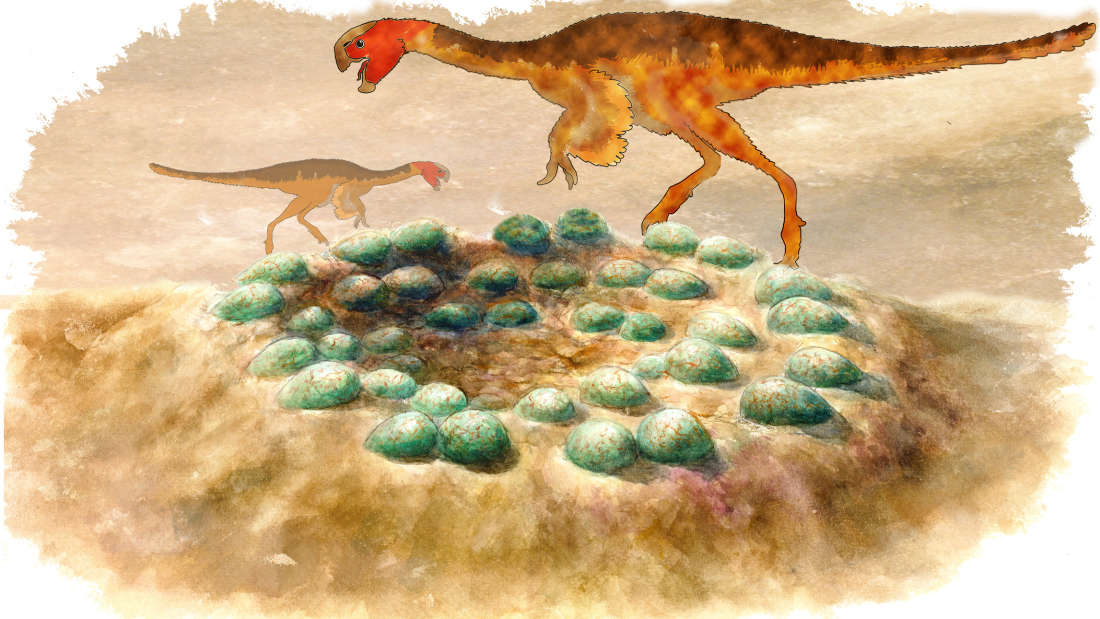 Oviraptorids developed at different speeds in their eggs

Did Oviraptoridchicks hatch at the same time? Researchers at the University of Bonn and the TU Munich provide presumptive evidence.

Did the chicks of dinosaurs from the group oviraptorid hatch from their eggs at the same time? This question can be answered by the length and arrangement of the embryo’s bones, which provide information about the stage of development. But how do you look inside fossilized dinosaur eggs? Paleontologists from the University of Bonn used the neutron source of the Technical University of Munich at the Heinz Maier-Leibnitz Zentrum (MLZ) in Garching. This showed that oviraptorids developed at different speeds in their eggs and that they resemble modern birds in this respect. The results have been published in the journal Integrative Organismal Biology.

Until now, researchers have assumed that the two-legged dinosaurs known as oviraptorids, which lived in Central Asia during the Upper Cretaceous (from 88 to 66 million years), should be placed between modern crocodiles and birds with regard to their reproductive biology. Crocodiles bury their eggs and the offspring hatch at the same time. With birds, however, hatching in the nest often happens at different times.

Together with scientists from Taiwan, Switzerland and the Heinz Maier-Leibnitz Zentrum in Garching, paleontologists from the University of Bonn have now investigated how differently the development of embryos in three 67 million years old oviraptorid egg fossils from the Ganzhou Basin of Jiangxi Province in China had progressed. “Oviraptorid eggs are found relatively frequently in Central Asia, but most of them are removed from the context of their discovery,” says Thomas Engler from the Institute for Geosciences at the University of Bonn. Often it is then no longer discernible whether the eggs are from a single clutch.

“This is different with the fossils we’ve examined: We found a pair of eggs and another egg together embedded in a block of rock,” reports Dr. Tzu-Ruei Yang, who discovered the unusual find during an excavation near the city of Ganzhou in China. This led the researchers to conclude that the 7-inch (18cm) eggs were laid almost at the same time by a female oviraptorid. Yang completed his doctorate at the Institute for Geosciences at the University of Bonn and now works as a researcher at the National Museum of Natural Sciences in Taiwan.

The researchers tried to estimate whether the baby dinosaurs would have hatched at the same time or at different times based on the developmental stage of the embryos in the three eggs. The length of the bones in the egg plays an important role here. “The embryo with comparatively longer bones is more developed,” explains Yang. Another indication is the extent to which the bones are connected to each other. A more strongly connected skeleton suggests a higher developmental stage of the dinosaur embryo.

A look inside the dinosaur egg

But how is it possible to determine the position of bones inside a fossilized dinosaur egg? The paleontologists at the University of Bonn initially tried to do this with the institute’s own X-ray microcomputer tomograph. “Unfortunately, it was not possible to distinguish the bones from the surrounding rock,” says Engler. For this reason, the researchers took the dinosaur eggs to the research neutron source of the Technical University of Munich at the Heinz Maier-Leibnitz Zentrum (MLZ) in Garching. “The high penetration depth of the neutrons at the NECTAR and ANTARES facilities made it possible to visualize the internal structures,” says Dr. Malgorzata Makowska, who was in charge of measurements and analyses at the MLZ and is now carrying out research at the Swiss neutron source PSI.

The length and position of the embryo bones led the researchers to conclude that the single egg must have been laid earlier than the pair of eggs in the same clutch. However, the embryos of the pair were also at different developmental stages. Thin sections confirm these results. The researchers used these to measure the thickness of the eggshells. The developing embryo absorbs part of the shell because it needs calcium for its growing skeleton. “The more material is removed from the egg shell, the more advanced the embryo’s development,” explains Yang.

On the basis of these indications, the scientists conclude that the reproductive biology of oviraptorids were similar to that of modern birds, whose chicks hatch at different times. The results argue against the strategy of crocodiles or turtles, which all emerge from their eggs at the same time. This has brought the researchers one step closer to the life of the long extinct oviraptorids, who roamed Central Asia on two legs. “Furthermore, the study shows that exploring fossils with neutrons yields novel scientific results,” says Engler.