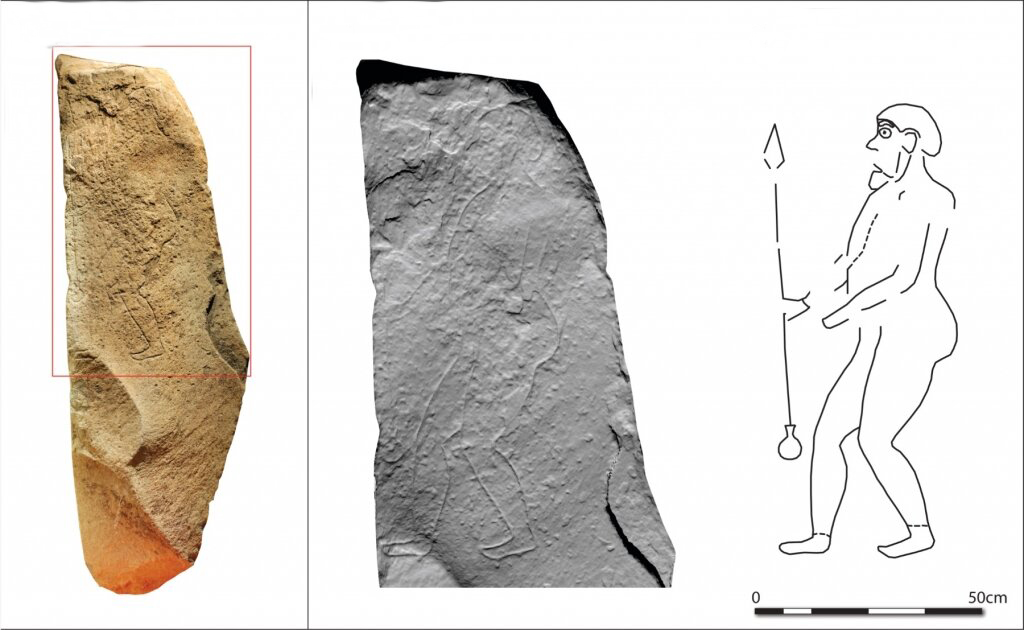 The monolith depicts a male figure carrying a spear

Archaeologists have carefully recreated images of a figure on a Pictish stone, discovered during the construction of a road in 2017, with the details uncovered offering new insights into Scotland’s warrior past.

Though the outline of the man could be seen, the carving was faint in places and the surface of the stone had partly delaminated.

Archaeologists from the University of Aberdeen, which is leading the study of Northern Picts, have taken thousands of photographs to create 3D images. This has clarified the design and allowed them to compare it to those found on other stones.

Professor Gordon Noble, Head of Archaeology at Aberdeen, and Dr Mark Hall, archaeological curator at Perth Museum, say the stone – known as the Tulloch Stone is a “significant find” which adds to the corpus of material available for study.

In a paper published in Antiquity the research team argues that similarities observed between the Tulloch Stone, named after where it was discovered, and those found at Rhynie in Aberdeenshire and Newton of Collessie in Fife are “filling the gaps” of Scotland’s undocumented history.

Professor Noble said: “By looking at the three stones together, we have been able to draw new conclusions about what these figures represent.

“On the Tulloch Stone we can now see that the man is carrying a distinctive door-knob butted spear which we know from previous research was in use from the third to the sixth century.

“He also has a very distinctive hairstyle, is wearing a helmet and necklace and has a faint line around the left ankle which could suggest footwear or tight leggings.

“In line with the other stones, this is clearly a depiction of a warrior.  Its ﬁnd spot overlooks the coming together of the rivers Tay and Almond, a junction marked by a Roman fort and later a possible Pictish royal centre, suggesting the monolith might have been located in a cemetery of the elite.

“Because the presentation of the figures is standardised across all of the stones, it is likely that it represents a generic sacred image, rather than it being a depiction of someone buried there.”

Dr Hall says this also points to a war lord or warrior ethos which has been well documented in Anglo-Saxon England but for which little evidence has previously been seen in Scotland.

“In Anglo-Saxon England we have lots of examples of burials with weaponry and the poem Beowulf epitomizes the warrior ethos of this period,” he added.

“This has not been evidenced in Scotland in the same way but here through the new Tulloch find and a reconsideration of long-known stones we can see that warrior ideology cast in stone – meaning these martial values were conveyed in a very public way to be visible in the landscape and to invoke supernatural protection.”

Professor Noble added “This bridges a crucial gap in knowledge as although we know that warrior ideology is important for rulership, we haven’t previously been able to demonstrate how that evolves through time in the period before the sixth and seventh centuries when we begin to get historical records for Scotland.

“We believe that the weapon-bearing individuals shown on these stones may represent a war-oriented social organisation that was integral to resisting the Roman Empire and to creating the overtly hierarchical societies of the post-Roman period.”

The Tulloch Stone was discovered during construction work for the A9/A85 scheme, part of the Perth Transport Futures Project, and is now undergoing further research and conservation prior to going on display in a new museum being developed for Perth, set to open in 2022.

“Most of the recent Pictish finds have been as a result of people paying greater attention,” he added.

“The workmen who scooped up this stone did well to realise that there was something on it and to alert the appropriate authorities.

“It is likely that there are more Pictish stones out there to be found and every new stone is a fantastic addition to the corpus.

“This discovery of the Tulloch stone has revealed fresh details allowing the reconsideration of the existing related sculptures, fostering new insights and conclusions that are not possible when only dealing with a single example.”

The full paper detailing their research findings has been made available free of charge.

Kevin Grant, Archaeology Manager at HES, said: “We are delighted to be able to fund Open Access for this paper, allowing everyone to freely access information about this exciting discovery.”