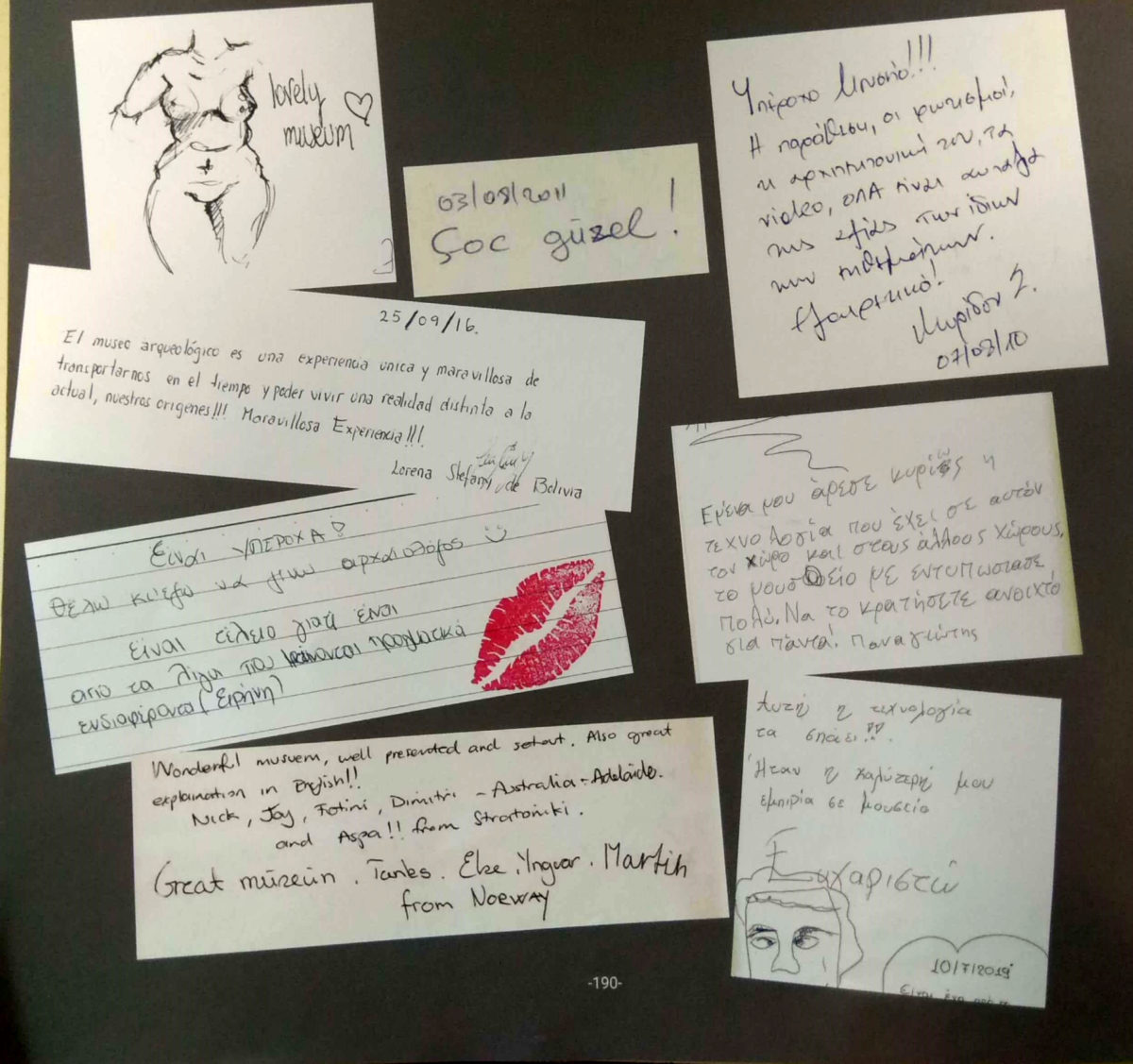 The Archaeological Museum of Thessaloniki

“Çok güzel/ Very beautiful” (3.8.2011). “I liked the technology in this hall and in the other halls. The museum really impressed me! You must keep it open for ever. Panagiotis”. “This technology is really cool”. (10.7.19). “My best museum experience. Thank you!” “It’s fantastic, I ‘d like to be an archaeologist too!” “Hi, I’m Elisa and after this exhibition I’ll start studying history.”

These are selected phrases from “impressions” of young visitors written in a book of Impressions of the Archaeological Museum of Thessaloniki that “adorn” the last pages of an anniversary album issued by it.

More than 136,000 visitors (thousands of young students among them) were welcomed during the past year (2019) by the Archaeological Museum of Thessaloniki, more than doubling its number of visitors in just over a decade.

Since its founding in 1962, the Archaeological Museum of Thessaloniki has been functioning as the Metropolitan Museum of Macedonia, as it conserves, studies, exhibits and systematically promotes antiquities from across Macedonia.

Its collections include approximately 50,000 ancient artefacts in collections of metal objects, miniatures, ceramics, organic materials (whose crowning glory is the Derveni Papyrus, Europe’s most ancient “book”), stone monuments, mosaics, murals, paintings, contemporary paintings and the largest collection of gold wreaths in the world.

In recent years the Archaeological Museum of Thessaloniki has mounted seven large permanent exhibitions and two outdoor ones with free admission. It has organized 30 temporary archaeology exhibitions, 70 fine art exhibitions with 219 artists from 45 countries, and is host to a permanent collection of more than 100 contemporary art works.

It has also realized more than 40 training programmes for its permanent and temporary exhibitions, attended by 44,770 children and adults.

The museum has hosted 74 scientific meetings with 1,027 scientists from 236 institutions and 35 countries, and the booklets distributed to its visitors have been translated into 20 languages.

Details of the Museum’s work were announced during the presentation of the anniversary album (its circulation bringing the number in the series Publications of the Thessaloniki Archaeological Museum to 44) and its variety of activities is captured through its short texts and rich archival material.

The anniversary album entitled “The Archaeological Museum of Thessaloniki, 10+ years [2006-2019]” concerns the reopening of the Museum after its closure and renovation. It is dedicated to its last director, archaeologist Liana Stefani who died prematurely two months ago, just two years after taking office.

At the same event, the scientific catalogue was presented of the AMT’s current exhibition “From South to North. Cycladic colonies in the northern Aegean”. An elegant 400-page, richly illustrated edition with 12 scientific texts and 363 entries, it sheds light on a particularly important episode in the history and evolution of northern Greece; its colonization by the inhabitants of Paros and Andros at the dawn of historical times.

An open museum without events

The presentation of the anniversary album was the last mass gathering event of the Thessaloniki Archaeological Museum before the appearance of the coronοvirus. As part of the measures to prevent the virus from spreading, the Thessaloniki Archaeological Museum is canceling all of its scheduled events between March 9-15, but will however be open to visits by the public.