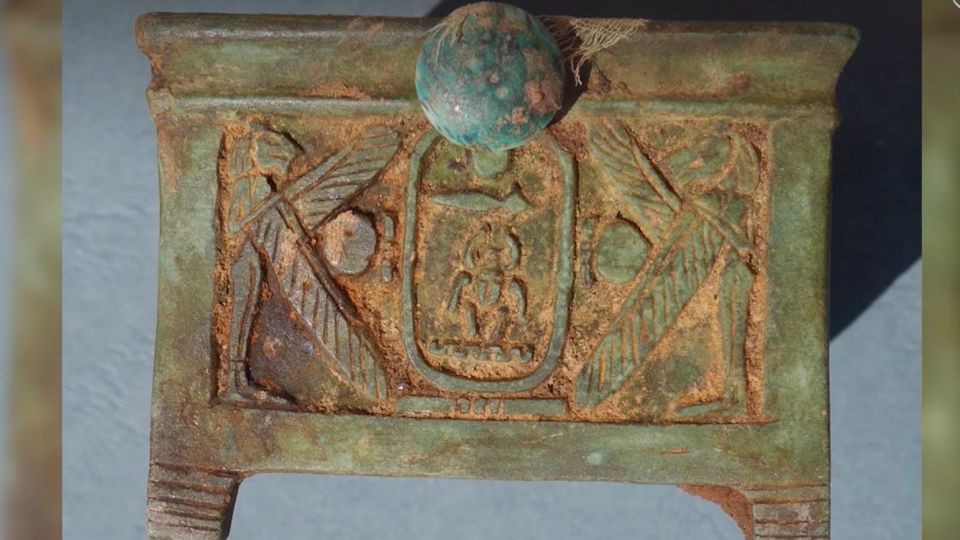 3,500-year-old box with Pharaoh name on it found in Egypt

In the vicinity of the Hatshepsut Temple in Deir el-Bahari

Polish archaeologists have discovered a nearly 3,500-year-old chest under a rock debris near the famed temple of woman Pharaoh Hatshepsut, Egypt.

Led by Professor Andrzej Niwiński of the Institute of Archaeology of the University of Warsaw, the archaeologists were exploring a debris-filled gap in the vicinity of the Hatshepsut Temple in Deir el-Bahari, Egypt, as they stumbled upon a stone chest and a bundle both placed inside a cavity in a rock.

“The chest itself is about 40 cm long and just a little shorter than that. It was perfectly hidden looking like an ordinary stone block. Only after closer scrutiny, it turned out that it was in fact a chest,” recounted Professor Niwiński.

A couple of linen-wrapped items were found inside the stone receptacle. The first bundle contained a skeleton of a goose, which had been sacrificed, while the second concealed a goose egg. The third bundle held a wooden casket that in turn contained a canvas-wrapped egg, most probably of an ibis.

Next to the stone chest yet another bundle was discovered. This time the package concealed a small wooden box that also contained another bundle. Within it, a shrine-shaped faience box with the name of Pharaoh Thutmose II written on it in hieroglyphs.

According to Professor Niwiński, the objects put inside the box were an allusion to Thutmose II’s titles and names. The archaeologist said that Thutmose II was a husband to the famous Queen Hatshepsut, and reigned for three years until his death.

Professor Niwiński has high hopes for finding the Pharaoh’s tomb in proximity to the spot where the chest was discovered. “The royal deposit implies that a temple or a tomb was erected for the king here. And because we are in the middle of a royal cemetery, there is no doubt that it must be a tomb. The discovery of this deposit suggests that we are in the process of finding a tomb,” the archaeologist posited.

The first Polish archaeological mission to Egypt was led by the founding father of Polish Mediterranean Archaeology Kazimierz Michałowski and was carried out in Edfu in 1937.

It was also Kazimierz Michałowski and his archaeologists who, at the request of the Egyptian minister of culture, launched reconstruction works at the temple of Queen Hatshepsut in 1961. In 1968, engineers from the State Studios for Conservation of Cultural Property joined archaeologists to perform construction-restoration works in the temple. When on the mission, Professor Michałowski discovered a previously unknown funerary temple of Thutmose III. As a consequence, most of the exploration works were moved to this site. The temple was unique due to its location and layout which differed from other sacral buildings of the New Kingdom period. The works were continued until 1972.