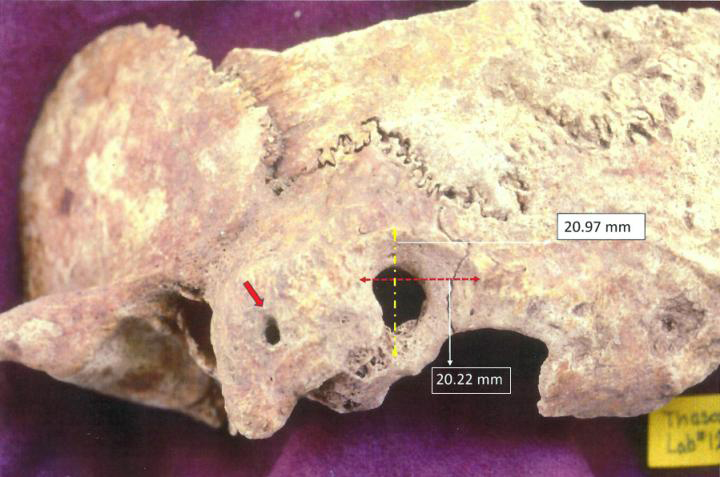 One of the earliest documented, from ProtoByzantine period

New research from Adelphi University has revealed the first forensically-assessed archeological discovery of remains of a group of domineering mounted archer-lancers and their kin of the Eastern Roman Empire from the turbulent ProtoByzantine period, which spanned the fourth to seventh centuries.

Ten skeletal remains – four women and six men likely of high social standing – were discovered in the Paliokastro site on Thasos island in Greece. Their bones illuminated their physical activities, traumas, and even a complex form of brain surgery.

“The burial place and architecture of the funerary monumental church and the construction of the graves is spectacular,” said lead researcher and anthropologist Anagnostis Agelarakis, PhD, who added that it indicates the high social standing of the individuals buried there.

The advanced preservation of their remains and the impressive location and architecture of the funerary monumental church where they were buried exhibit their high status in the region.

“According to the skeleto-anatomic features of the individuals, both men and women lived physically demanding lives,” said Agelarakis, professor of anthropology in Adelphi’s Department of History. “The very serious trauma cases sustained by both males and females had been treated surgically or orthopedically by a very experienced physician/surgeon with great training in trauma care. We believe it to have been a military physician.”

As for the brain surgery, Agelarakis suggests that “even despite a grim prognosis, an extensive effort was given to this surgery for this male. So, it’s likely that he was a very important individual to the population at Paliokastro.”

Agelarakis and his colleagues were able to derive medical and surgical data, as well as paleopathological data, on this “extraordinary head and neck surgery and the great efforts of the surgeon.” It was determined that the likely cause for the surgical intervention was infection and that archer died shortly after or during surgery.

“The surgical operation is the most complex I have ever seen in my 40 years of working with anthropological materials,” Agelarakis said. “It is unbelievable that it was carried out, with most complicated preparations for the intervention, and then the surgical operation itself which took place, of course, in a pre-antibiotic era.”

The results are described in a new book, “Eastern Roman Mounted Archers and Extraordinary Medico-Surgical Interventions at Paliokastro in Thasos Island during the ProtoByzantine Period: The Historical and Medical History Records and the Archaeo-Anthropological Evidence,” by Archaeopress, Access Archaeology.