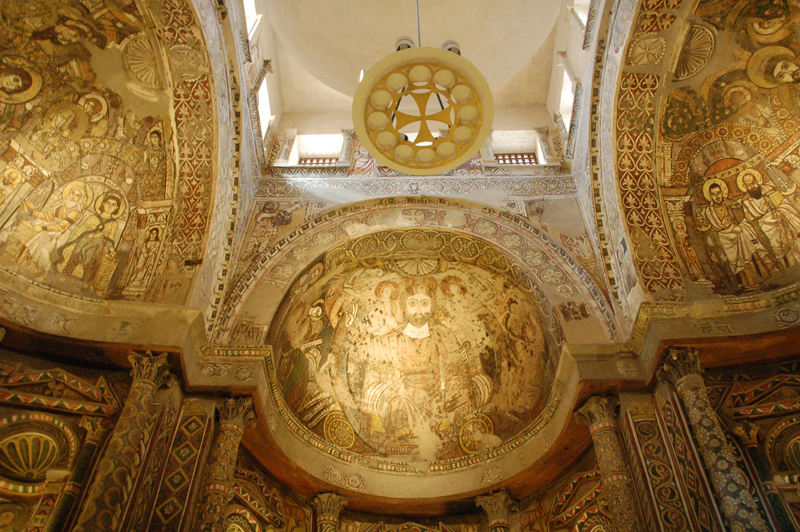 Egypt’s iconic Christian monuments are ‘revealed’ in a free online lecture on their research and conservation history.

A historic project for a set of iconic monuments

A historic partnership between the United States Agency for International Development (USAID), the American Research Center in Egypt (ARCE), the Egyptian Ministry of Tourism and Antiquities and the Coptic Orthodox Church has brought to life three spectacular Coptic churches and the earliest painted Christian tomb in Egypt. At the start, these monuments were only known within Egypt and to a small group of Coptologists (specialists in the history of the Copts). Now, all four are shining examples of the Christian tradition of creating wall paintings featuring holy figures, for devotional purposes.

The earliest, the Tomb of St. Shenoute at the White Monastery, dates to the middle of the fifth century C.E. Monks at the Red Monastery built a magnificent painted church in the late fifth century, and repainted it two more times in quick succession. Over thirty patrons paid to have a major program of wall paintings created in the Old Church at the Monastery of St. Antony, in the early thirteenth century.

The tradition of painting large-scale religious images on the walls of churches in Egypt died out in or shortly after the fourteenth century. Monks in the Monastery of St. Paul revived it in the early eighteenth century, using for some of their inspiration the thirteenth-century paintings in the nearby Monastery of St. Antony.

Major wall painting conservation and publication projects at these four sites revealed treasures that had not been seen for centuries. Previously ignored by scholars of the larger medieval world, these monuments and their painted interiors are now seen as making major contributions to the corpus of medieval art. As a result, the Egyptian/USAID/ARCE partnership has caused a fundamental rethinking of the role of Egypt in the creation of eastern Mediterranean visual culture, and has added four jewels to world heritage.

On June 3, 2020, at 1:00 p.m. EST/7:00 p.m. EEST, ARCE will host an online lecture with Elizabeth S. Bolman, past director of the Red Monastery conservation project, titled ‘Conserving Coptic Heritage: an Historic Egyptian-American Partnership.’ This event is free and open to the public. To register, click here.

Elizabeth S. Bolman engages with the visual culture of the eastern Mediterranean in the late antique and Byzantine periods. She is best known for her work in Egypt, in which she has demonstrated the vitality of Christian Egyptian art and presented new understandings of the nature of artistic production in the early Byzantine and Medieval periods.

Bolman was appointed Elsie B. Smith Professor in the Liberal Arts and Chair of the Department of Art History and Art at Case Western Reserve University in August 2017; she is charged with building the Keithley Institute for Art History in collaboration with the Cleveland Museum of Art, and leading the Joint Program between CWRU and the Cleveland Museum of Art. At Temple University Bolman received the Lindback Award for Excellence in Teaching and the Great Teacher Award; the College Art Association has recognized her expertise with its  Heritage Preservation Award for Distinction in Scholarship and Preservation In addition, is the recipient of fellowships and grants from the Guggenheim Foundation, Fulbright program, National Endowment for the Humanities, Dumbarton Oaks, the American Research Center in Egypt, and the United States Agency for International Development, among others.

This most recent book is the product of a multidisciplinary project that she founded and directed, which included the cleaning and conservation of spectacular and unparalleled early Byzantine paintings at the Red Monastery church. The conserved church has received a considerable amount of international attention; among other subjects, it includes a monumental secco painting of the Nursing Mother of God. Currently, Bolman is completing a gender studies analysis of depictions of the Byzantine Galaktotrophousa (nursing Virgin Mary), and is preparing the  Rostovtzeff Lectures which she gave at the Institute for the Study of the Ancient World, for publication.

To find more about the culture of Coptic Egypt, browse the archaeological Atlas of Coptic Literature, released recently. Click here.