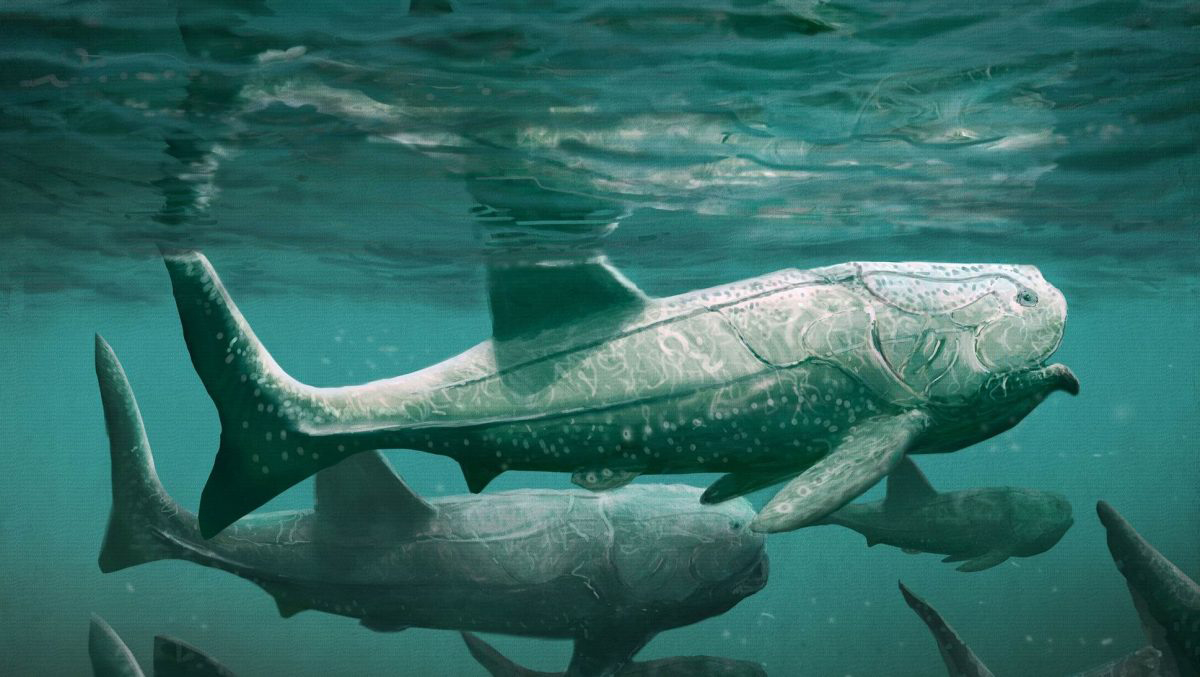 Titanichthys, a giant armored fish was a Suspension Feeder

Titanichthys roamed the seas and oceans during the Dovonian period 380 million years ago, new findings by the University of Zurich and the University of Bristol suggest that it fed by swimming through water slowly with its mouth open wide to capture high concentrations of plankton – similar to modern-day basking sharks.

The Moroccan part of the Sahara Desert offers many fascinating geological finds and fossils, such as the remains of the large dinosaur Spinosaurus, whose unusual crested tail recently caused quite a stir. Not far from its discovery site, much older fossils from the Devonian period can be found, including bones of placoderms – extinct armored fish that were bigger than a great white shark.

“When you do field work in the Anti-Atlas, massive skull bones of placoderms can be found quite frequently,” says Christian Klug, a researcher at the Paleontological Institute of the University of Zurich. “There are two distinct forms of armored fish, which were roughly the same size: The giant menacing Dunkleosteus and the ‘big-mouthed’ Titanichthys, which lived in the seas and oceans of the late Devonian period 380 million years ago.”

Working together with researchers from the University of Bristol, Klug conducted a study about the feeding habits of the armored fish Titanichthys and found a pattern consistent with modern-day sharks and whales.

Titanichthys has long been known as one of the largest animals of the Devonian period, with a length likely exceeding five meters as well as a lower jaw reaching lengths of more than one meter, similar to the basking shark. Unlike its similarly giant contemporary Dunkleosteus, however, there was no previous evidence of how Titanichthys fed.

While the lower jaw of Dunkleosteus and many of its relatives have strong fangs and crushing plates, the lower jaw of Titanichthys is narrow, toothless and without sharp edges suitable for cutting. In addition, it was unable to close its mouth completely. Titanichthys is therefore presumed to have been a suspension feeder, feeding on minute plankton by swimming slowly through water with its mouth open wide to capture high concentrations of plankton.

Testing the strength of jaws

To investigate this question, the paleontologists from the universities of Zurich and Bristol used biomechanical analysis to compare the lower jaw of various placoderm species as well as living filterers such as basking sharks and baleen whales. The team tested the resistance of the jaws by virtually applying forces to the jaws of 3D computer models, using a technique called Finite Element Analysis (FEA) to assess how likely each jaw was to break or bend.

“This revealed that the lower jaw of Titanichthys was much less resistant to stress and more likely to break than those of the other placoderm species that fed on large or hard-shelled prey,” says first author Sam Coatham. “These feeding strategies would probably not have been available for Titanichthys, since its lower jaw would not have been able to withstand the higher mechanical stress associated with feeding on large prey.”

Further analyses comparing the distribution of stress across the jaws showed similar patterns in Titanichthys and the basking shark, corroborating similarities in their feeding behavior. “The jaw features of Titanichthys resemble those of other suspension feeders, such as the baleen whale, whale shark or, as already mentioned, the basking shark,” explains Christian Klug. “They are, however, very different to those of other large predatory fish and toothed whales.”

The research team believes that there are other extinct species that would have filled an ecological role similar to Titanichthys, including other placoderms (armored fish) and at least one species of plesiosaur. “Our methods could be extended to identify other such species in the fossil record and investigate whether there were common factors driving the evolution and extinction of these species,” says Sam Coatham. “Such findings could have implications for our understanding of the conservation of modern suspension feeders, such as baleen whales.”