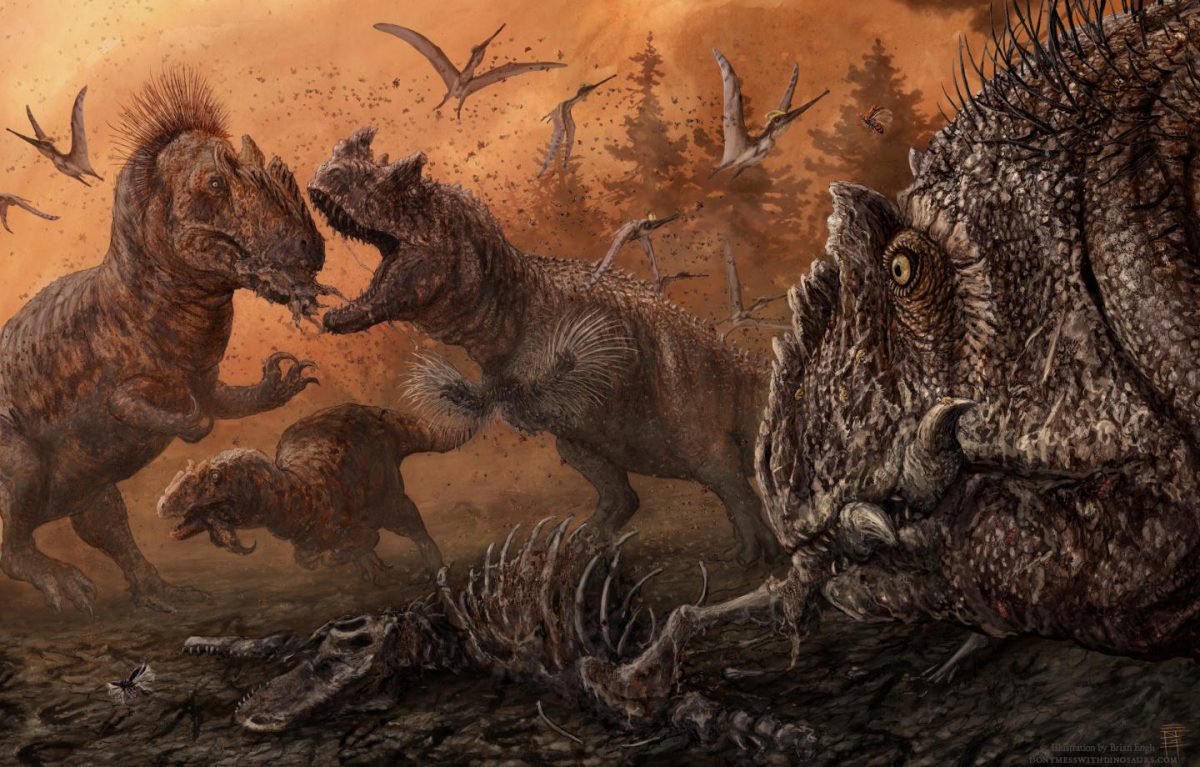 By surveying more than 2,000 bones from the Jurassic Mygatt-Moore Quarry

Big theropod dinosaurs such as Allosaurus and Ceratosaurus ate pretty much everything—including each other, according to a new study, “High Frequencies of Theropod Bite Marks Provide Evidence for Feeding, Scavenging, and Possible Cannibalism in a Stressed Late Jurassic Ecosystem,” published last month in the journal PLOS ONE.

“Scavenging, and even cannibalism, is pretty common among modern predators,” said lead author Stephanie Drumheller, a paleontologist in the University of Tennessee, Knoxville’s Department of Earth and Planetary Sciences. “Big theropods, like Allosaurus, probably weren’t particularly picky eaters if it meant they got a free meal.”

Researchers surveyed more than 2,000 bones from the Jurassic Mygatt-Moore Quarry, a 152-million-year-old fossil deposit in western Colorado, looking for bite marks. They found more than they were expecting.

There were theropod bites on the large-bodied sauropods whose gigantic bones dominate the assemblage, bites on the heavily armored Mymoorapelta, and lots of bites on theropods, too, especially the common remains of Allosaurus. There were hundreds of them, in frequencies far above the norm for dinosaur-dominated fossil sites.

Some were on meaty bones like ribs, but researchers discovered others on tiny toe bones, far from the choicest cuts. Pulled together, the data paints a picture of an ecosystem where dinosaur remains lay out on the landscape for months at a time–a stinky prospect, but one that gave a whole succession of predators and scavengers a turn at eating.

But why were there so many bites on the Mygatt-Moore bones? That question is a little harder to answer, at least without similar surveys from other dinosaur sites for comparison.

The Mygatt-Moore Quarry itself is a little unusual.

Volunteer members of the public have excavated most of the fossils found at the quarry. Julia McHugh, curator of paleontology with the Museums of Western Colorado and a co-author of the study, decided to continue this tradition of outreach by bringing students into the lab to help with the project. Now two of them, Miriam Kane and Anja Riedel, are co-authors on the new study as well.

“Mygatt-Moore is such a unique place,” McHugh said. “Science happens here alongside hands-on STEM education with our dig program and volunteers.”

Having so many marks on hand let the researchers really dig into details that are sometimes harder to study in smaller collections. For example, theropod teeth are serrated, and once in a while the tooth shape is reflected in the bite marks they make. Another co-author, Domenic D’Amore of Daemen College, had earlier figured out a way to translate those striated tooth marks into body size estimates.

“We can’t always tell exactly what species were marking up the Mygatt-Moore bones, but we can say many of these marks were made by something big,” D’Amore said. “A few may have been made by theropods larger than any found at the site before.”

For more than 30 years, researches and others have worked the Mygatt-Moore Quarry intensively, but even after all that time, each season brings new discoveries in the field and in the lab. This snapshot of dinosaur behavior is proof that old bones can still hold scientific surprises.