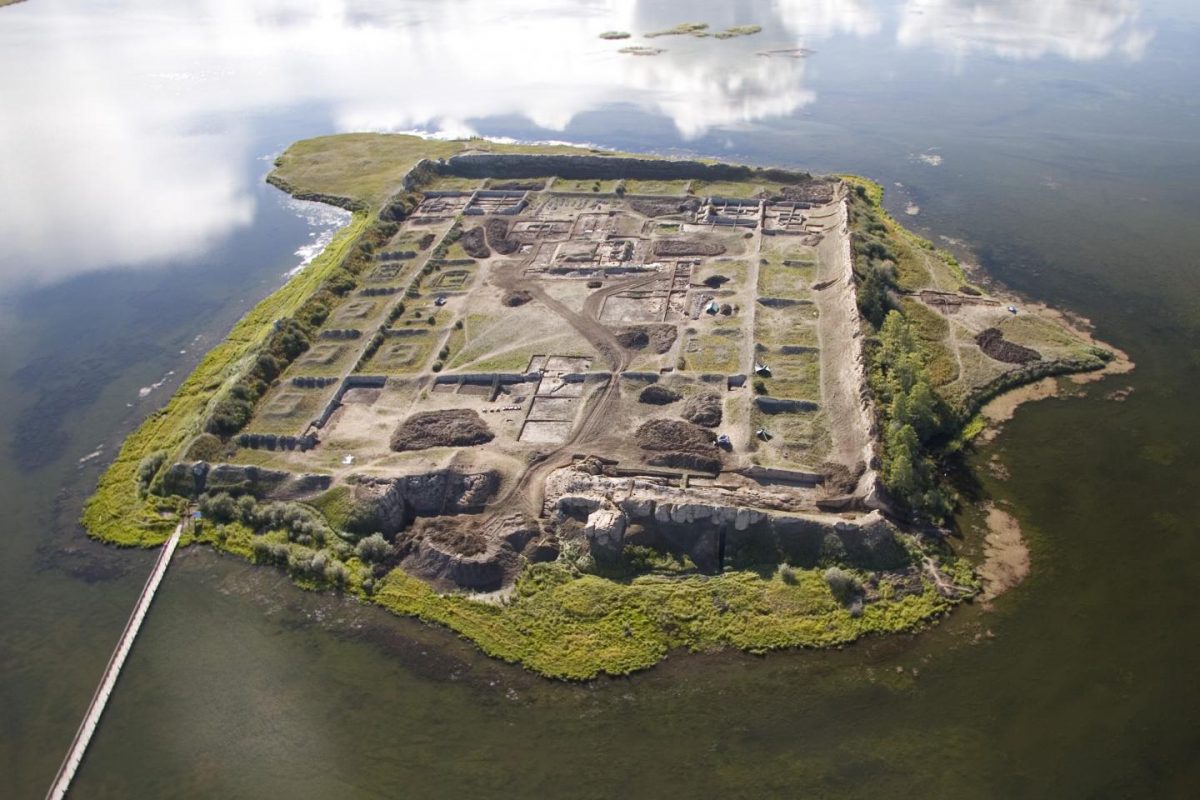 Construction of Uyghur complex dated to the year 777

Based on the presence of sudden spikes in carbon-14 concentration

Dating archaeological objects precisely is difficult, even when using techniques such as radiocarbon dating. Using a recently developed method, based on the presence of sudden spikes in carbon-14 concentration, scientists at the University of Groningen, together with Russian colleagues, have pinned the date for the construction of an eighth-century complex in southern Siberia to a specific year. This allows archaeologists to finally understand the purpose for building the complex — and why it was never used. The results were published in Proceedings of the National Academy of Sciences on 8 June.

The Por-Bajin complex, on the border of the Russian Federation and Mongolia, measures 215 x 162 metres and has outer walls of twelve metres high. All of the walls are made of clay (Por-Bajin translates as ‘clay house’) on a foundation of wooden beams. The complex was created by nomadic Uyghurs, sometime in the eighth century. But archaeologists did not know the purpose of the complex and why it appears to never have been used.

‘In order to understand this, the exact construction date was required to find out which local leader, or khan, gave the orders for the construction,’ explains Margot Kuitems, a postdoctoral researcher at the Centre for Isotope Research at the University of Groningen. She currently works on the Exact Chronology of Early Societies (ECHOES) project, funded by the European Research Council and led by Assistant Professor of Isotope Chronology Michael Dee, who is also an author on the PNAS paper.

For the early mediaeval period, radiocarbon dating is generally precise to a few decades. This is good enough for most applications. However, as khans came and went during the eighth century, the exact construction date was required to link it to a specific leader. Within the ECHOES project, Kuitems applied a recently developed method to date her samples exactly.

Carbon-14 (a radioactive isotope of carbon) is created in the upper atmosphere. Plants absorb carbon dioxide, which includes a tiny amount of carbon-14. When the plant – or the animal that ate the plant – dies, the carbon uptake stops and the carbon-14 slowly decays. Every 5,730 years, half of the carbon-14 decays. Therefore, the carbon-14 concentration tells you how old the object (animal, plant or any other organic material) is.

Production rates of carbon-14 in the atmosphere are not constant. However, changes in atmospheric carbon-14 were believed to show little variation from one year to the next. Then, in 2013, the Japanese Professor Fusa Miyake analysed individual tree rings and found a spectacular spike in carbon-14 content in the year 775. ‘When you find wood at an archaeological site from that period, you can look for the spike by measuring the carbon-14 content of subsequent tree rings,’ explains Kuitems. The spike tells you which tree ring grew in the year 775. And when the sample includes the bark, it is even possible to determine when the tree was felled.

This approach was used to analyse a beam taken from the very foundation of the Por-Bajin complex. The sample that they used had 45 rings, followed by the bark. Measurements showed that the spike that dated to the year 775 was present in the 43rd ring. ‘So, we knew the tree was felled in 777. Tree ring specialist and co-author Petra Doeve determined that the final, partial ring was created in the spring.’ In southern Siberia, there is a clear distinction between summer and winter wood.

Russian archaeologists previously reported that the entire complex was completed in a very short time, about two years. Por-Bajin is situated on an island in a lake and it was determined that the trees came from the surrounding area. ‘We are fairly certain that they were felled for the construction of the complex, and it is therefore highly likely that construction took place around 777.’ Previously, the site had been dated to 750, based on a runic inscription on a monument called the ‘Selenga Stone’, which described the construction of a large complex. In 750, Bayan-Chur Khan ruled the Uyghurs. He was married to a Chinese princess and this may explain why some Chinese influences were found in the Por-Bajin complex. ‘However, previous radiocarbon dating attempts already suggested that the buildings might be slightly younger.’

In the year 777, Tengri Bögü Khan was in charge. He had converted to Manichaeism, a gnostic religion that was strongly opposed. Indeed, Bögü Khan was killed during an anti-Manichaean rebellion in 779. ‘All this ties in neatly with the archaeological evidence,’ explains Kuitems. It is likely that the complex was built to serve as a Manichaean monastery. ‘This explains why it was never used after the anti-Manichaeans defeated Bögü Khan. If it had been a palace or a fortress, it is more likely that the victors would have moved in.’

The study shows how carbon-14 spikes can help to solve archaeological conundrums, says Kuitems: ‘This technology can be really useful in cases where an exact date is required.’ And as ever more spikes are identified, their uses will become more widespread.