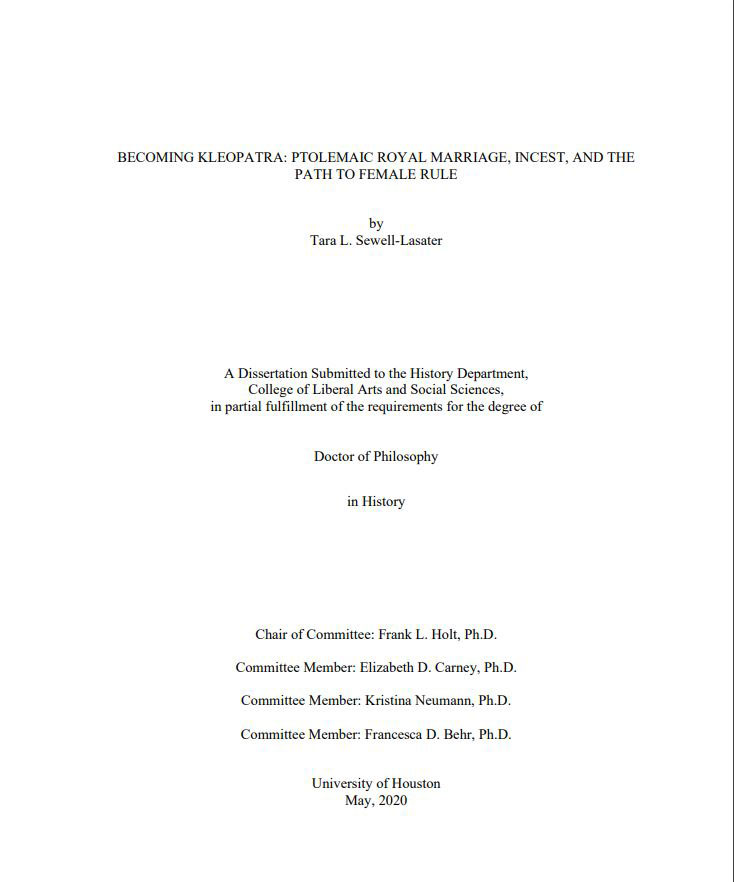 This dissertation provides the first overarching and comparative study of Hellenistic Egyptian queens; from the origins of the dynasty to the final ruler, Kleopatra VII.

The study explores the ways in which the Ptolemies developed a practice of royal incest, which was supplemented by the institution of a dynastic cult, during the reigns of the first three pharaohs of the dynasty. Their consorts and the later queens of the dynasty used their position as one half of the deified/ruling couple to gain increasing access to power. This culminated in several instances of co-rule, regency, and female sole-rule, with most Kleopatra VII as the most notable such case.

While the pharaohs of the dynasty have been comprehensively studied, the queens have been largely overlooked in the history of the Hellenistic world. Academia has, instead, relegated queens to the trope of the “powerless woman”; one which this study disproves by verifying that these queens did, in fact, act with ruling interests. This dissertation overturns the antiquated interpretations of these queens, which characterized them as either good (obedient/docile) or bad (ambitious/conniving), which still influence modern scholarship, much to the detriment of both the legacies of these women and ancient history in general.

Overall, this dissertation provides both rehabilitation of the reputations of these queens and the first informed and comprehensive overview of their ability to gain and wield public power. It will, ideally, also provide a methodology for similar studies that could be conducted on royal women elsewhere in the ancient world.

The study can be viewed and downloaded from here.