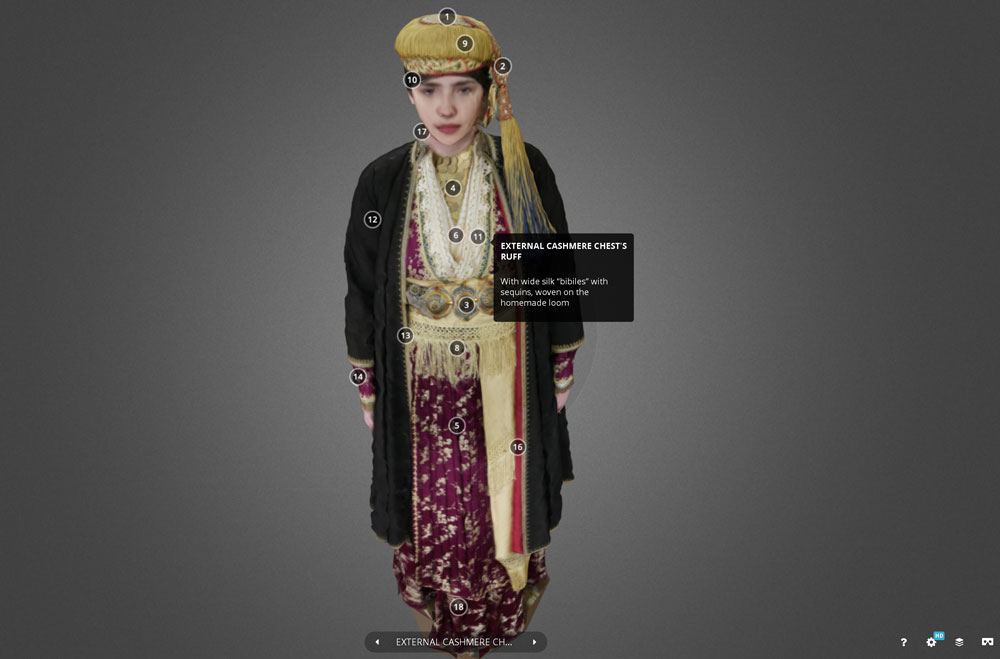 Traditional costume from Naoussa: Nr. 1 on sketchfab, the digital library

Digitalization by highschool students of the region

A high waisted closefitting bodice, a wide skirt with well ironed pleats, rich gold embroidery and lace in many intricate combinations are only some of the features of the traditional dress of Naoussa digitally depicted by 2nd and 3rd year high school students of the region, making it the first to be shown on sketchfab, the online global library of 3D models.

The mafesi (a square silk fabric folded to form a thin belt), the cashmere sleeves, the rare velvet and the tassel headdress “enchanted” everyone, making the digital traditional costume of the area to stand out.

Speaking on “Agency 104.9 FM”, the radio station of the Athens-Macedonia News Agency, mechanical engineer Alexandros Basiakoudis, a volunteer coordinator of this activity, explained that the goal was to bring students closer to both new technology, culture and cultural heritage.

The digitization lasted two weeks, during which the children scanned three objects: two pieces of machinery from Naoussa’s industrial heritage and the textile industry as well as a local costume. A dancer from the Lyceum of Greek Women of Naoussa put on the traditional costume and was depicted in 3D, with the costume and its colours. “We uploaded this model on the internet and it won the first place in the global ranking of the online library, the largest in 3D models”, said Mr. Basiakoudis.

The students, assisted by the professor, worked hard and enthusiastically  on the material’s digitization, which can be seen both on the page of “Let’Scan” on Facebook and the online library sketchfab.

At an event held in Naoussa, the mayor Nikos Karanikolas noted that this activity by Let’Scan has already been “embraced” by the municipality and assured that it will continue, so as to leave its mark on the town. The aim of the municipal authority, as he said, is to create a digital map with these innovative activities to digitally record  all the important monuments, landmarks, traditional items etc. that enhance the cultural heritage and history of the Municipality of Naoussa.