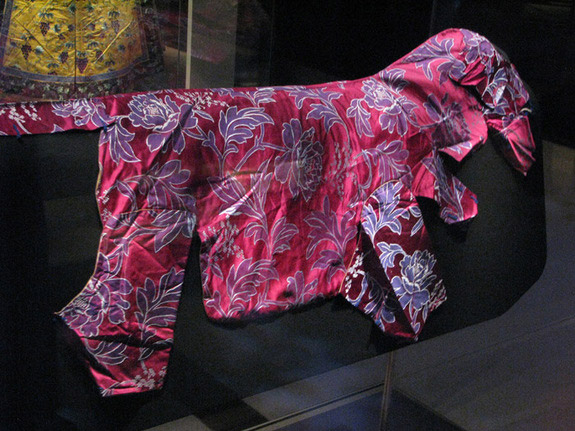 A single-piece costume made of silk which used to cover the body of a dog is on display during a special expedition about Beijing’s Forbidden City currently taking place at the Royal Ontario Museum, in Toronto, Canada.

As described in the book accompanying the exhibition, the outfit, decorated with images of peonies, was created at some point during the reign of the Guangxu emperor, who ruled (1875 -1908). The dog that used to wear it responded to a name translated as “Big Luck” in English -a name inscribed on the garment’s lining! The piece itself was big enough to cover the dog’s body from snout to tail and, although the animal’s brand is not known, it is estimated as of 3 feet (1 meter) long.

The garment was discovered in the Forbidden City, home to China’s emperors from 1420 to 1911, by the Toronto exhibition’s organizational team led by curator Chen Shen, during a trip they made to Beijing in order to collect artefacts for the exhibition.

“In the Forbidden City, royal dogs received royal treatment […]. They reportedly lived in pavilions with marble floors, sleeping on silk cushions, tended by specialized eunuchs who worked for the Dog Raising Office […]. Court ladies in particular entertained themselves by walking, playing with, and dressing up their dogs […]. Every year, dozens of luxurious dog outfits were commissioned, the pet’s name carefully recorded on the lining.”, Shen and co-author Wen-Chien Cheng,  also a curator at the Royal Ontario Museum, write in their book “The Forbidden City: Inside the Court of China’ s Emperors”.

Big Luck, the garment’ s owner must have been one of the last of those lucky dogs.  Being blocked from the outside world, the Forbidden City was tresspassed for the first time in 1900 by a foreign army who looted it, while China’s last Emperor Pu-Yi forcibly abandoned it in 1911. Alongside him, the Chinese Imperial Court lifestyle, including dog-keeping, vanished. Still, as stated by Live Science’s author Owen Jarus, the emperors left a canine legacy that is still with us today.”Many of the world’s most popular lapdogs, such as the Pekinese jinghabagou and pug, originated in China,” the curators write.