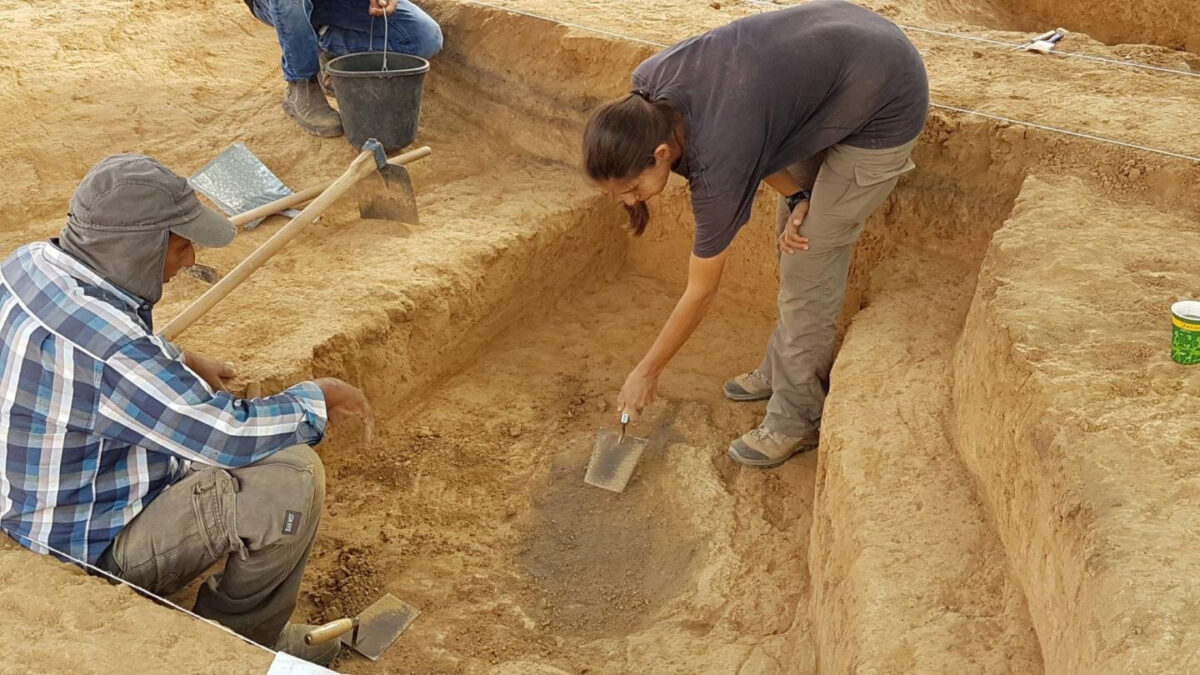 The capital of the Negev Desert

A new study by Tel Aviv University and the Israel Antiquities Authority indicates that a workshop for smelting copper ore once operated in the Neveh Noy neighborhood of Beer Sheva, the capital of the Negev Desert.

The study, conducted over several years, began in 2017 in Beer Sheva when the workshop was first uncovered during an Israel Antiquities Authority emergency archeological excavation to safeguard threatened antiquities.

The new study also shows that the site may have made the first use in the world of a revolutionary apparatus: the furnace.

The study was conducted by Prof. Erez Ben-Yosef, Dana Ackerfeld, and Omri Yagel of the Jacob M. Alkow Department of Archeology and Ancient Near Eastern Civilizations at Tel Aviv University, in conjunction with Dr. Yael Abadi-Reiss, Talia Abulafia, and Dmitry Yegorov of the Israel Antiquities Authority and Dr. Yehudit Harlavan of the Geological Survey of Israel. The results of the study were published online on September 25, 2020, in the Journal of Archaeological Science: Reports.

According to Ms. Abulafia, Director of the excavation on behalf of the Israel Antiquities Authority, “The excavation revealed evidence for domestic production from the Chalcolithic period, about 6,500 years ago. The surprising finds include a small workshop for smelting copper with shards of a furnace — a small installation made of tin in which copper ore was smelted — as well as a lot of copper slag.”

Although metalworking was already in evidence in the the Chalcolithic period, the tools used were still made of stone. (The word “chalcolithic” itself is a combination of the Greek words for “copper” and “stone.”) An analysis of the isotopes of ore remnants in the furnace shards show that the raw ore was brought to Neveh Noy neighborhood from Wadi Faynan, located in present-day Jordan, a distance of more than 100 kilometers from Beer Sheva.

During the Chalcolithic period, when copper was first refined, the process was made far from the mines, unlike the prevalent historical model by which furnaces were built near the mines for both practical and economic reasons. The scientists hypothesize that the reason was the preservation of the technological secret.

“It’s important to understand that the refining of copper was the high-tech of that period. There was no technology more sophisticated than that in the whole of the ancient world,” Prof. Ben-Yosef says. “Tossing lumps of ore into a fire will get you nowhere. You need certain knowledge for building special furnaces that can reach very high temperatures while maintaining low levels of oxygen.”

Prof. Ben-Yosef notes that the archeology of the land of Israel shows evidence of the Ghassulian culture. The culture was named for Tulaylât al-Ghassûl, the archeological site in Jordan where the culture was first identified. This culture, which spanned the region from the Beer Sheva Valley to present-day southern Lebanon, was unusual for its artistic achievements and ritual objects, as evidenced by the copper objects discovered at Nahal Mishmar and now on display at the Israel Museum in Jerusalem.

According to Prof. Ben-Yosef, the people who lived in the area of the copper mines traded with members of the Ghassulian culture from Beer Sheva and sold them the ore, but they were themselves incapable of reproducing the technology. Even among the Ghassulian settlements along Wadi Beer Sheva, copper was refined by experts in special workshops. A chemical analysis of remnants indicates that every workshop had its own special “recipe” which it did not share with its competitors. It would seem that, in that period, Wadi Beer Sheva was filled with water year-round, making the location convenient for smelting copper where the furnaces and other apparatus were made of clay.

Prof. Ben-Yosef further notes that, even within Chalcolithic settlements that possessed both stone and copper implements, the secret of the gleaming metal was held by the very few members of an elite. “At the beginning of the metallurgical revolution, the secret of metalworking was kept by guilds of experts. All over the world, we see metalworkers’ quarters within Chalcolithic settlements, like the neighborhood we found in Beer Sheva.”

The study discusses the question of the extent to which this society was hierarchical or socially stratified, as society was not yet urbanized. The scientists feel that the findings from Neveh Noy strengthen the hypothesis of social stratification. Society seems to have consisted of a clearly defined elite possessing expertise and professional secrets, which preserved its power by being the exclusive source for the shiny copper. The copper objects were not made to be used, instead serving some ritual purpose and thus possessing symbolic value. The copper axe, for example, wasn’t used as an axe. It was an artistic and/or cultic object modeled along the lines of a stone axe. The copper objects were probably used in rituals while the everyday objects in use continued to be of stone.

“At the first stage of humankind’s copper production, crucibles rather than furnaces were used,” says Prof. Ben-Yosef. “This small pottery vessel, which looks like a flower pot, is made of clay. It was a type of charcoal-based mobile furnace. Here, at the Neveh Noy workshop that the Israel Antiquities Authority uncovered, we show that the technology was based on real furnaces. This provides very early evidence for the use of furnaces in metallurgy and it raises the possibility that the furnace was invented in this region.

“It’s also possible that the furnace was invented elsewhere, directly from crucible-based metallurgy, because some scientists view early furnaces as no more than large crucibles buried in the ground,” Prof. Ben-Yosef continues. “The debate will only be settled by future discoveries, but there is no doubt that ancient Beer Sheva played an important role in advancing the global metal revolution and that in the fifth millennium BCE the city was a technological powerhouse for this whole region.”