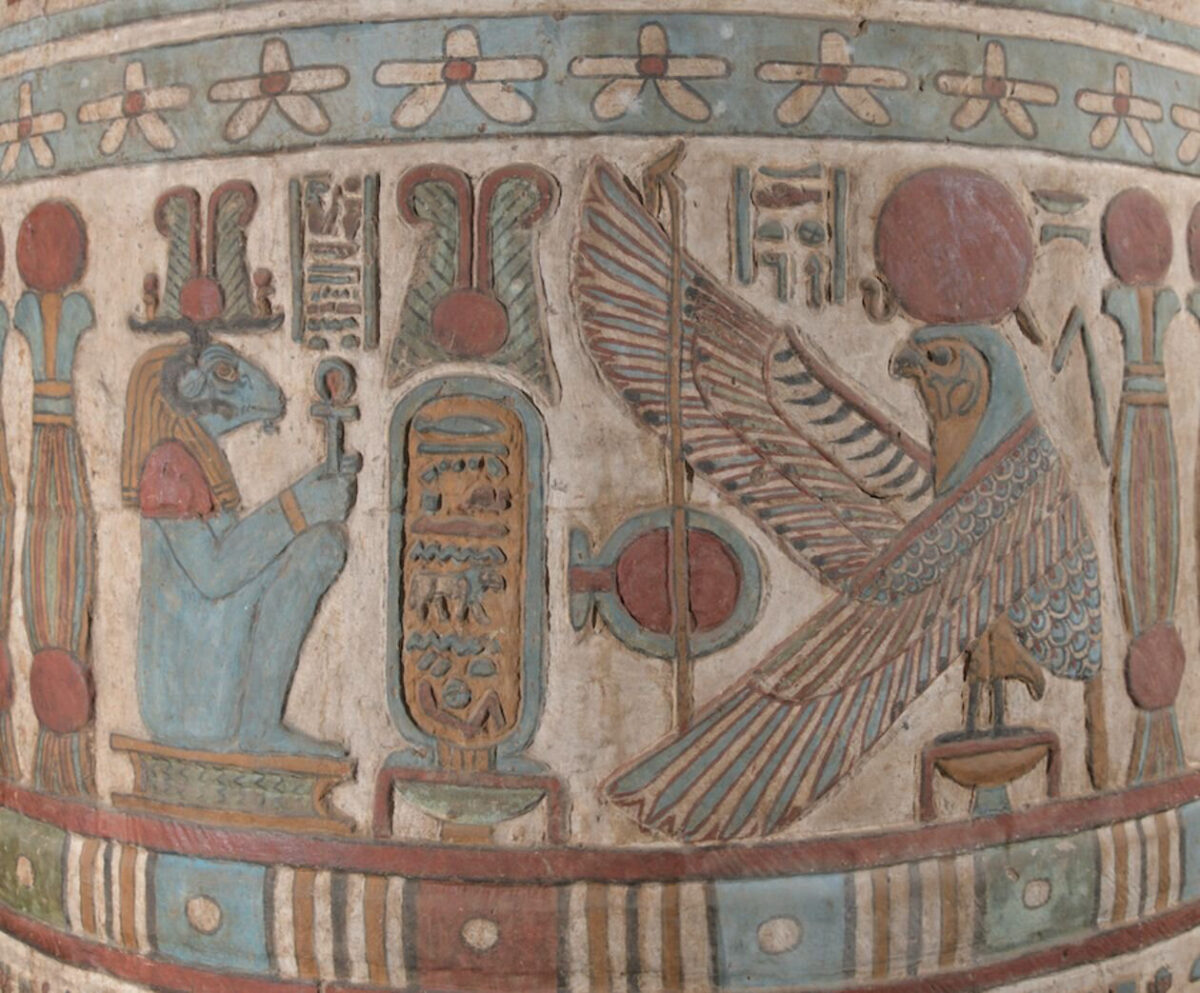 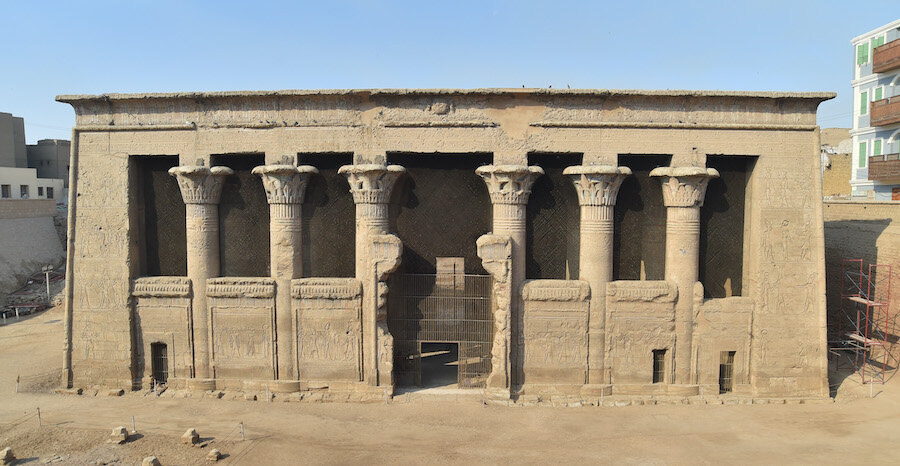 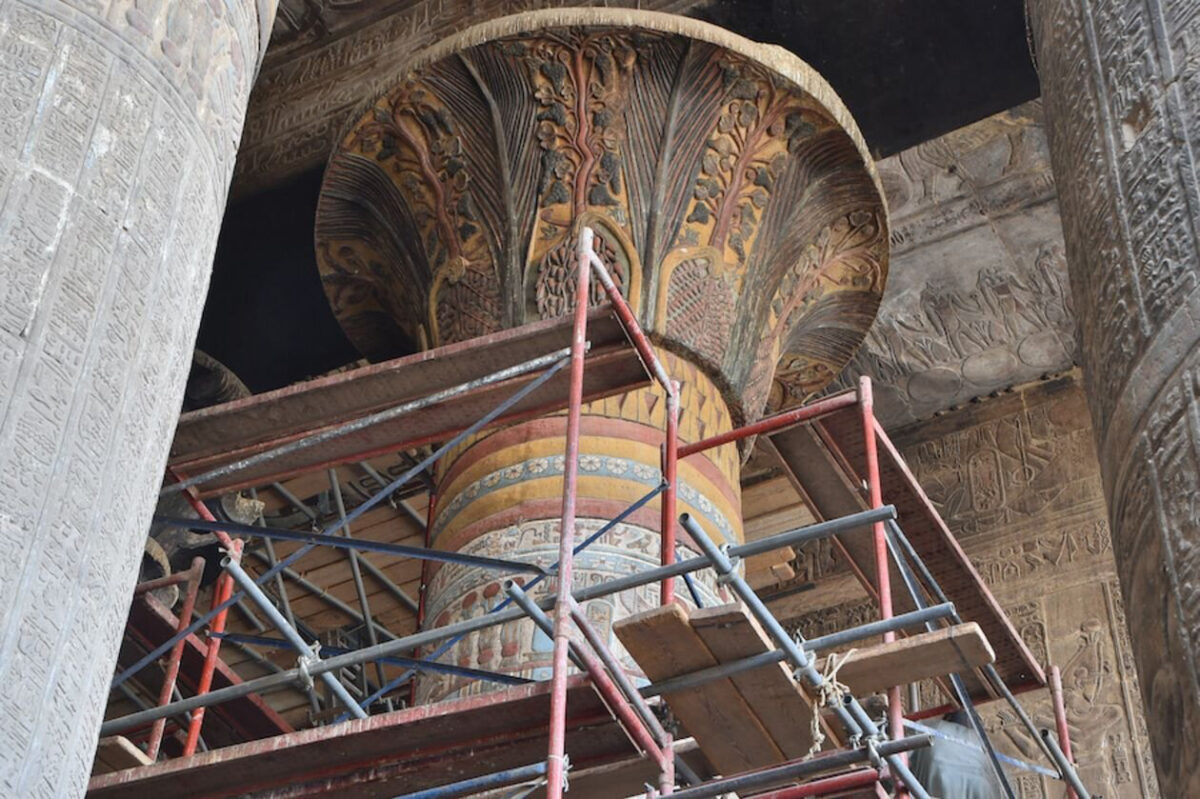 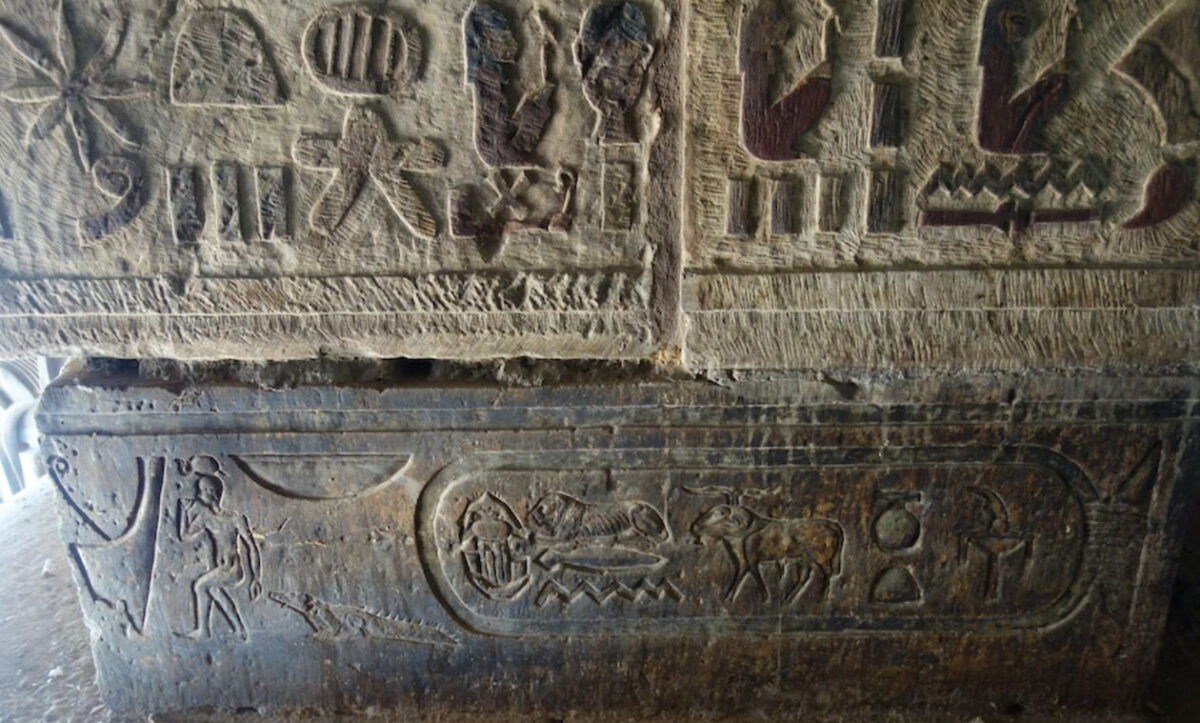 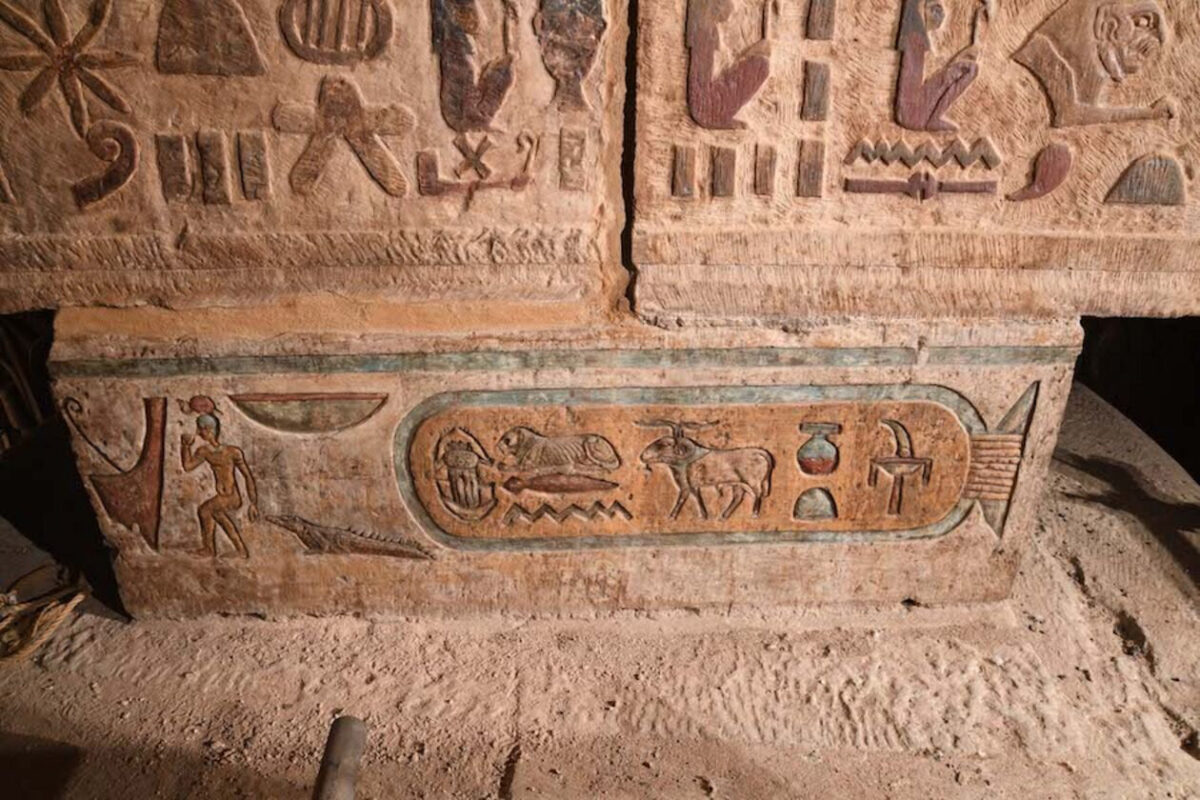 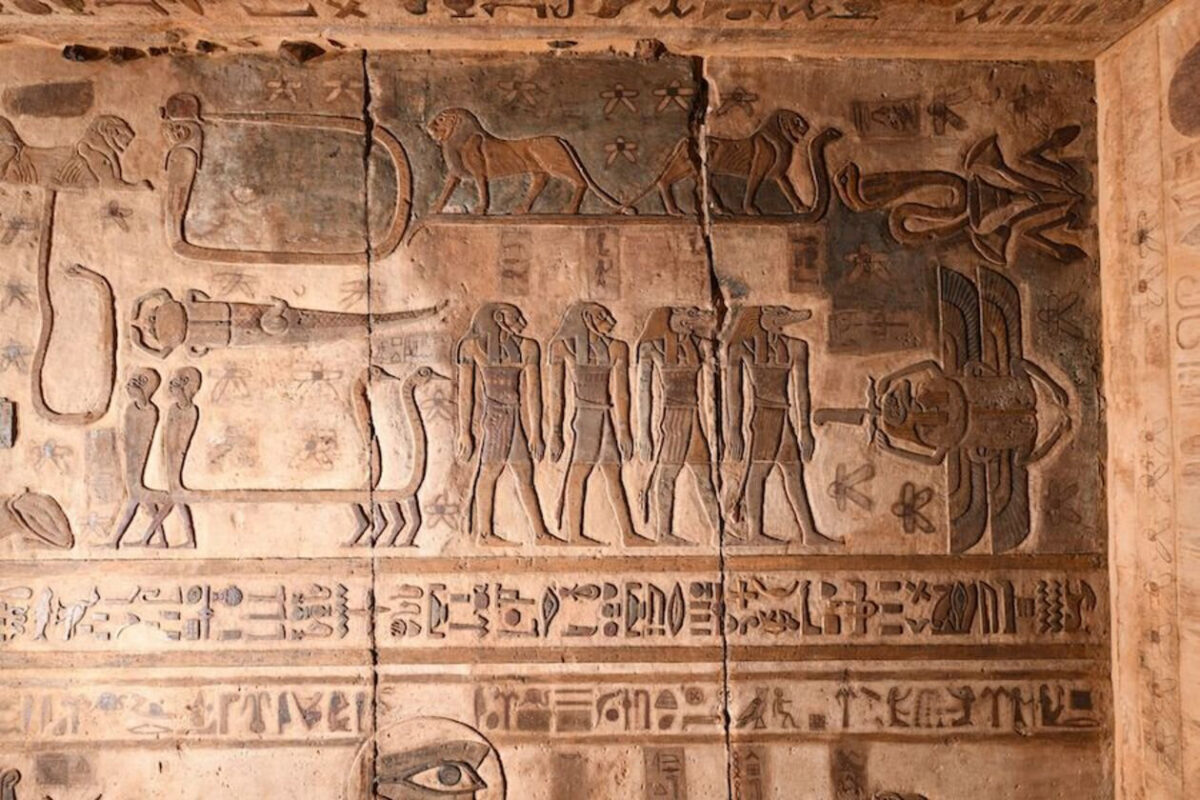 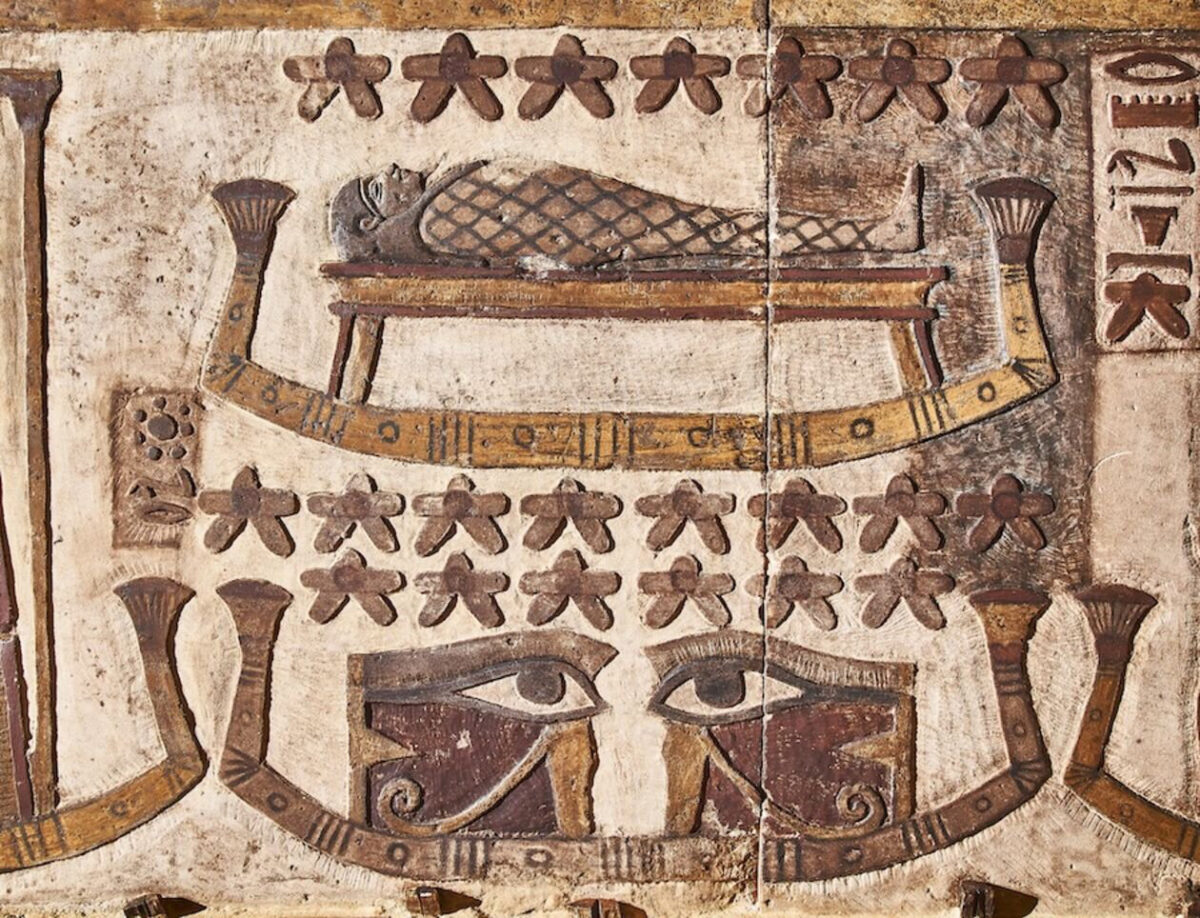 Original pigments of inscriptions at the temple of Esna found

More than 200 years after the rediscovery of the temple

More than 200 years after the rediscovery of an Egyptian temple, a German-Egyptian research team has uncovered the original colors of inscriptions that are around 2,000 years old. Freed from thick layers of soot and dirt, the reliefs and inscriptions can now be admired again in bright colors. The project, led by Egyptologist Professor Christian Leitz, also discovered new inscriptions that reveal the ancient Egyptian names of constellations for the first time. The restoration work is a cooperation between the Institute for Ancient Near Eastern Studies (IANES) at the University of Tübingen and the Egyptian Ministry of Tourism and Antiquities.

The temple is in Esna, 60 kilometers south of Luxor in Egypt. Only the vestibule (called the pronaos) remains, but it is complete. At 37 meters long, 20 meters wide and 15 meters high, the sandstone structure was placed in front of the actual temple building under the Roman Emperor Claudius (41-54 AD) and probably eclipsed it. The roof is supported by 24 columns, the capitals of the 18 free-standing columns are decorated with different plant motifs. “In Egyptian temple architecture this is an absolute exception,” says Tübingen Egyptologist Daniel von Recklinghausen.

The work on the elaborate decorations probably took up to 200 years. The temple of Esna is famous for its astronomical ceiling and especially for the hieroglyphic inscriptions. They are considered to be the most recent coherent hieroglyphic text corpus that has been preserved today and which describes the religious ideas of the time and the cult events at the site.

Its location in the middle of the city center probably contributed to the fact that the vestibule was preserved and was not used as a quarry for building materials as other ancient edifices were during the industrialization of Egypt. Indeed, the temple had become part of the modern city. Houses and shacks were built directly against some of its walls, in other places it protruded from a mountain of rubble, as can be seen on postcards from the 19th and early 20th centuries. In the first half of the 19th century, the hall served temporarily as a warehouse for cotton.

As early as in Napoleon’s time, the pronaos attracted attention in expert circles, as it was considered an ideal example of ancient Egyptian temple architecture. The real wealth, the inscriptions, was recognized by the French Egyptologist Serge Sauneron (1927-1976), who pushed ahead with the excavation of the temple and published the inscriptions in full. But without the original colors—Sauneron could not recognize them under the layers of soot and bird excrement.

Now the layers have been removed and the temple looks in part as it may have done some 2,000 years ago. In addition, it now offers new approaches for Egyptology research, says Christian Leitz, “The hieroglyphics that Sauneron explored were often only very roughly chiseled out, the details only applied by painting them in color. This means that only preliminary versions of the inscriptions had been researched. Only now do we get a picture of the final version.” In the area of the astronomical ceiling, many inscriptions were not executed in relief, but only painted in ink. “They were previously undetected under the soot and are now being exposed piece by piece. Here we have found, for example, the names of ancient Egyptian constellations, which were previously completely unknown,” says Leitz.

Since 2018, the two Tübingen researchers have been working with Egyptian authorities to uncover, preserve and document the paint layers. Even during the coronavirus pandemic, the work is being continued by an Egyptian team of 15 restorers and a chief conservator from the Egyptian Ministry. At regular intervals, the results are documented photographically in documentation campaigns. At the University of Tübingen, the finds are evaluated in terms of content and made available to the public via publications. Cooperation partners on the Egyptian side are Dr. Hisham El-Leithy, Mohamed Saad, Ahmed Amin, Mustafa Ahmed, Ahmed Emam. The project is supported by the Gerda Henkel Foundation, the Ancient Egypt Foundation and the Santander Bank.