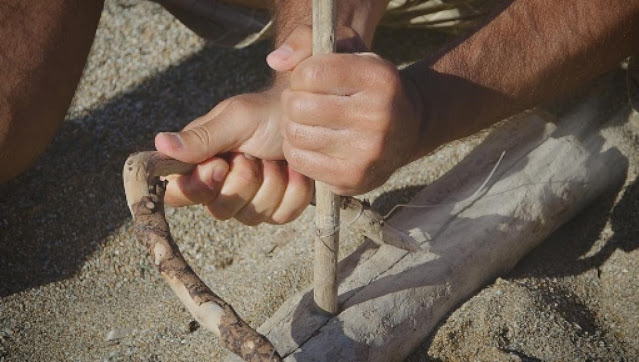 Genetic research by scientists from Leiden and Wageningen

The idea that modern humans displaced Neanderthals because they were better protected against toxins from smoke is now under fire. An earlier study that put forward this suggestion has now been refuted by genetic research by scientists from Leiden and Wageningen.

Making and using fire is regarded as one of the most significant innovations in man’s evolution. Fire brought with it such benefits as warmth, for example, protection against predators and a broader diet because it made it possible to cook raw, inedible foods. Traces of fire do not preserve well, so it is far from clear when fire-making skills developed and whether Neanderthals have have already had these skills for a long time.

A disadvantage of fire is that it exposes people to the toxic substances in smoke. In 2016, two contradictory genetic studies appeared on whether modern humans or Neanderthals were better able to tolerate the toxins produced by smoke. A group of American scientists studied a receptor protein (the aryl hydrocarbon receptor or Ah receptor) that is sensitive to toxins found in smoke and is different in the two hominids. They concluded that Neanderthals were up to a thousand times more sensitive to these toxins than modern humans.

The other group comprised Leiden researchers including Professor of Archaeology Wil Roebroeks and molecular biologist/toxicologist Jac Aarts. Together with colleagues from Wageningen University & Research, they came to the opposite conclusion, based on studies of 19 different genes. They found that Neanderthals had more gene variants that neutralized the harmful effects of toxins than most modern-day humans.

The protective gene variants in Neanderthals seem to be older variants in evolutionary terms that also protect people against toxins from plants. This is probably the evolutionary explanation for the presence of these genes in early hominids.

Aarts and his Leiden and Wageningen colleagues have now repeated the earlier study by their North American colleagues. They used a new research design for their experiment that gave them a better approach to human biology. They used human cells rather than the rat cells that their predecessors had used. They found that there are no grounds for concluding that this receptor protein made Neanderthals more vulnerable to toxins from smoke.

Prehistoric use of fire is one of the focal areas in Leiden’s archaeology research. Earlier studies in Leiden have shown that early hominids probably survived for many thousands of years in Europe without access to fire. It was Leiden archaeologists who in 2018 were the first to demonstrate the use of fire by early hominids. Leiden archaeologists also put the worldwide use of fire in shaping landscapes by hunter-gatherers promenently on the map. This study is currently very topical because of the problematic increase in natural fires in Australia and America.

The new findings by Aarts and his colleagues have wider importance than only to our knowledge of early hominids. This publication emphasizes the key importance of the function of proteins in their relevant biological context.

The research was published in Molecular Biology and Evolution.