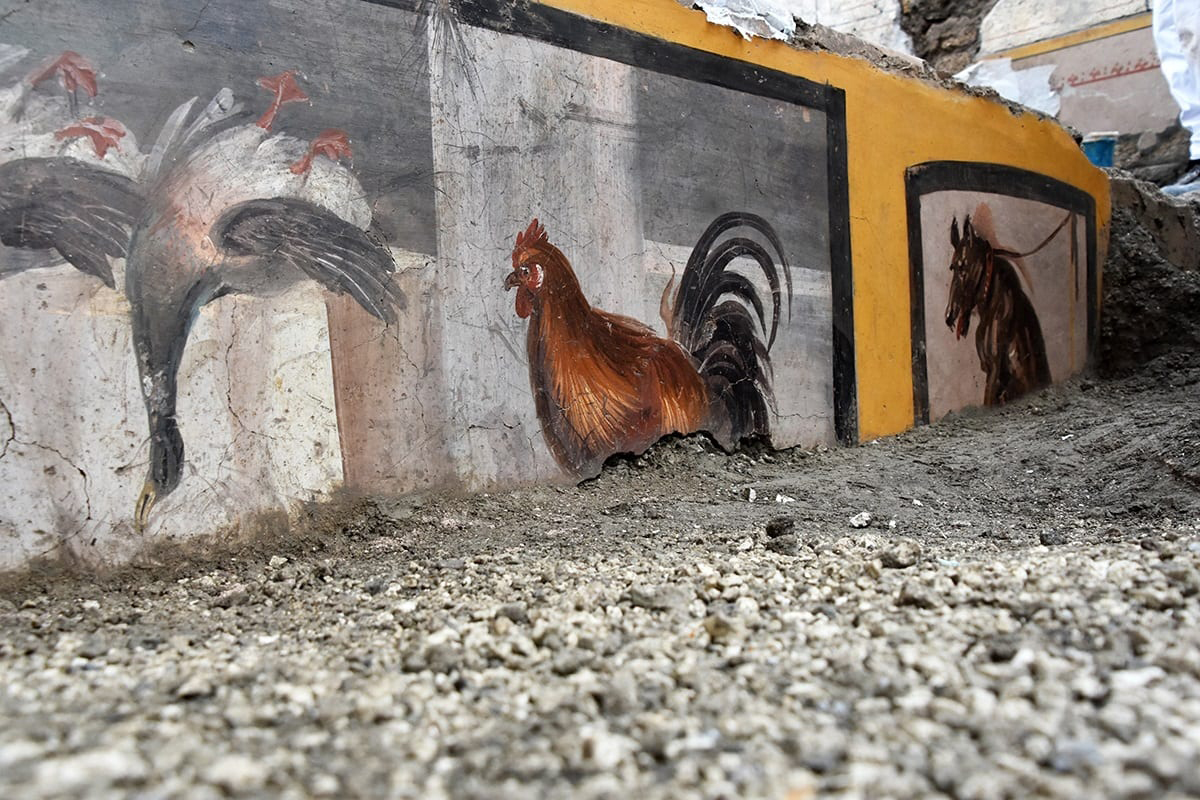 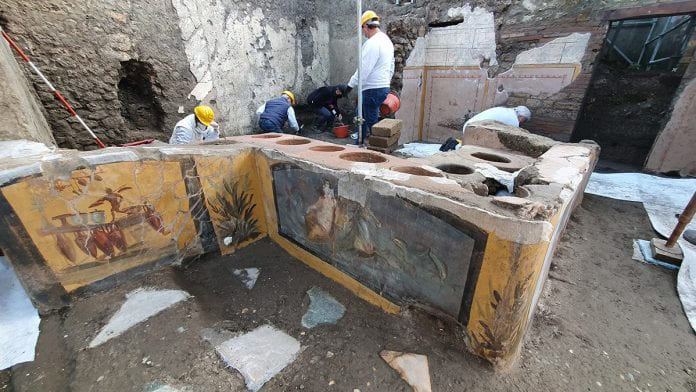 Still life scenes of animals that were likely butchered and sold

Archaeologists conducting excavations at the Thermopolium of Regio V in the Roman city of Pompeii have revealed an ancient ‘fast food’ counter.

Pompeii was a Roman city, located in the modern commune of Pompeii near Naples in the Campania region of Italy. Pompeii, along with Herculaneum and many villas in the surrounding area was buried under 4 to 6 m (13 to 20 ft) of volcanic ash and pumice in the eruption of Mount Vesuvius in AD 79.

At its peak, Pompeii had a population of around 20,000 inhabitants and became an important passage for goods that arrived by sea to be sent toward Rome or Southern Italy along the nearby Appian Way.

Excavations of the commercial ‘fast food’ structure first began in 2019 in an area between the Vicolo delle Nozze d’Argento and the Vicolo dei Balconi, where archaeologists previously unearthed an image of a Nereid nymph riding a seahorse, and a scene depicting gladiators in combat.

In the latest phase of excavations, archaeologists discovered still life scenes of animals that were likely butchered and sold, along with bones of the corresponding animals that match the scenes inside containers embedded in the counter.

Depictions include two mallard ducks shown upside down, a rooster, and a dog on a lead which is suggested to be a warning to customers in the manner of the Cave canem ‘beware of the dog’ mosaic at the entrance to the House of the Tragic Poet in Pompeii.

A mocking inscription has also been found scratched onto the counter frame which surrounds the painting of the dog: NICIA CINAEDE CACATOR – translated as “Nicias (probably the name of a freedman from Greece) Shameless Shitter!”

Massimo Osanna, Interim Director General of the Archaeological Park of Pompeii said: “As well as being another insight into daily life at Pompeii, the possibilities for study of the Thermopolium are exceptional, because for the first time an area of this type has been excavated in its entirety, and it has been possible to carry out all the analyses that today’s technology permits.”

Osanna added: “The finds will be analysed in the laboratory, and in particular those remains found in the dolia (terracotta containers) which are expected to yield exceptional data for informing an understanding of what was sold and what the diet was like”.