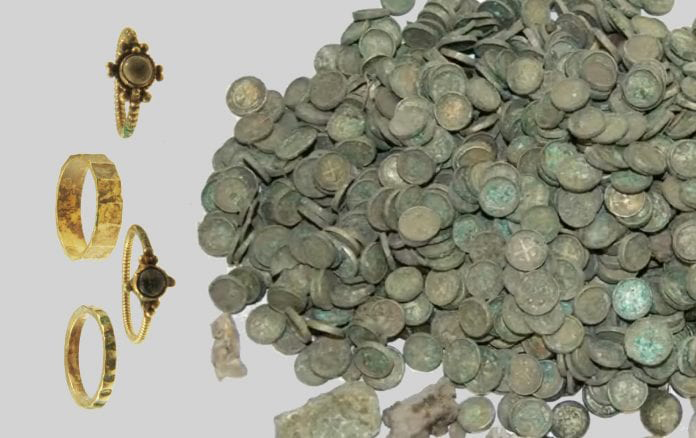 Archaeologists conducting excavations in a field near the village of Słuszków in Poland, have discovered thousands of silver artefacts dating back nearly 900 years.

A team from the Institute of Archaeology and Ethnology of the Polish Academy of Sciences made the discovery after researchers were sent to photograph a previous coin haul site (Poland’s largest coin haul discovered in 1935), and were informed by the local villagers of rumours of another buried treasure in the vicinity.

This led to a systematic study at the intersection of three plots of land in the northern part of the village. After failing to find any evidence of the treasure, the team turned their attention to a field near the village road where they discovered a ceramic vessel containing denarii, with the overall haul consisting of 6,500 silver coins arranged in linen pouches, silver ingots, two gold rings, and two wedding bands.

Archaeologist Dariusz Wyczółkowski from the Institute of Archaeology and Ethnology Polish Academy of Sciences said: “The rings were probably made using precious stones, polished in a semi-circular way. They are additionally decorated with golden granules. The larger ring is tapered and polygonal, and the smaller one is bar-shaped, with punched holes.”

One of the rings has an inscription which reads: “Lord, may you help your servant Maria” – which researchers believe may have belonged to a Ruthenian princess named Maria, who was the daughter of Svyatoslavovich Isiaslavovich, Prince of Kiev, and the sister-in-law of the 12-century Polish king, Bolesław III Wrymouth, also known as Boleslaus III the Wry-mouthed.

Dr Kędzierski told FirstNews that: “We know that at that time, the wife of Bolesław the Wrymouth was a Russian princess named Zbysława. According to the literature, she was supposed to have a sister Maria,” who was married to Piotr Włostowic, a Polish noble, and ruler (możnowładca) of part of Silesia.

Following the capture of Prince Volodar of Peremyshl’ by Piotr Włostowic, it is believed that the haul may have been part of a dowry intended for Maria that was hidden near Słuszków. Professor Adrian Jusupović from the Institute of History of the Polish Academy of Sciences in Warsaw suggests that: “Her husband’s position and property may have prompted her to deposit the dowry, which was later joined by the wedding ring. Perhaps the deposit was made in 1145/1146 during his [Piotr Włostowic’s] escape from Poland.