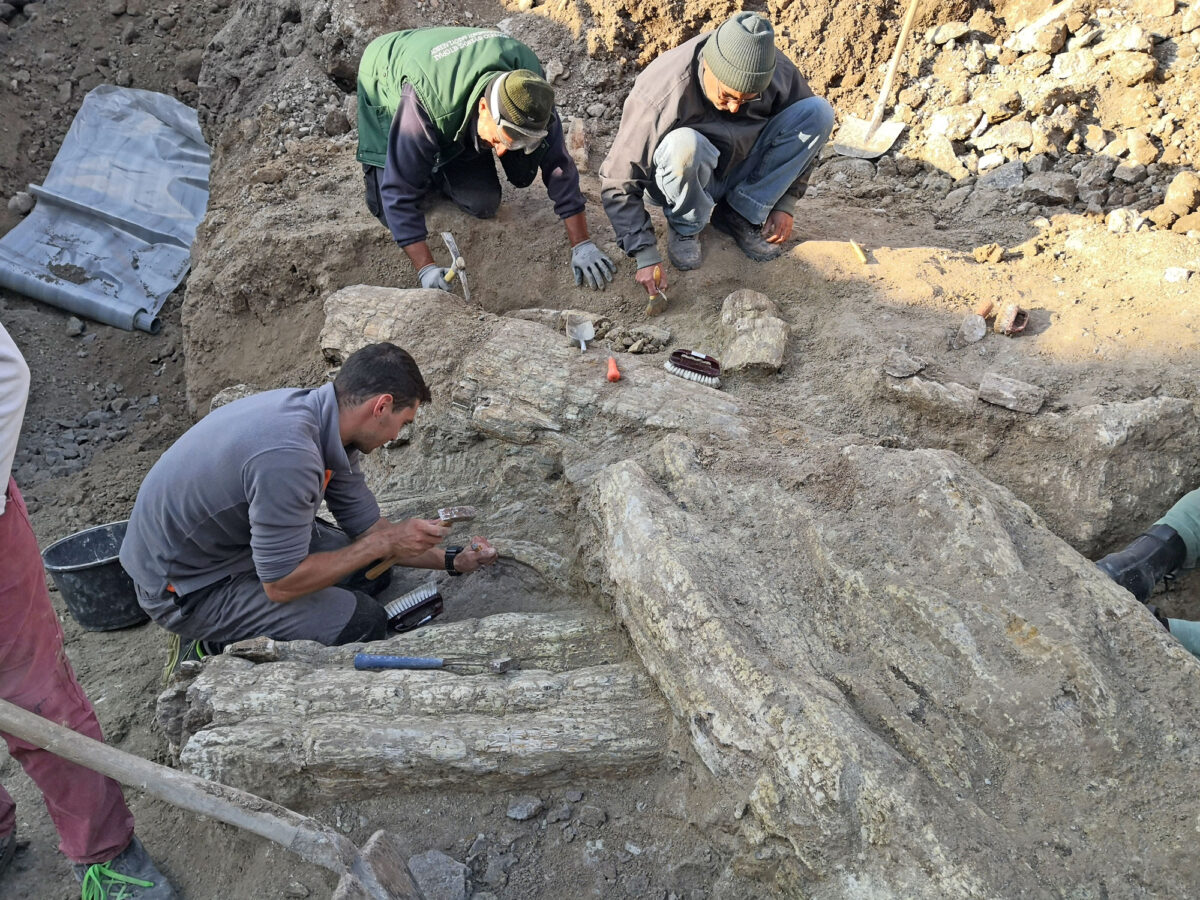 Lesvos: What is revealed by approximately 50 fossilized tree trunks

Found in new excavations of the fossil forest

Around 50 fossilized tree trunks in successive layers form a unique and shocking picture of the catastrophe of an ecosystem caused by a gigantic volcanic eruption like those of Santorini in 1630 BC or Vesuvius in 79 AD. These fossils were being discovered right up to New Year’s Eve, during rescue excavations in the petrified forest region of Lesvos.

“We have encountered similar pictures only from the eruption of Mount St. Helens volcano in the USA in 1980, which caused the destruction of a Sequoia forest in Washington State” said Professor Nikos Zouros, Director of the Natural History Museum of the Lesvos Petrified Forest in Sigri.

The rescue excavations were being conducted because of construction works on the new Kalloni-Sigri highway  that crosses the protected area. The findings are being retrieved and preserved at a fast pace, so they can then be displayed in special places along the new highway which will be transformed into an open air museum of a 20 million year old natural history, the only one of its kind in Greece.

“The discovery of the site was made almost accidentally during excavations for the construction of a drainage pipeline in the district of Akrochira, near Sigri” said Mr Zouros.

In early November, 14 fossilized trunks of large and small coniferous and fruit trees of different ages were identified. Having been recorded in detail, the fossilized trunks were carefully transported to a safe place for study, preservation and display.

A complete excavation of this first group of fossils revealed however that it was situated on top of another trunk assemblage with similar features regarding its size and numerous findings. An identical recording and excavation procedure was followed for the second group of finds coming from the same mixed forest of coniferous and fruit trees growing 18 million years ago on the slopes of today’s mount Ordymnos. The finds were then transferred from the site to the laboratories of the Natural History Museum.

“All the same,” said Mr. Zouros, “we had not reached the end of the excavation.

In mid -December new fossil trunks were found on the east side of the trench and for that reason the excavation was expanded to also unearth the new important findings now numbering almost 50 fossil trunks.”

The catastrophe and fossilization

According to the scientist, “the new findings are evidence of the violent volcanic eruptions that covered Lesvos with their volcanic matter 18 million years ago.”

The trunks of the forest trees were broken and swept away like matchboxes by the gases of the volcanic eruptions. Large amounts of volcanic ash covered the vegetation in a large area around the volcano.

Giant mudflows blocked the valleys, piling up tree trunks and creating small “dams” that prevented silicon-rich mud and fluids moving towards the sea. In this environment, the organic molecules of the wood were replaced by silicon dioxide causing fossilization. Thus the blocked valleys were turned into important archives of the Petrified Forest of Lesvos.

The finds and their value

Summing up the findings of the year, Mr. Zouros claimed that “many new important fossil sites have been added to the already known ones, revealing a number of fresh facts about the subtropical forest on Lesvos 20 million years ago. The new findings add more information about the species existing in the forest but also the climatic conditions prevailing in the region”.

Regarding the importance of everything mentioned above, Mr Zouros concluded by saying “the ongoing scientific research in the region of the Petrified Forest by the Natural History Museum, in collaboration with Universities and Research Centres from Greece and abroad, has raised scientific interest internationally. At the same time many interesting facts have emerged regarding the volcanoes’ location, the origin of the volcanic matter that covered the vegetation creating the Petrified Forest, the prevailing climatic conditions and the violence of the volcanic eruptions during the Miocene period in the Northern Aegean”.