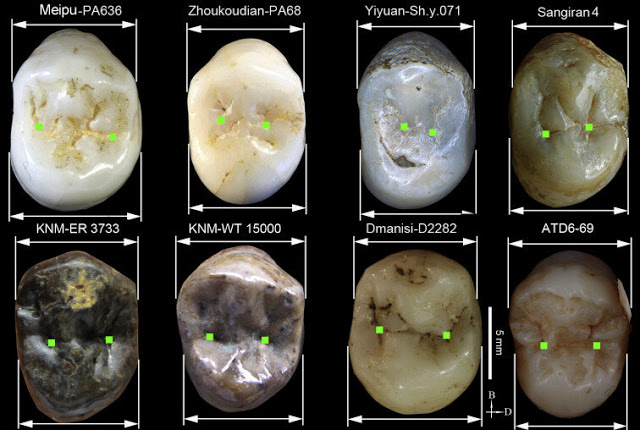 Meipu teeth shed light on the human settlement of Asia

María Martinón-Torres and José María Bermúdez de Castro, researchers at the Centro Nacional de Investigación sobre la Evolución Humana (CENIEH), have participated in a study published in the Journal of Human Evolution, on one of the few human fossils known from late Early Pleistocene China, the Meipu teeth, which provides new information on the early settlement of continental Asia.

These are four dental pieces encountered at the start of the 1970s in the locality of Meipu, southern China. These teeth. dated to between 780,000 and 990,000 years old, present a series of primitive characteristics that distinguish them from Homo erectus, the predominant species on the Asian continent during most of the Pleistocene.

The CENIEH researchers, together with scientists from the Institute of Vertebrate Paleontology and Paleoanthropology (IVPP) in Beijing, have studied this sample, which had not been analyzed for five decades using image techniques not then available, like computerized axial microtomography, and compared it with today’s much more abundant fossil record.

“These teeth are one of the few manifestations we have from China of the earliest migrations out of Africa,” comments Bermúdez de Castro, coordinator of the Paleobiology Program at the CENIEH. To date, the oldest fossils outside the African continent were found at the Dmanisi site in the Republic of Georgia and have been dated to 1.8 million years ago.

The Meipu fossils lack the specializations which characterize classic Homo erectus, such as the deep wrinkles or ‘crenulations’ in the dentin, the tissue lying below the dental enamel. Between the Dmanisi fossils and those of classic Homo erectus from China, the majority of which belong to the Early Pleistocene, between 300,000 and 500,000 years ago, there is an important gap that hinders comprehension of what happened between the first arrival of hominins in continental Asia and the advent of Homo erectus.

In certain characteristics, like the moderate convexity of the incisors or the shape of the upper premolar, the Meipu teeth are more similar to those from human populations of the Early Pleistocene, such as Homo ergaster, or the hominins found at Dmanisi. “We believe that the Meipu fossils predate the appearance of Homo erectus,” says Martinón-Torres, a CENIEH researcher, and also its director.

Even though they have similar chronologies, the researchers highlight the differences from Homo antecessor, the species found at the Gran Dolina site in Atapuerca (Burgos). “Meipu continues to tell an African story, while Homo antecessor has already embarked on its own truly European journey,” concludes Martinón-Torres.