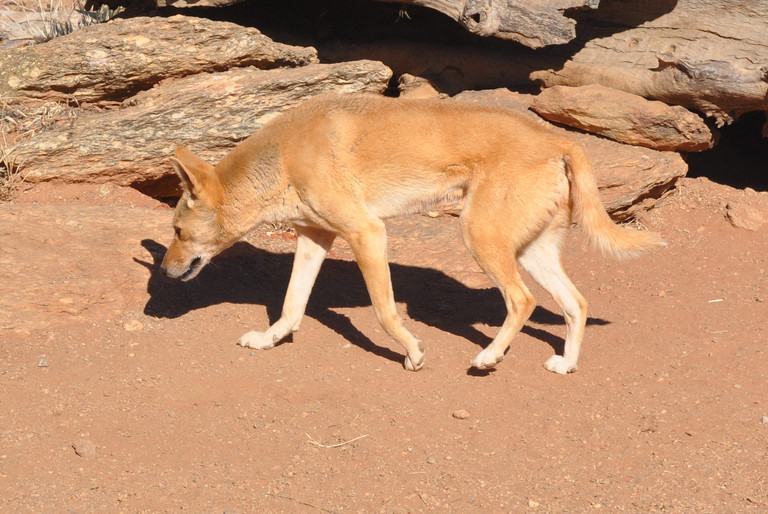 Wolves, dogs and dingoes, oh my

An analysis by a retired Penn State anthropologist

“Indigenous Australians understood that there was something different about the dingoes and the colonial dogs,” said Pat Shipman, retired adjunct professor of anthropology, Penn State.  “They really are, I think, different animals. They react differently to humans. A lot of genetic and behavioral work has been done with wolves, dogs and dingoes. Dingoes come out somewhere in between.”

Wolves, dogs and dingoes are all species of the canidae family and are called canids. In most animals, hybridization between closely related species does not happen, or like female horses and male donkeys, produce mules — usually non-fertile offspring.  However, many canid species, including wolves, dingoes and dogs, can interbreed and produce fertile offspring. Defining species boundaries in canids becomes more difficult.

Domestic dogs came to the Australian continent in 1788 with the first 11 ships of convicts, but dingoes were already there, as were aboriginal Australians who arrived on the continent about 65,000 years ago. A large portion of dingoes in Australia today have domestic dog in their ancestry, but dingoes came to Australia at least 4,000 years ago according to fossil evidence. Shipman believes that date may be even earlier, but no fossils have yet been found.

“Part of the reason I’m so fascinated with dingoes is that if you see a dingo through American eyes you say, ‘that’s a dog,'” said Shipman. “In evolutionary terms, dingoes give us a glimpse of what started the domestication process.”

Shipman reports her analysis of wolves, dogs and dingoes in a January 2021 special issue of the Anatomical Record.

Dingoes, and the closely related New Guinea singing dogs, look like the default definition of dog, but they are not dogs.

“There is a basic doggy look to dingoes,” said Shipman.

Genetically and behaviorally they differ from dogs and are more like wolves in their inability to digest starches and their relationships with humans.

Most domestic dogs evolved along with humans as humans became agriculturalists and moved to a diet containing large amounts of starch, whether from maize, rice, potatoes or wheat. Their genome changed to allow the digestion of these starches. Dingoes, like wolves, have very few of the genes for starch digestion.

While indigenous Australians stole dingo puppies from their dens and raised them, these puppies generally left human homes at maturity and went off to breed and raise offspring. The ability to closely bond with humans is limited in dingoes, although present in dogs. Native Australians also did not manipulate dingo breeding, which is a hallmark of domestication.

Dingoes are also well-adapted to the Australian outback and fare well in that environment. Domestic dogs that become feral do not survive well in the outback.

“Aboriginal Australians were not well-regarded as holders of knowledge or special skill when Europeans came to the continent,” said Shipman. “So, no one thought to ask them about dingoes. Even recently, asking aboriginals for their scientific or behavioral knowledge really was not common.”

However, aboriginal Australians have a long history of living with dingoes in their lives. Many people argue that dingoes are just dogs — strange dogs, but just dogs, said Shipman. But, according to aboriginals, dingoes are not dogs.

With dingoes showing behaviors somewhere between wolves and dogs and exhibiting only slight genetic ability to consume starchy foods or tolerate captivity, Shipman concluded that “A dingo is a wolf on its way to becoming a dog, that never got there.”