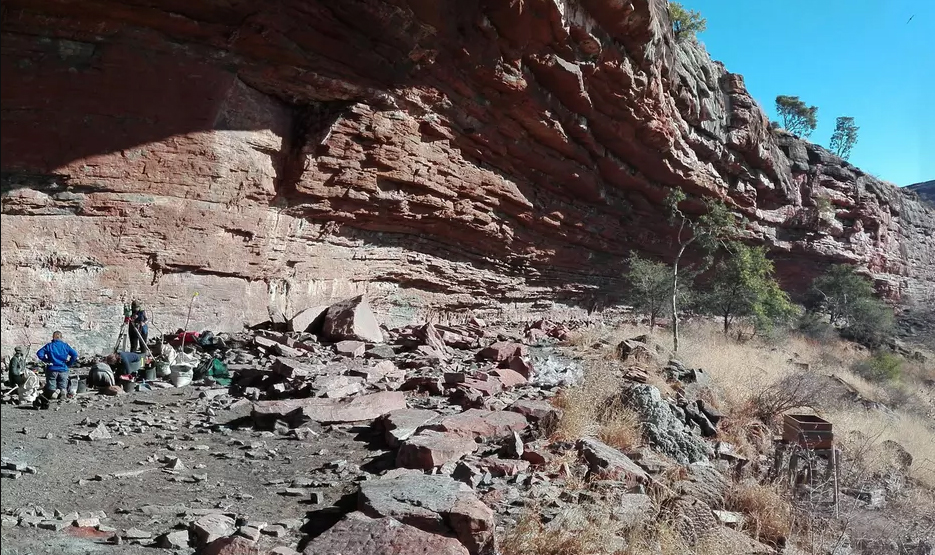 The archaeological finds are more than 100,000 years old

Archaeological evidence in a rockshelter at the edge of the Kalahari Desert, South Africa, is challenging the idea that the origins of our species were linked to coastal environments.

“Our findings from this rockshelter show that overly simplified models for the origins of our species are no longer acceptable. Evidence suggests many regions across the African continent were involved, the Kalahari being just one,” Dr. Jayne Wilkins from Griffith University in Australia said.

“Archaeological evidence for early Homo sapiens has been largely discovered at coastal sites in South Africa, supporting the idea that our origins were linked to coastal environments. There have been very few well-preserved, datable archaeological sites in the interior of southern Africa that can tell us about Homo sapiens’ origins away from the coast.

“A rockshelter on Ga-Mohana Hill that stands above an expansive savannah in the Kalahari is one such site.”

The researchers excavated 22 white calcite crystals and fragments of ostrich eggshell, thought be used as water containers, from deposits dated to 105,000 years ago at Ga-Mohana Hill North Rockshelter when the environment was much wetter than today. The researchers were delighted to discover that the assemblage of human-collected crystals and ostrich eggshell fragments at Ga-Mohana Hill were significantly older than that reported in interior environments elsewhere.

“Our analysis indicates that the crystals were not introduced into the deposits via natural processes, but were deliberately collected objects likely linked to spiritual beliefs and ritual,” Dr Wilkins said.

“The crystals point towards spiritual or cultural use of the shelter 105,000 years ago,” said Dr Sechaba Maape from the University of the Witwatersrand. “This is remarkable considering that site continues to be used to practice ritual activities today.”

The age of the archaeological layers was constrained via Optically Stimulated Luminescence (OSL) dating in the OSL laboratory at the Department of Geology at the University Innsbruck, Austria.

“This technique measures natural light signals that accumulate over time in sedimentary quartz and feldspar grains,” said Dr Michael Meyer, head of the OSL Laboratory. “You can think about each grain as a miniaturised clock, from which we can read out this natural light or luminescence signal, giving us the age of the archaeological sediment layers.”

The name Kalahari is derived from the Tswana word Kgala, meaning ‘great thirst’. And today the climate at Ga-Mohana is semi-arid, with little, very seasonal rainfall. However, ancient proof of abundant water on the landscape is evident from the abundant tufa formations around the shelter. These were aged using the uranium-thorium dating method to between 110,000 and 100,000 years ago – exactly the same time period as the people were living there.

“This is a story of water in what we know now as a dry landscape, and of adaptable people who exploited the landscape to not only survive but to thrive,” says Dr Robyn Pickering, who is director of the Human Evolution Research Institute (HERI) at the University of Cape Town.

Due to the ongoing spiritual significance of Ga-Mohana Hill, the researchers are conscious to minimise their impact on the local communities’ use of the rockshelter after each season.

“Leaving no visible trace and working with the local community is critical for the sustainability of the project,” Dr Wilkins said. “So that Ga-Mohana Hill can continue to provide new insights about the origins and evolution of Homo sapiens in the Kalahari.”