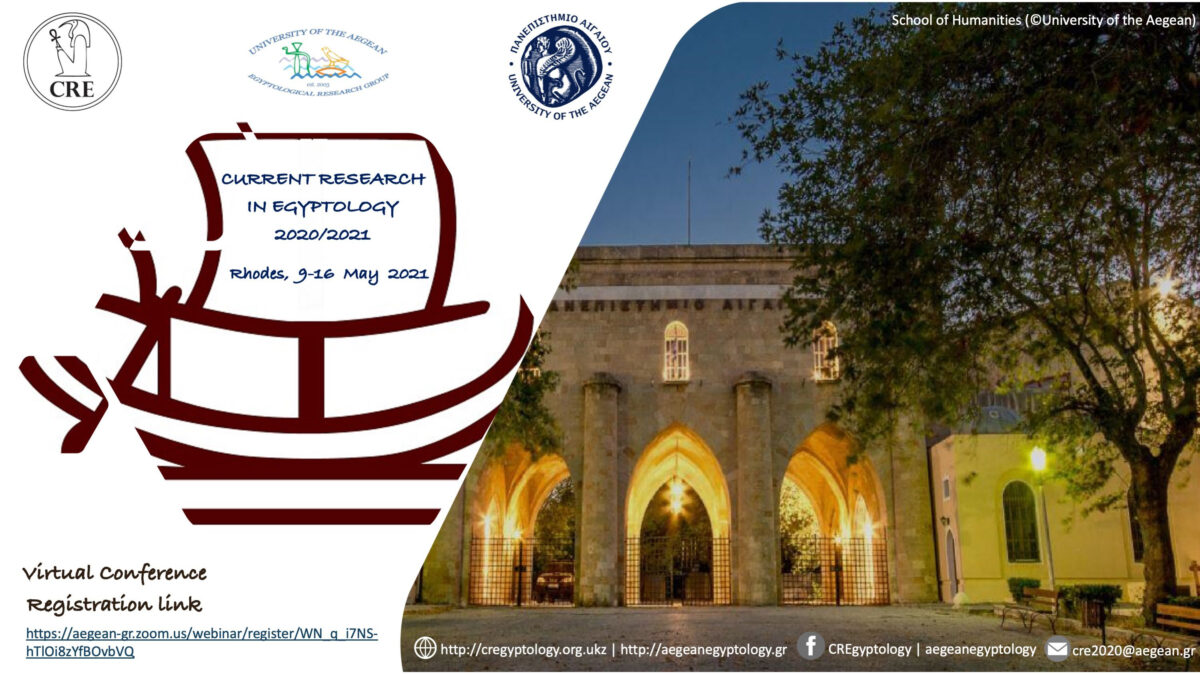 Conference running online from May 9 to May 16

by Archaeology Newsroom
The University of the Aegean Egyptological Research Group/ Aegean Egyptology of the Department of Mediterranean Studies of the University of the Aegean in cooperation with the Laboratory for the Ancient World of the Eastern Mediterranean and the Postgraduate Programme Archaeology of the Eastern Mediterranean from the Prehistoric Era to Late Antiquity: Greece, Egypt, Near East of the same Institution organizes the virtual international conference Current Research in Egyptology 2020/2021 (CRE 2020/2021) from 9 to 16 May 2021. In the following days, everyone with an interest in ancient Egypt will have the opportunity to attend more than 100 oral or poster presentations by scholars from almost 70 universities, institutes, museums, archaeological missions, and organizations as well as independent scholars across the world, which makes this conference a truly international meeting in spirit. Attendees will have the chance to get updates and new insights on the results of ongoing research on different topics of Egyptology and related fields, share knowledge and have discussions on politics; society and economy; religion magic and medicine; architecture; art, and iconography; human and nature; material culture and interconnections. Experts from across Egyptology and related fields will be sharing their expertise in their keynote lectures: Prof. Joachim Friedrich Quack, Prof. Diamantis Panagiotopoulos, Prof. Panagiota Sarischouli, Asst. Prof. Myrto Malouta, Prof. Panagiotis Pachis, Prof. Panagiotis Kousoulis, Dr. Virginia Webb and Prof. Olaf Kaper. The Conference is free to attend via zoom: https://aegean-gr.zoom.us/webinar/register/WN_q_i7NS-hTlOi8zYfBOvbVQ

Current Research in Egyptology; about

The CRE 2020/2021 conference is organized by  Aegean Egyptology (AE), the official Egyptological Research Group of the Department of Mediterranean Studies of the University of the Aegean. It was back in 2002 and the bright vision of the members of the DMS Temporary Academic Committee, predominantly among them Prof. Ioannis Seimenis (Head of DMS, 2001-2003) and Prof. Socrates Katsikas (Vice-Rector of the University of the Aegean, 2000-2003), that inaugurated Egyptology as an academic discipline in Greek academia. In 2003, Dr. Panagiotis Kousoulis was elected as Lecturer in Egyptology and established the credentials for the formation and development of AE on Rhodes. Since then, AE has been rapidly expanded with an active team of researchers, research collaborations with Greek and foreign Universities and Institutions. AE aims at the promotion of Egyptology in Greece through the elaboration and implementation of pioneered international and interdisciplinary research projects, the organization of international scientific colloquia, conferences and specialized seminars and workshops (predominantly among them the first specialised Egyptological symposium Ancient Egyptian Theology and Demonology, Studies on the Boundaries between the Demonic and the Divine in Egyptian Magic in 2003 and the prestigious Tenth International Congress of Egyptologists in 2008), the development of specialized Egyptological courses in undergraduate and postgraduate levels, e-learning programmes and summer schools. More recently, AE is implemented by the first Postgraduate Programme (Master of Arts) in Eastern Mediterranean Archaeology in Greek academia, entitled Archaeology of the Eastern Mediterranean from the Prehistoric Era to Late Antiquity: Greece, Egypt, Near East (2014 onwards), and the Laboratory for the Ancient World of the Eastern Mediterranean (2015 onwards). Doctoral and postdoctoral research in Egyptology and related fields was inaugurated in 2006 and it is characterized by an exceptionally high standard of originality and focus on a variety of often unexplored fields in Egyptology, archaeology, and the ancient world of the eastern Mediterranean. Three doctorate titles were awarded so far to Pavlos Antonatos (2012), Electra Apostola (2015), and Grigorios Kontopoulos (2020). Current doctorate candidates include Dimitrios Garoufalis, Dimitrios Georgiou, Anna Kalaitzaki, Maria Katsigianni, Christos Kekes and Manos Lambrakis. Postdoctoral research is carried out by Dr. Pavlos Antonatos, Dr. Electra Apostola, and Dr. Christina Papadaki. Aegean Egyptology Team has recently added two new members, Eirini Skaroglou (postgraduate student at the DMS) and  Katerina Sofianou (graduate of the DMS, MA Egyptology of Leiden). ‘We are sure that all conference participants in this year’s CRE will benefit greatly and gain new insights from their expertise on various debate issues, especially on ancient Egyptian interconnections as well as language and texts. On behalf of the CRE 2020/2021 Organizing Committee, Electra Apostola, Postdoctoral researcher (Egyptology) Anna Kalaitzaki, PhD Candidate (Egyptology) Christos Kekes, PhD Candidate (Egyptology) CRE 2020/2021 Scientific Coordinator: Panagiotis Kousoulis, Professor of Egyptology Director of Studies, MA Programme “Archaeology of the Eastern Mediterranean from the Prehistoric Era to Late Antiquity: Greece, Egypt, Near East” Director, Laboratory for the Ancient World of the Eastern Mediterranean