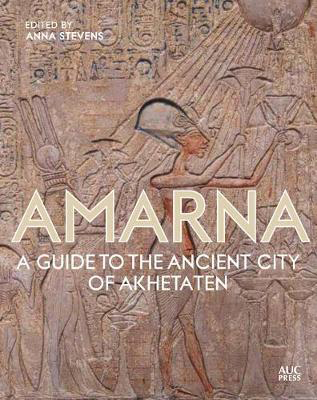 Amarna: A Guide To The Ancient City Of Akhetaten

By Anna Stevens (assistant director of the Amarna Project)

by Archaeology Newsroom
Anna Stevens, Amarna: A Guide to The Ancient City of Akhetaten, AUC Press, Cairo 2021, 200 pp., 149 illus, 7 maps, 19×24 cm, ISBN: 9789774169823. Around three thousand years ago, the pharaoh Akhenaten turned his back on Amun and most of the great gods of Egypt. Abandoning Thebes, he quickly built a grand new city in Middle Egypt, Akhetaten—Horizon of the Aten—devoted exclusively to the sun god Aten. Huge open-air temples served the cult of Aten, while palaces were decorated with painted pavements and inlaid wall reliefs. Akhenaten created a new royal burial ground deep in a desert valley, and his officials built elaborate tombs decorated with scenes of the king and his city. As thousands of people moved to Akhetaten, it became the most important city in Egypt. But it was not to last. Akhenaten’s death brought the abandonment of his city and an end to one of the most startling episodes in Egyptian history. Today, Akhetaten is known as Amarna, a sprawling archaeological site in the province of Minya, halfway between Cairo and Luxor. With its beautifully decorated tombs and vast mud-brick ruins, it is the best-preserved pharaonic city in Egypt. This informed and richly illustrated guidebook brings the ancient city of Akhetaten alive with a keen insider’s eye, drawing on ongoing archaeological research and the knowledge and insight of Amarna’s modern-day communities and caretakers to explain key monuments and events while offering invaluable practical advice for visiting the site. With over 150 illustrations, maps, and plans, Amarna is both an ideal introduction for visitors to Amarna and a window onto the extraordinary reign of Akhenaten.