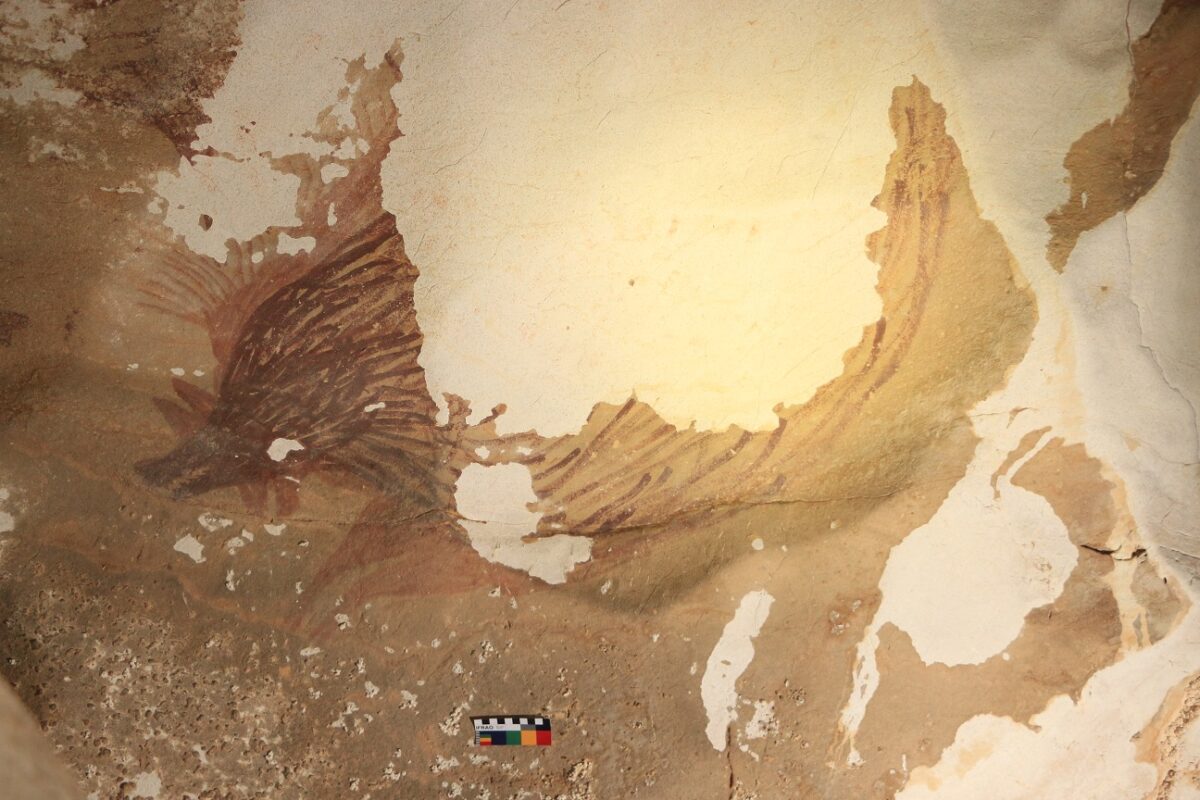 Cave paintings dated to at least 44,000 years ago

Griffith University-led research has revealed that some of the world’s earliest known rock art is disappearing at an alarming rate. This includes cave paintings dated to at least 44,000 years ago that are believed to be the oldest surviving artistic depictions of hunting scenes and supernatural beings.

In a study published in Scientific Reports, a team of Australian and Indonesian archaeological scientists, conservation specialists and heritage managers documented the mechanisms behind increasing loss of painted limestone cave surfaces in southern Sulawesi, Indonesia.

Their findings indicate that deterioration of these globally significant artworks is accelerating in step with climate change.

Study lead, Dr Jillian Huntley from the Griffith Centre for Social and Cultural Research, specialises in rock art conservation. Her research scientifically describes the properties of rock art and the caves or rock shelter environments where it survives today.

Dr Huntley said she was shocked by the extent of salt weathering on the painted limestone cave surfaces in Sulawesi.

“I was gobsmacked by how prevalent the destructive salt crystals and their chemistry were on the rock art panels, some of which we know to be more than 40,000 years old,” she said.

Unlike the temperate climates where famous European ice age cave art sites such as Altamira and Lascaux are found, the ancient Indonesian paintings are located in the tropics, the most atmospherically dynamic region on the planet. The mid-latitudes act as the heat engine for global climate cycles, and global warming can be up to three times higher in the tropics as a result.

“Our analyses show that haloclasty is not only chemically weakening the cave surfaces, the growth of salt crystals behind ancient rock art is causing it to flake off the walls – it is disappearing before our eyes,” she said.

“In my opinion, degradation of this incredible rock art is set to worsen the higher global temperatures climb.”

ARKENAS director I. Made Geria said: “The rock art of Maros-Pangkep provides crucial insight into the world of ancient Indonesia. Preserving this art for future generations requires the cooperation and long-term commitment of scientific research institutions, cultural heritage agencies, government authorities, and local communities. It also requires us to educate people in Indonesia – and throughout the world – about the urgent need to study and safeguard this irreplaceable evidence of past human civilization.”

“We have recorded over 300 cave art sites in Maros-Pangkep. Our teams continue to survey the area, finding new artworks every year. Almost without exception the paintings are exfoliating and in advanced stages of decay. We are in a race against time,” he said.

Rustan Lebe, a BPCB archaeologist based in Maros-Pangkep, coordinates an emerging program of rock art and microclimate monitoring in the region. According to Rustan “we have recorded rapid loss of hand-sized spall flakes from these ancient art panels over a single season (less than five months)”.

“Apart from studying how the salts are forming on the cave walls, it is important to consider the analysis of rock art pigment composition and image production techniques, which could possibly provide insight into why some individual motifs exfoliate more quickly than others.”

“Cave art discoveries are revealing more and more about how advanced the cultural lives of the first peoples living in Sulawesi were. Detailed paintings of animals, hand stencils and narrative scenes of great antiquity show that people have been connected to this place for tens of thousands of years,” he said.

Aside from the direct impacts associated with industrial development such as mining, altered climate states resulting from global warming are the biggest threat to the preservation of the ice age art of the tropics.

“The challenges of climate change adaptation for the Indonesian Maritime Continent are complex,” Dr Huntley said.

“Understanding the mechanisms of rock art weathering is even more critical in this context. Some of the solutions of looming food insecurity such as the expansion of rice fields and aquaculture ponds can have unintended consequences. Holding surface water in these ways enhances humidity, prolonging the seasonal shrink and swell of geological salts, as well as leading to more mineral deposition. All of which leads to rock art degradation.”

“We urgently need further rock art and conservation research to have the best chance of preserving the Pleistocene cave paintings of Indonesia.”