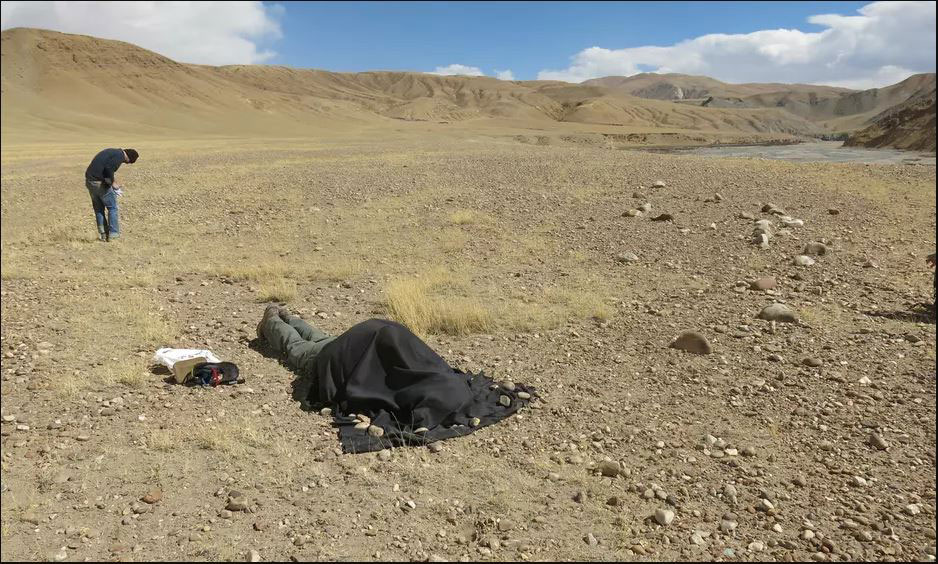 For the first time, Michael Meyer and Luke Gliganic from the Department of Geology at the University of Innsbruck have used a new optical dating technique to directly constrain the age of prehistoric stone artefacts from an archaeological site southern Tibet. The findings are more than 5,000 years old and thus the oldest evidence of human presence in this part of the Tibetan Plateau.

Stone tools have been made by humans and their ancestors for millions of years. For archaeologists these rocky remnants — lithic artefacts and flakes — are of key importance. Because of their high preservation potential they are among the most common findings in archaeological excavations. Worldwide, numerical dating of these lithic artefacts, especially when they occur as surface findings, remains a major challenge. Usually, stone tools cannot be dated directly, but only when they are embedded in sediment layers together with, for example, organic material. The age of such organic material can be constrained via the radiocarbon technique. If such datable organic remains are missing or if stone artefacts lack a stratified sedimentary context, but rather occur as scattered surface artefacts, numerical dating becomes very difficult or is simply impossible. “The earth’s surface is highly dynamic and erosion and redeposition of material, especially over long timescales, is common. A precise age determination of lithic artefacts that occur as surface finds has therefore hardly been possible so far. Many aspects of ancient human behaviour have only been preserved as surface finds, hence cannot be dated precisely with currently available dating methods. By further developing the Optically Stimulated Luminescence (OSL) dating technique, we can now, for the first time, carry out precise, and direct age measurements on lithic artefacts. In our current study we used stone artefacts from an archaeological surface site in south-central Tibet”, explains Michael Meyer, head of the Luminescence Laboratory at the Department of Geology at the University of Innsbruck and one of the main authors of the study now published in the renowned journal Science Advances. OSL dating is based on the measurement of light stored in natural minerals and is one of the most important absolute dating tools in archaeology and the earth sciences. “This dating method uses natural light signals that accumulate over time in natural dosimeters, such as quartz and feldspar grains that are important constituents of sediments, as well as rocks and lithic artefacts. These minerals can be imagined as miniaturized clocks. Each grain is a tiny clock that can be ‘read-out’ under controlled laboratory conditions. The light signal allows us to infer the age of the archaeological sediment layer or artefact. The more light, the older the sample,” says the geologist. “In this study, we have now taken a new approach and focused not on sediment grains of sand, but — for the first time — on stone artefacts themselves.”

Quarrying activities more than 5,000 years ago

Due to its extreme environmental and climatic conditions the dry highlands of Tibet are considered to be one of the last regions on earth that were occupied by humans. When exactly peopling of this remote and rather extreme environments occurred has caused a lot of scientific debate over the course of the last decade. In 2017, Michael Meyer dated the famous human foot and hand prints of Chusang in the central part of the Tibetan plateau to an age between 8,000 and 12,000 years. In the current study, Meyer and his team analysed archaeological finds from southern Tibet in the Innsbruck OSL Laboratory: The excavation site Su-re is located immediately north of the Mount Everest-Cho Oyu massif in the so-called Tingri graben at an elevation of 4450 metres. Surface artefacts are particularly common in Tibet. To date them, the researcher used the so-called “Rock Surface Burial Dating” technique and applied it to lithic surface artefacts. This method determines the point in time when the stone artefact was discarded by humans and at least partly covered by earth. “With our luminescence method, we can look inside the stone and create a continuous age-depth profile. The inside of a rock has never been exposed to sunlight, so we have a saturated luminescence signal there and an infinite high age. However, if the rock surface is exposed to daylight for a long enough time, the signal in the top millimeters or centimeters of the rock will be erased. This happens during knapping, when the stone tool is produced, and also during the subsequent artefact use by humans. When the artefact is then discarded and at least partially buried in sediment and shielded from light, the luminescence signal in this artefact surface recharges. By measuring this depth-dependent luminescence signal in the rock surfaces, we can calculate the age of the artefact discard, taking into account the dynamics of local earth surface processes. Such an approach allows us to date stone artefacts directly, even if they occur as surface finds,” Meyer explains. The analyses on the surface artefacts from southern Tibet revealed an age between 5,200 and 5,500 years. “We assume that the artefact findings at Su-re are related to quarrying activities at this site”. Very old sites have been discovered in the central part of the Plateau, however, for southern sector of the Tibetan Plateau, Su-re is currently to oldest securely dated site.

For Michael Meyer, the analysis of these Tibetan artefacts is just the beginning: “This OSL-based method opens up new vistas in archaeological dating and holds great potential also for sites on other continents that preserve lithic artefacts in a favorable setting,” concludes the geologist.