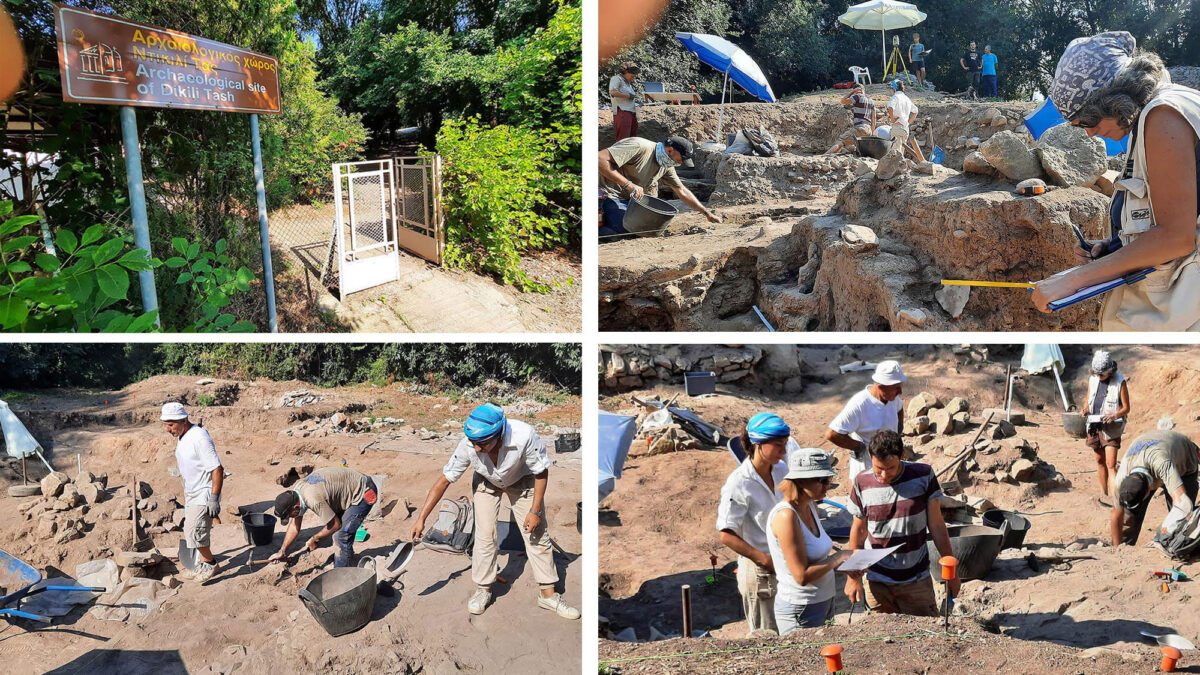 The 2020 Grand Archaeology Award to the Dikili Tash Team

The Grand Archaeology Prize of the Simone and Cino Del Duca Foundation was awarded by the French Institute to the Archaeological Research Team at Dikili Tash, in the region of Philippi, the Municipality of Kavala. It is the second year that the excavation team has been nominated, but this time the members of the French Académie des Inscriptions et Belles-Lettres recognized both the importance of the excavations, already a century old, conducted in the prehistoric settlement of Dikili Tash and the quality of the team’s scientific research.

Archaeologist Dimitria Malamidou, head of the Serres Ephorate of Antiquities and member of the Archaeological Society at Athens, has been leading the excavation programme since 2008 with Honorary Curator of Antiquities and also member of the Archaeological Society at Athens, Chaido Koukouli-Chryssanthaki. Speaking to the Athens and Macedonian News Agency (AMNA) , Ms. Malamidou expressed her joy and satisfaction for the award saying that the copious work of the entire excavation team has been recognized. On the French side, the current (2019-2023) excavation programme is being led by Pascal Darcque and Zoe Tsirtsoni, research director and researcher respectively at the French National Research Foundation (CNRS).

The Greek-French team of Dikili Tash returned to the excavation field this summer, after a break in 2020 due to the pandemic.

As Ms. Malamidou explains, excavations at Dikili Tash began at the same time as excavations at the archaeological site of Philippi, since the scientific and archaeological community had already been aware of this settlement’s importance. Today, 100 years later, archaeologists have collected important data on the way of life and organization of the prehistoric community. Large finds, easily recognizable to the general public, may not have yet been found but numerous remains from a long series of successive layers have been located, dating from the beginning of the Late Neolithic period (5500 B.C.) to the end of the Late Bronze Age (1100 BC).

It was particularly interesting to recently identify the first settlement at the site, dating to around 6400-6200 BC, i.e. almost the same period as the first permanent settlements in northwestern Anatolia and in the “pioneering” sites of the Aegean world, as well as the indisputable evidence of wine production from grapes; to date the oldest case of wine making on European soil (circa 4300/4200 BC).

It was also proved that the Late Bronze Age on the top layer of the mound had a long duration (from at least 1600/1450 to 1300/1150 BC), while the finding of pottery decorated in the Mycenean style allows for the exploration of contacts made by the site and its greater area with southern Greece.

The prehistoric settlement does however still have many and great secrets to reveal. As Dimitria Malamidou aptly points out, speaking to the AMNA, “there are questions about the location of this settlement’s cemetery which we are looking for and which will provide us with important information about the functioning of the community of prehistoric people, regarding death. There are also questions about what the Early Bronze Age buildings were like, for which excavations are also continuing.”

For those who do not know…

The prehistoric settlement of Dikili Tash is located in the southeastern part of the plain of Drama, at a distance of 2 km from the ancient city of Philippi, on the outskirts of the present town of Krinides. This was the seat of the former municipality of Philippi and since 2010 has been integrated into the single municipality of Kavala.

The settlement is in the form of a mound, one of the largest in the Balkans, with a perimeter of 4 and a height of 17 meters. The site has been systematically excavated, under the auspices and financial support of the Archaeological Society at Athens and the French School at Athens. Since 2008 the excavation programme has received additional support from the excavation committee of the French Ministry of Foreign Affairs and from the US-based Institute of Aegean Prehistory (INSTAP). The Kavala Ephorate of Antiquities and the local government are constantly helping in the mission’s work.

The settlement can be visited by the public, but after communicating with the Kavala-Thassos Ephorate of Antiquities, during the days and hours of excavation work.