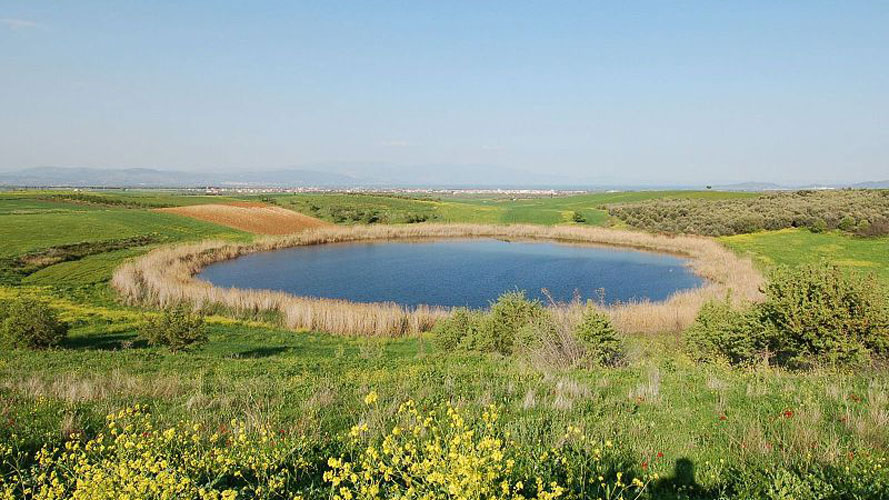 The Zerelia Lakes: Their name is unknown to many, since few people apart from the locals are aware of their existence. Although they are situated outside the usual tourist destinations they are nevertheless two lakes that are unique in Greece for their texture and the way they were created and one of the few of their kind in Europe.

The Zerelia Lakes are situated in Magnesia, very close to Almyros and at the foot of the Othrios mountain, at an altitude of just 130 meters above sea level.

What characterizes the two small lakes, perfectly round with a geometric accuracy, is their meteoric origin, since they are Maar lakes, the only ones existing in Greece.

Both lakes are easily accessible from Almyros, as they are located just 4 km southwest and are about 250 meters apart. The largest of the two lakes, the Great Zerelia, has a 250 meters diameter and is around 8 meters deep, while the Small Zerelia has a diameter of 150 meters and a depth of about 6 meters, the bottom of both lakes being plate shaped.

According to the researchers, these are two craters created by a meteorite collision with Earth estimated to have occurred during the Holocene period, ie 12,000 to 8,000 years ago, and the probable size of the remnants that collided with Earth is thought to range from between 10 to 30 meters.

The scientific community reports that the two round Zerelia lakes are a unique phenomenon in Greece while in the whole of Europe there are no more than 40, with just 178 globally.

The area around Zerelia is also of archaeological interest since a stone’s throw away is a small hill on which a prehistoric settlement was found, thought to have been inhabited up to the Bronze Age. The hill or mound, located at a distance of 200 meters from the lake shores, was explored by an archaeological team of the Dutch Archaeological School and fragments of Bronze Age pottery were discovered in a surface excavation of the terrain.

Archaeologist Dimitris Theocharis, who conducted excavations in the region, claims that the temple of Athena Itonia is in one of the two lakes and appears only when the water level of the lake is low, a fact disputed by the head of excavations of the Dutch Archaeological School.

The lakes are however not just of archaeological and geological interest, their waters are also a hospitable environment for many bird species, such as white storks, green-headed ducks and the abundant waterhens in the area.