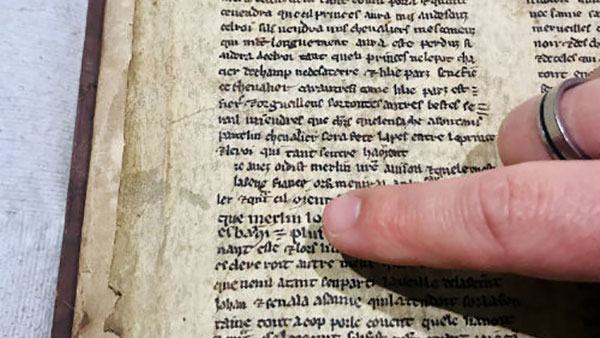 Among the oldest of their kind

Medieval manuscript fragments discovered in Bristol that tell part of the story of Merlin the magician, one of the most famous characters from Arthurian legend, have been identified by academics from the Universities of Bristol and Durham as some of the earliest surviving examples of that section of the narrative.

The analysis also uncovered how the hand-written documents ended up in Bristol, differences in the text from previous versions of the story and by using multi-spectral imaging technology, the researchers were able to read damaged sections of the text unseen by the naked eye and could even identify the type of ink that was used.

The seven parchment fragments were spotted by chance in early 2019 by Michael Richardson from the University of Bristol’s Special Collections Library. They were pasted into the bindings of four early-modern volumes, published between 1494-1502 and held in Bristol Central Library’s rare books collection.

The fragments contain a passage from the Old French sequence of texts known as the Vulgate Cycle or Lancelot-Grail Cycle, which dates to the early 13th century. Parts of this Cycle may have been used by Sir Thomas Malory (1415-1471) as a source for his Le Morte Darthur (first printed in 1485 by William Caxton) which is itself the main source text for many modern retellings of the Arthurian legend in English.

The find attracted significant media attention, with the Bristol Merlin, as it quickly became known, making headlines across the world.

After the discovery Professor Leah Tether, President of the International Arthurian Society (British Branch) from Bristol’s Department of English, her husband, medieval historian and manuscript specialist Dr Benjamin Pohl from the University’s Department of History and Dr Laura Chuhan Campbell, a specialist in the Old French Merlin stories from Durham University, set out to examine and analyse the fragments in detail to discover more about them.

Their collaborative research and findings, which include a full transcription and translation into English of the text, have been brought together in a new book called The Bristol Merlin: Revealing the Secrets of a Medieval Fragment, recently published by ARC Humanities Press with full-page colour images of the fragments captured by award-winning Bristol-based photographer, Don Hooper.

Professor Tether said: “We were able to date the manuscript from which the fragments were taken to 1250-1275 through a palaeographic (handwriting) analysis, and located it to northern, possibly north-eastern, France through a linguistic study.

“The text itself (the Suite Vulgate du Merlin) was written in about 1220-1225, so this puts the Bristol manuscript within a generation of the narrative’s original authorship.

“We were also able to place the manuscript in England as early as 1300-1350 thanks to an annotation in a margin – again, we were able to date the handwriting, and identify it as an English hand.

“Working with Professor Andy Beeby of Durham University’s Department of Chemistry was also a game changer for our project thanks to the mobile Raman spectrometer developed by him and his team, Team Pigment, especially for manuscript study. We captured images of damaged sections and, through digital processing, could read some parts of the text more clearly.

“This process also helped us to establish, since the text appeared dark under infra-red light, that the two scribes had in fact used a carbon-based ink – made from soot and called ‘lampblack’ – rather than the more common ‘iron-gall ink’, made from gallnuts, which would appear light under infra-red illumination. The reason for the scribes’ ink choice may have to do with what particular ink-making materials were available near their workshop.”

In addition to uncovering detail on the age of the manuscript, the team was also able to piece together how the fragments ended up in the books and how the books themselves found their way to Bristol.

Based on the bindings of the books in which the fragments are now bound as pastedowns (a four-volume copy of the works of the French philosopher Jean Gerson, printed 1494-1502), the team was able to deduce that the fragments, and the manuscript from which they came, had become ‘waste’ in either Oxford or Cambridge, and were then recycled, for their parchment, rather than their content, as binding materials in the books in which we now find them – this probably happened prior to 1520.

The reason for the manuscript becoming waste is unknown, but may have to do with newer, English versions of the Arthurian legend becoming available in the new medium of print (like Malory’s Le Morte Darthur).

Based on the known provenance of other books in the Bristol collection, the likely route to Bristol for the books was via Tobias Matthew, Archbishop of York (1606-28).

Prior to that role, Matthew had been Dean and Bishop of Durham and collected many books formerly belonging to the monks, a lot of which had bindings from Oxford in particular, because many of the Durham monks studied at Durham College, Oxford (now Trinity College).

Matthew, who was born in Bristol, would later, in 1613, co-found the Bristol Public Library, and he donated a large number of his books to the library’s foundation – some of which arrived posthumously. The books containing the Merlin fragments were very likely among his bequest.

In addition, the team found that the Bristol fragments contain evidence of subtle, but significant, differences from the narrative of the stories found in modern editions.

There were longer, more detailed descriptions of the actions of various characters in certain sections – particularly in relation to battle action. One example of this is where Merlin gives instructions for who will lead each of the four divisions of Arthur’s forces, the characters responsible for each division are different from the better-known version of the narrative.

Sometimes only small details were changed – for example, King Claudas is wounded through the thighs in the version found in modern editions, where in the fragments the nature of the wound is left unsaid, which may lead to different interpretations of the text owing to thigh wounds often being used as metaphors for impotence or castration.

Another example is a slightly toned-down account, compared to other versions, of Merlin’s sexual encounter with the enchantress Viviane, better known to Malory readers as the Lady of the Lake.

The seven leaves themselves represent a continuous sequence of the Vulgate Merlin narrative (though they were bound ‘out of chronological order’) – specifically a passage from the section known as the Suite Vulgate du Merlin (Vulgate Continuation of Merlin).

Events begin with Arthur, Merlin, Gawain and assorted other knights, including King Ban and King Bohors preparing for battle at Trebes against King Claudas and his followers.

Merlin has been strategising the best plan of attack. There follows a long description of the battle. At one point, Arthur’s forces look beleaguered but a speech from Merlin urging them to avoid cowardice leads them to fight again, and Merlin leads the charge using Sir Kay’s special dragon standard that Merlin had gifted to Arthur, which breathes real fire.

In the end, Arthur’s forces are triumphant. Kings Arthur, Ban and Bohors, and the other knights, are accommodated in the Castle of Trebes.

That night Ban and his wife, Queen Elaine, conceive a child. Elaine then has a strange dream about a lion and a leopard, the latter of which seems to prefigure Elaine’s yet-to-be-born son. Ban also has a terrifying dream in which he hears a voice. He wakes up and goes to church.

We are told that during Arthur’s stay in the kingdom of Benoic for the next month, Ban and Bohors are able to continue to fight and defeat Claudas, but after Arthur leaves to look after matters in his own lands, Claudas is once again triumphant.

The narrative then moves to Merlin’s partial explanation of the dreams of Ban and Elaine. Afterwards, Merlin meets Viviane who wishes to know how to put people to sleep (she wishes to do this to her parents). Merlin stays with Viviane for a week, apparently falling in love with her, but resists sleeping with her. Merlin then returns to Benoic to re-join Arthur and his companions.

Professor Tether added: “Besides the exciting conclusions, one thing that undertaking this study, edition, and translation of the Bristol Merlin has revealed is the immeasurable value of interdisciplinary and trans-institutional collaboration, which in our case has forged a holistic, comprehensive model for studying medieval manuscript fragments that we hope will inform and encourage future work in the field.

“It has also shown us the very great potential of local manuscript and rare book collections in Bristol, particularly in the Central Library where there are many more unidentified manuscript fragments awaiting discovery.”