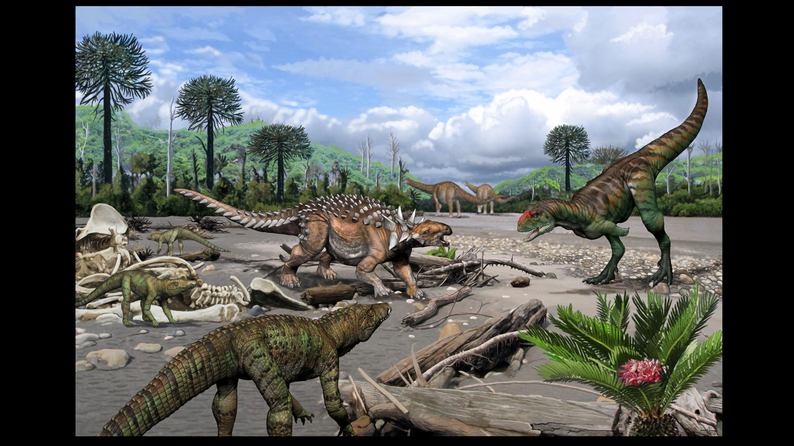 Where skeletons are rare, isolated teeth can flesh out our understanding of ancient reptile-dominated ecosystems, according to a study published September 8, 2021 in the open-access journal PLOS ONE by Ariana Paulina-Carabajal of INIBIOMA (Instituto de Investigaciones en Biodiversidad y Medioambiente) and CONICET (Consejo Nacional de Investigaciones Científicas y Técnicas), Argentina, and colleagues.

South America hosts some of the world’s most important fossil sites for understanding the history of dinosaurs and other Mesozoic reptiles. However, the Late Cretaceous Cerro Fortaleza locality in Santa Cruz, Argentina is surprisingly sparse. Though other nearby sites preserve diverse reptile assemblages, skeletal remains at the Cerro Fortaleza locality are limited almost entirely to one type of dinosaur: the giant sauropod Dreadnoughtus. In this study, researchers expand the known reptile diversity at this site using teeth.

In December 2016, fossil excavations at Cerro Fortaleza recovered 13 teeth and 9 tiny osteoderms (armor-like skin bones) representing a variety of ancient reptiles. Identification of these remains confirmed the presence of at least three types of dinosaurs: carnivorous abelisaurs, armored ankylosaurs, and long-necked titanosaurs. However, most of the teeth were identified as belonging to a group of land-dwelling cousins of crocodiles known as peirosaurs. Though these scant fossils don’t allow precise species to be identified, they indicate a much greater diversity of reptiles at this site than was previously recognized.

These remains include some significant insights into the geographic ranges of certain animals. The presence of ankylosaurs (armored dinosaurs) at this site marks a geographic link between records of these dinosaurs from farther north in Patagonia and from farther south in Antarctica. And the peirosaurs (croc-cousins) at this site represent the southern-most record of this group. This study demonstrates the usefulness of small fossil remains like teeth in fleshing out our understanding of ancient environments and dispersal patterns at fossil sites where skeletal remains are rare.

The authors add: “Sometimes the skeletons do not appear. Thus, the diversity of dinosaurs and crocodiles for this area is revealed by tiny fossils, such as teeth and dermal ossicles. These findings reveal a faunal association that has not been previously found. Particularly the records of ankylosaur dinosaurs and peirosaurid notosuchians are among the most austral so far, for South America.”