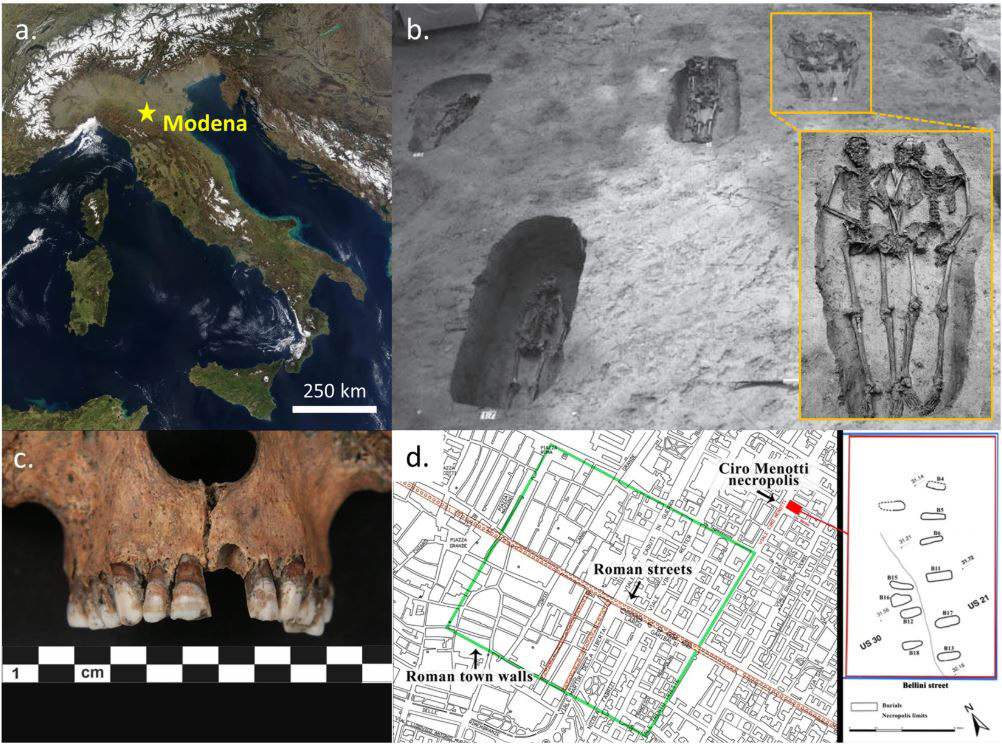 New research on proteins surviving on their enamel

The sex of the ‘Lovers of Modena’ has been classified as male by scientists who detected a particular protein feature on both of them.

The “Lovers of Modena” are two individuals whose skeletons were intentionally buried hand-in-hand, in what is now Modena, Italy, between the 4th and the 6th c. AD.  Upon discovery, back in 2009, mass media had immediately assumed they were a male-female couple. Still, bad preservation of the bones did not allow an effective sex classification.

Recently, however, science has reached new ways in sex classification of ancient skeletons, through the use of proteins surviving on remains. One of these proteins is amelogenin, whose gene is translated into two isoforms linked to sexual chromosomes; AMELX (present in the enamel dental tissue of both sexes) and AMELY (restricted to the male sex only). The isoform AMELY can be easily detected via ion-extracted chromatograms as they record a peptide only present in this particular isoform.

Based on the above, a team of experts affiliated with various scientific institutions in Italy and the US worked on the dimorphic features amelogenin to determine the sex of the ‘Lovers of Modena’. According to a paper published in Nature (11/09/2019), the team was able to extract proteins from the dental enamel of both individuals (~1600 years old) and to confidently classify them as males. Results were compared to 14 modern and archaeological control samples, confirming the reliability of the ion chromatogram method for sex determination.

As it is stated in the paper, “The ‘Lovers of Modena’ have been recognized both as males by the presence of AMELY. The literature lacks of any comparable evidence (namely, hand-in-hand males) in terms of analogous geo-chronological contexts. Furthermore, to our knowledge, such a gesture was uncommon if not totally unrepresented in the art of Late Antiquity or, in general, before modern times”. The article proceeds with references to a large number of ancient burials (Neolithic to Medieval)  containing embraced or hand-in-hand individuals, including the case of Alepotrypa in Greece, Valdaro, Italy and Diyarbakir, Turkey.

“Although we currently have no information on the actual relationship between the ‘Lovers of Modena’ (affective? Kin-based?), the discovery of two adult males intentionally buried hand-in-hand may have profound implications for our understanding of funerary practices in Late Antique Italy” the team concludes.