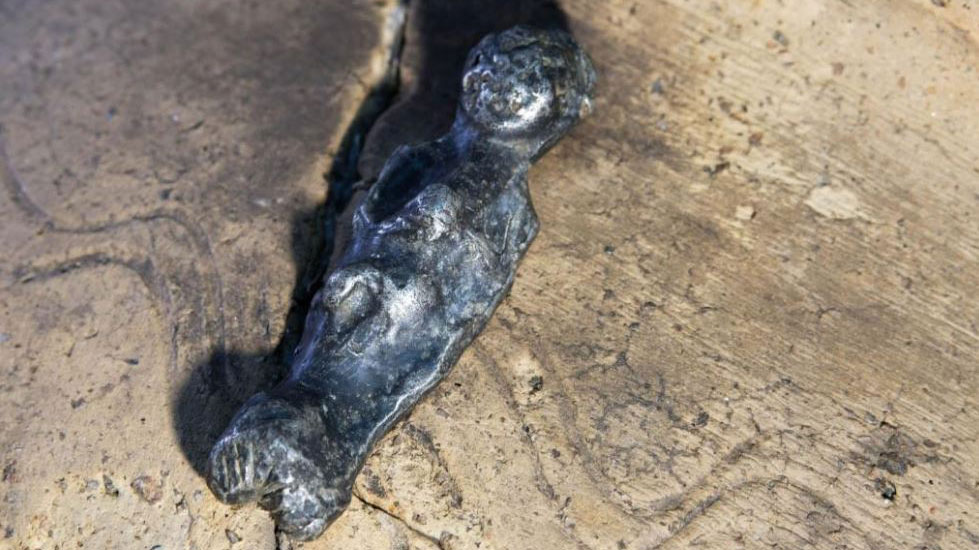 Several hundred medieval fragments of ceramic shells, arrow and javelin heads and a unique silver figurine depicting a man have been discovered by archaeologists during excavations of a fortified settlement in Chodlik (Lublin province).

The Slavic fort in Chodlik existed from the 8th to 10th century. Surrounded by three ramparts, it was one of the largest defensive settlements of the tribal period. There were several villages and barrow cemeteries in its vicinity.

In 2020 and 2021, archaeologists carried out excavations in one of the sites selected during geophysical tests that revealed mysterious rectangular shapes.

Research project leader Dr Łukasz Miechowicz from the Institute of Archaeology and Ethnology PAS said: “We wanted to check if there were residential building within the fort and verify our knowledge about the final phase of its functioning.”

Further research revealed several hundred fragments of clay vessels and militaria (arrow and javelin heads), outfit parts and decorations. Among the latter are a bronze ring clasp and a lunula (a crescent-shaped pendant). The researchers also found a game pawn made of lead.

Miechowicz said: “The most intriguing find is the silver anthropomorphic figure. It measures 5 cm. The figure has entwined hands at the chest height or holds something in them. The presentation of the face is unfortunately unclear, but its toes are clearly marked.”

Discovered at a depth of about 20 cm, archaeologists have so far been unable to determine the purpose of the object. They have not found a similar artefact in publications about other archaeological sites from the period.

The discovered fragments of ceramic vessels come from 8th-10th centuries, which confirms earlier findings of archaeologists concerning the age of the defensive structure. According to Dr. Miechowicz, their large number means that the place was ‘vibrant’. In turn, the militaria were discovered at the base of the outer rampart.

Miechowicz said: “’These artefacts can be traces of armed actions. The Chodel Valley is a very strongly fortified settlement microregion. There are four forts located very close to each other, additional fortifications in the form of a longitudinal rampart, two important trade routes crossed here. It was certainly a rich place of interest to attackers.”

At the base of the shaft, archaeologists also found two early medieval coins. According to experts, they come from the beginning of the 11th century. Until now, researchers believed that the fort ceased to exist in the 10th century.

Miechowicz continued: “During that time, the settlement was believed to have been moved a few kilometres west towards the Vistula, where forts and settlements in Kłodnica and Podgórze certainly functioned in the 11th century. The newly discovered coins justify further research on the chronology of the fort in Chodlik and its possible shift to the 11th century, we are also counting on the results of radiocarbon dating.”

Until now, the fort was believed to have stopped functioning at the time of the formation of the Piast State. The reason for its end remains a puzzle to this day. A natural disaster or an armed invasion could have contributed to this.

After 60 years of research, it is known that Chodlik was a powerful fort, most likely the most important point and centre of settlement in the region. It also belongs to the oldest structures in the area of historical Małopolska. The Chodel Valley was one of the most important early medieval communication ‘nodes’. This was where the long trails crossed, leading from east to the west and from the north to the south – from the Bug basin to Wielkopolska and the Vistula Trail.

The recent work in Chodlik was conducted in cooperation with members of the Historical Society ‘Pasja’.

The current, ongoing scientific project is possible thanks to the existence of a field research station located in the building of a former primary school. Researchers are raising funds (https://zrzutka.pl/chodlik) to renovate the old building and adapt it for museum and science promotion purposes.