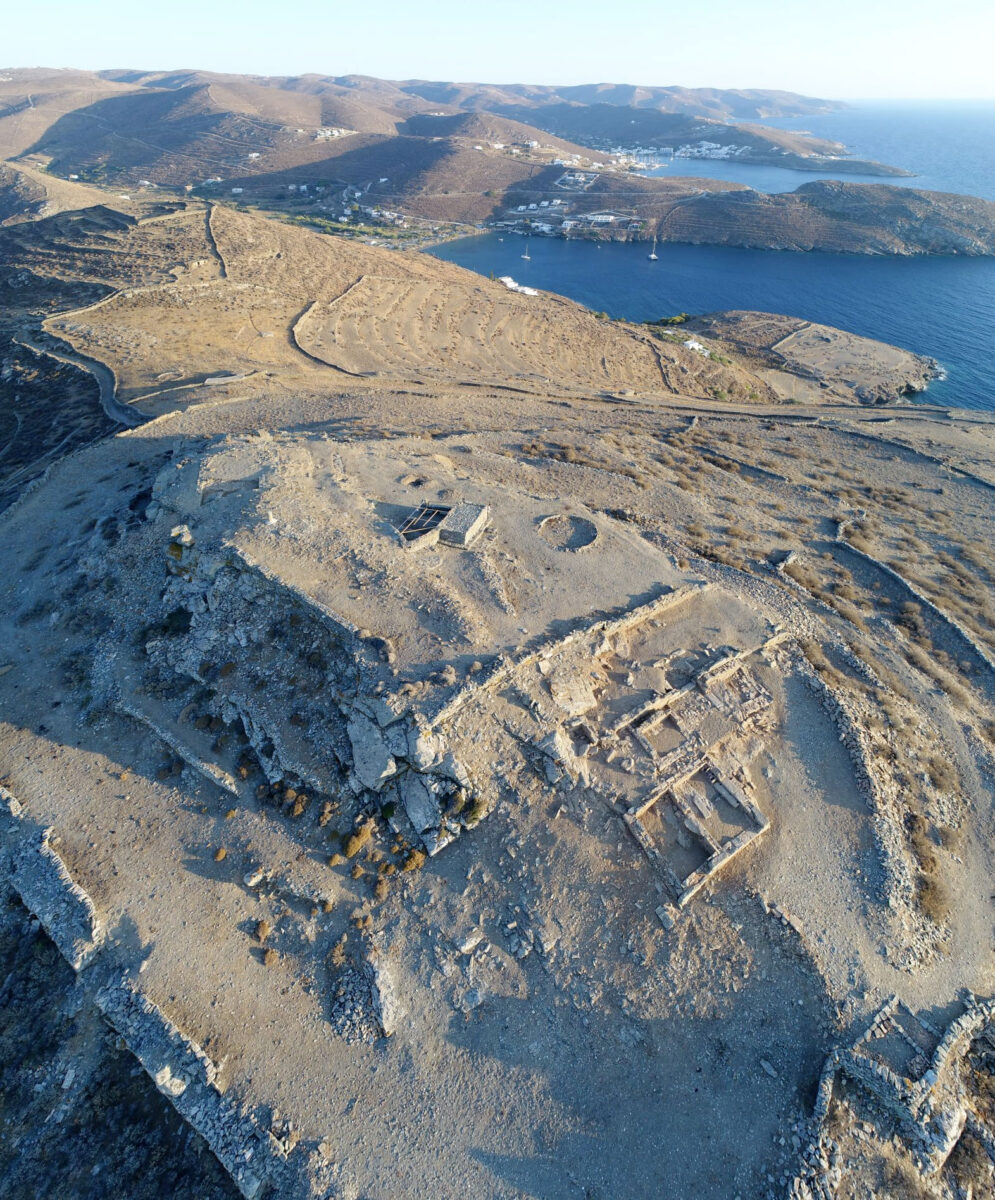 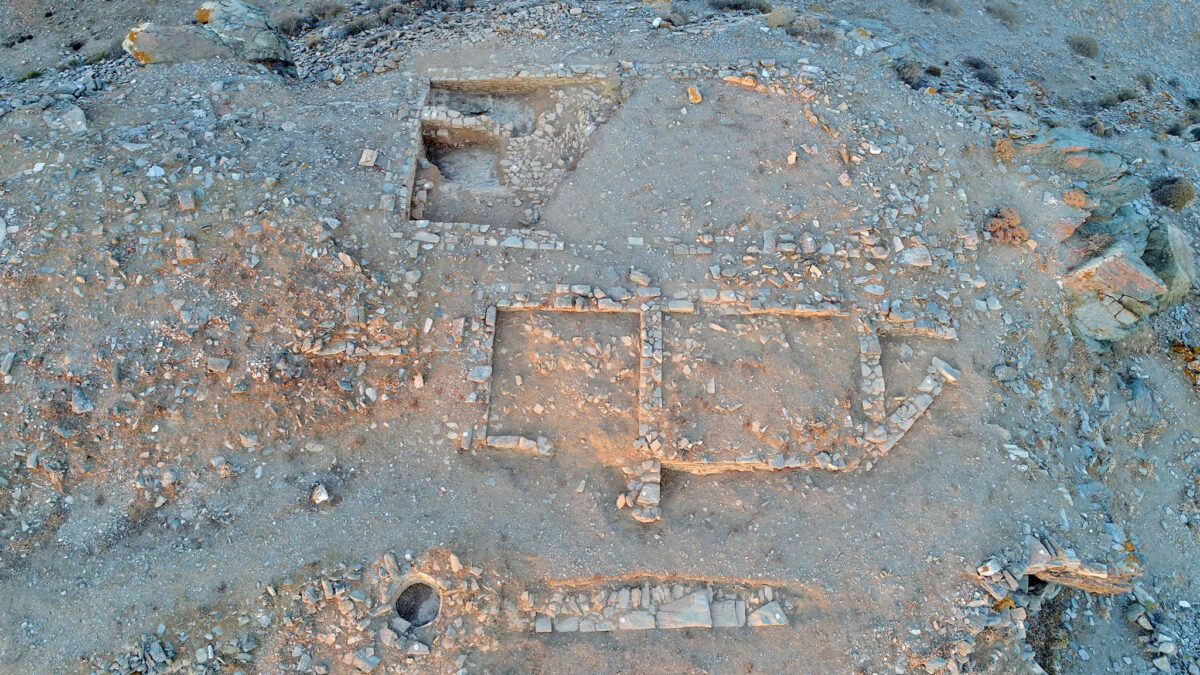 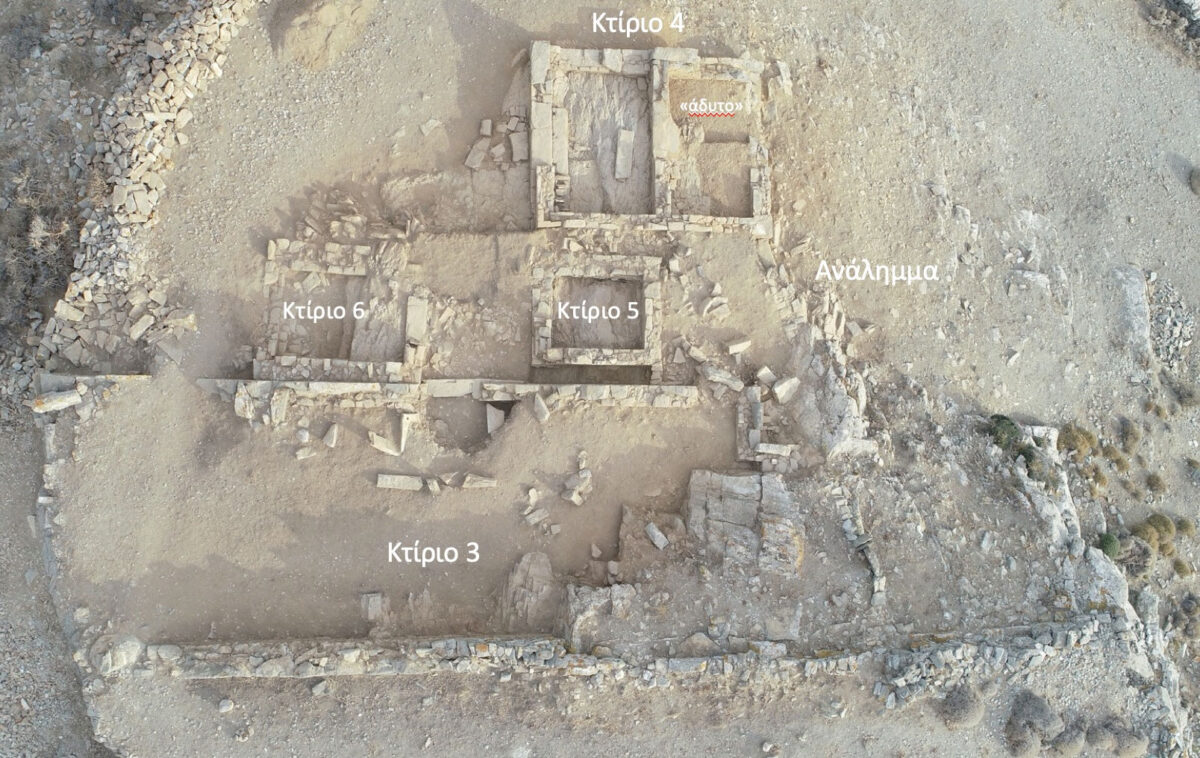 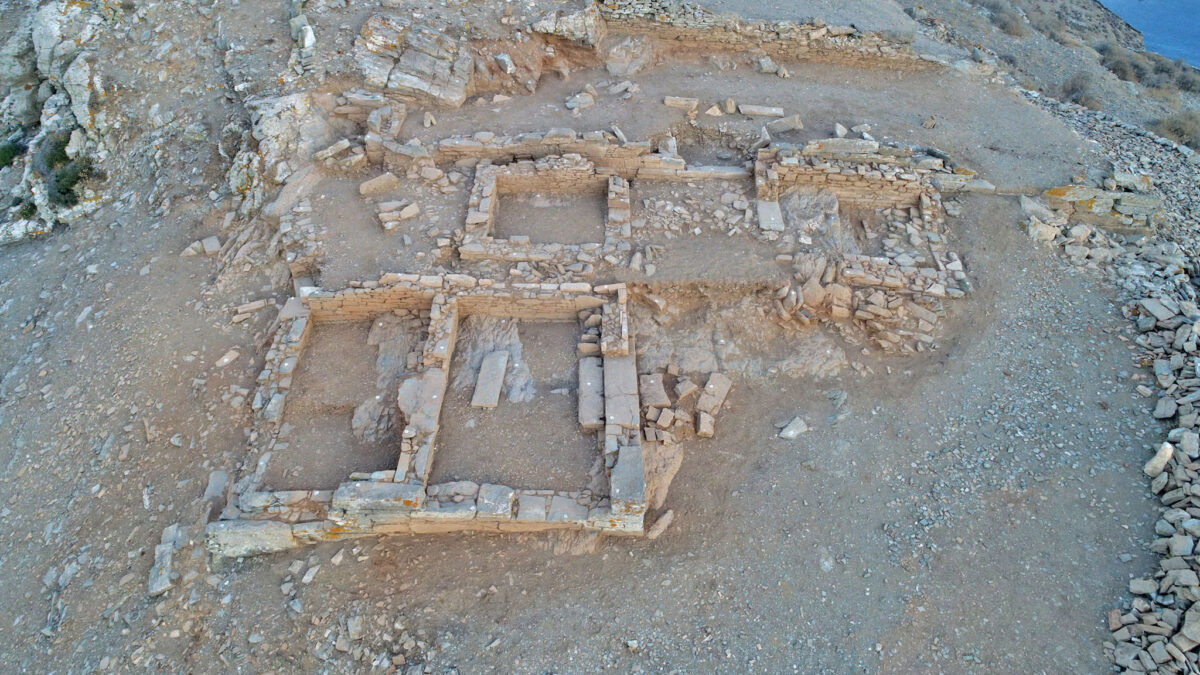 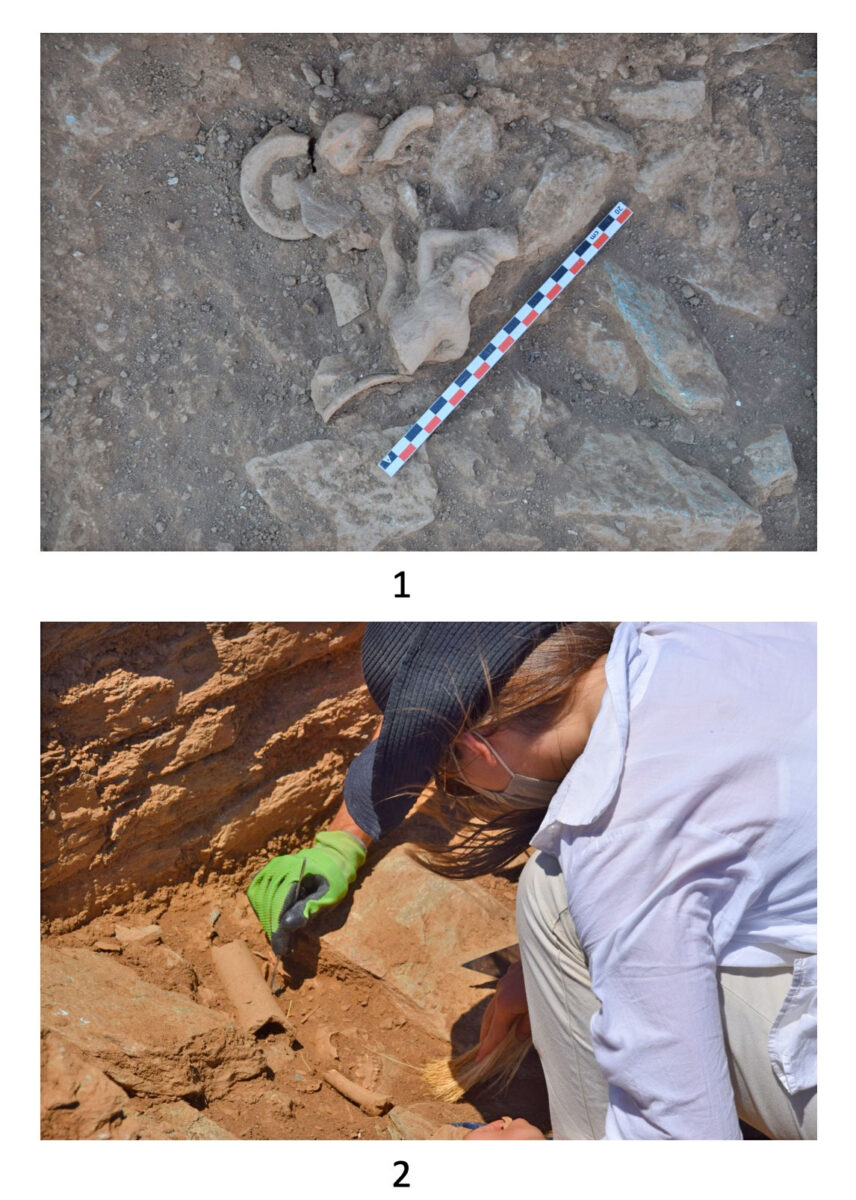 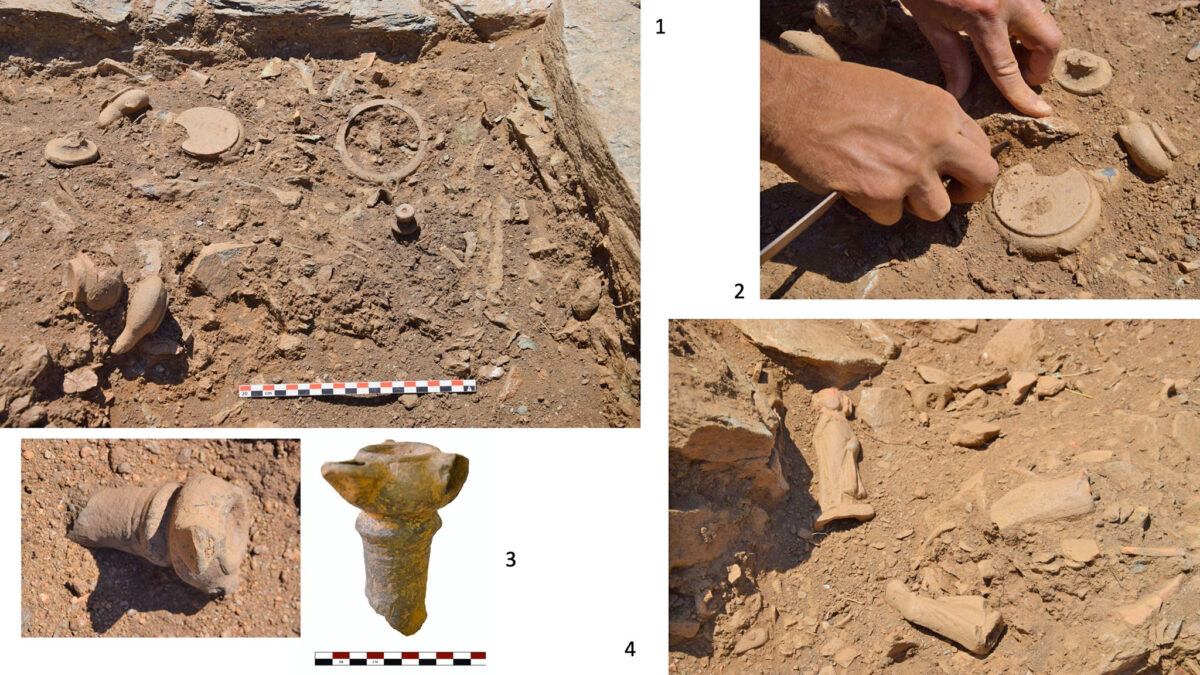 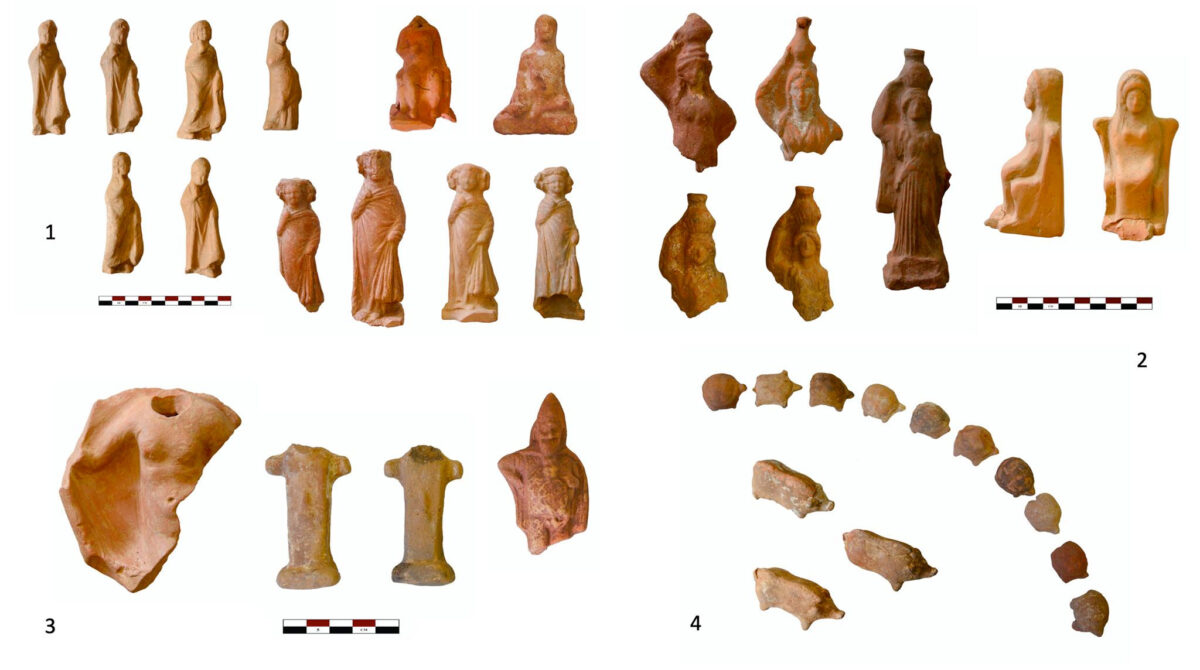 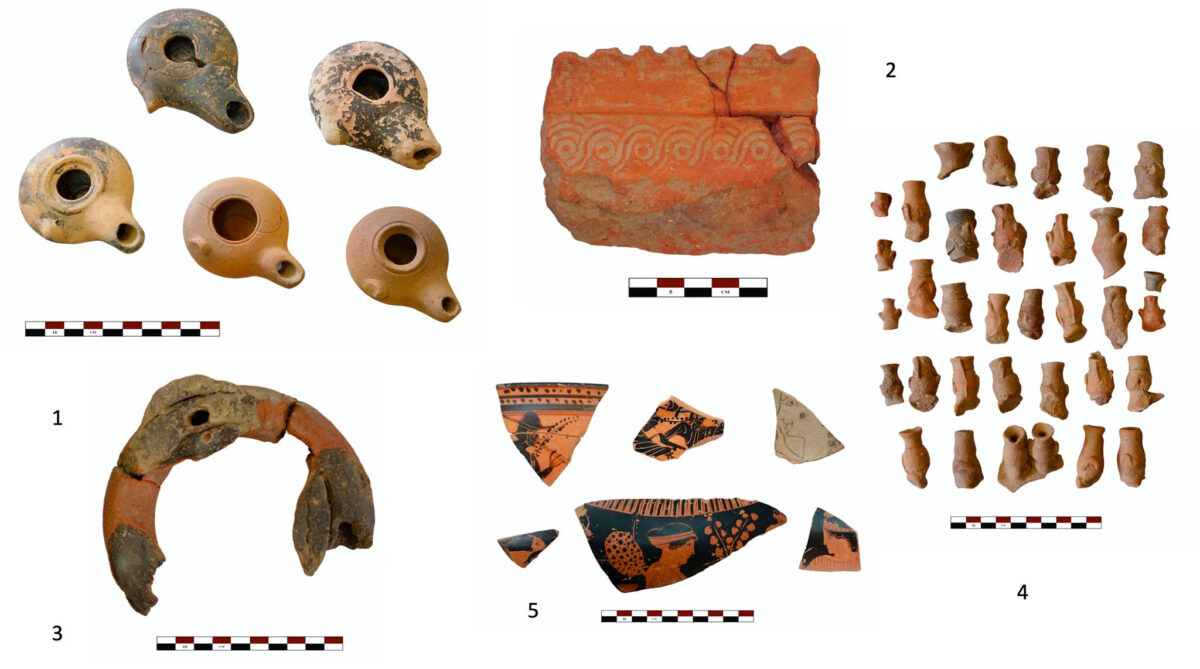 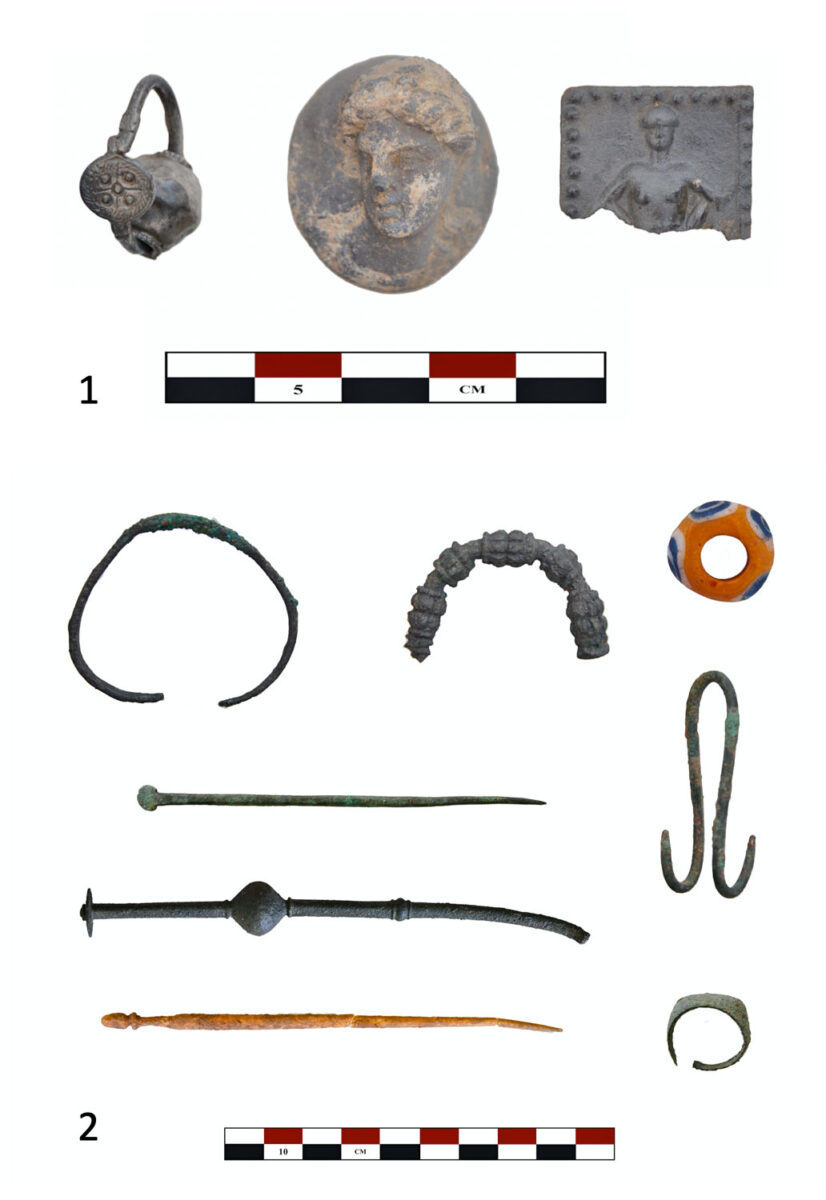 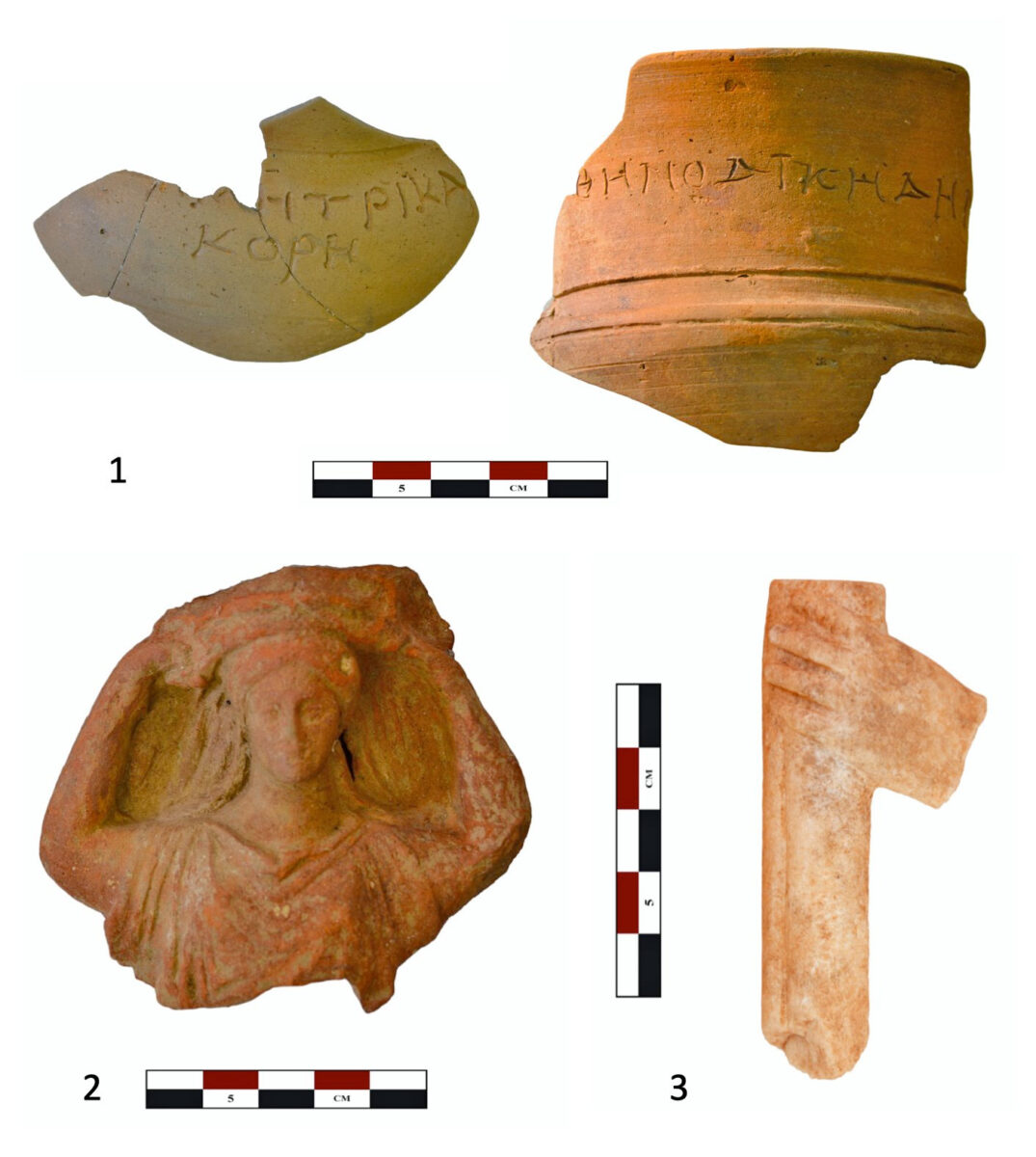 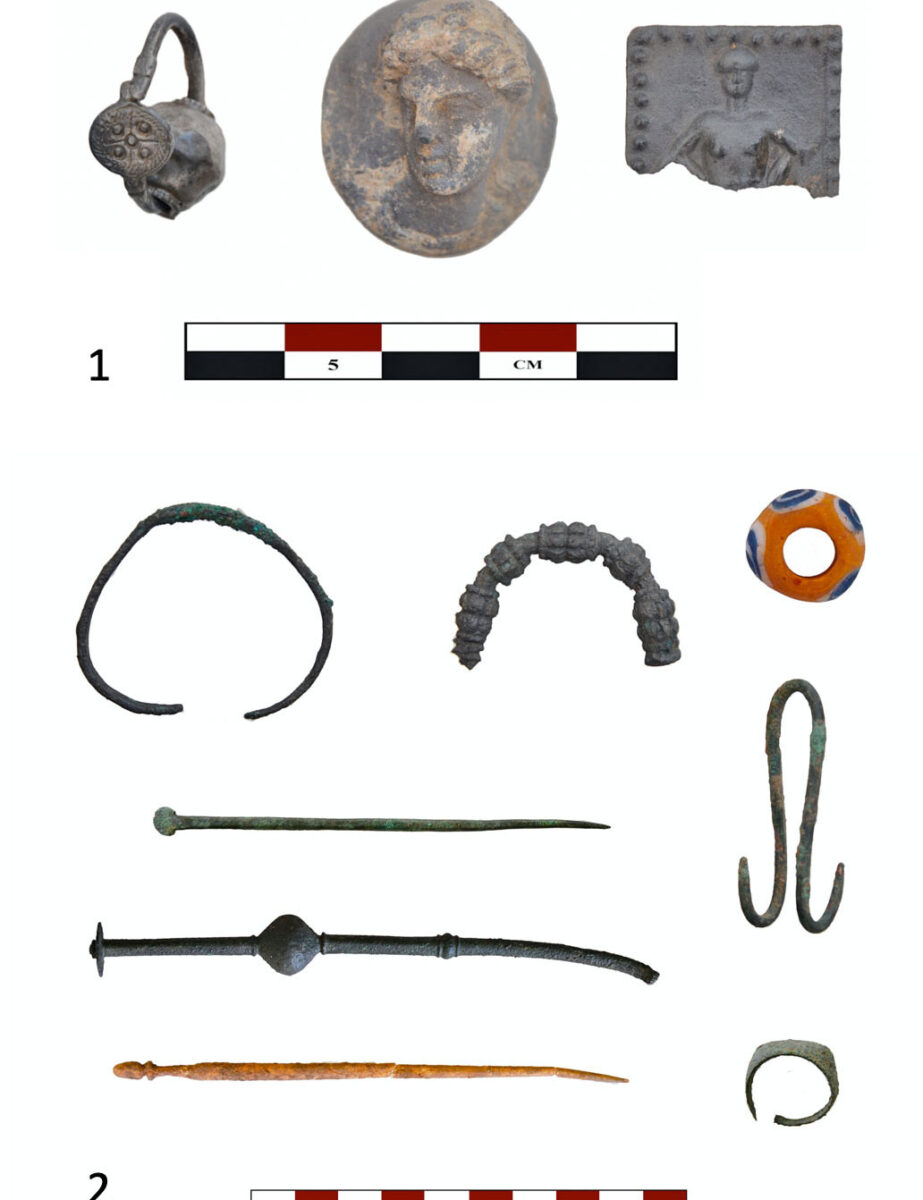 The collaborative excavation at Vryokastro, Kythnos, led to significant results this summer (excavations having begun by the university in 2002). It was conducted by the Archaeology Faculty of the Department of History, Archaeology and Social Anthropology of the University of Thessaly and the Cyclades Antiquities Ephorate of the Ministry of Culture and Sports. The first season of the new five-year excavation programme (2021-25) lasted six weeks (June 2-August 7). The site has been identified as the ancient city of Kythnos, first inhabited during the Early Cycladic period (3rd millennium) and then again continuously from the 12th century BC to the 7th c. AD (fig. 1). This year’s work focused on the excavation of buildings on the acropolis of the ancient city. Extensive clearing of vegetation and removal of scattered stones preceded it, allowing numerous architectural remains to be identified.

Both the nature of the remains and the sparce finds allow us to speculate that the southern part of the acropolis was intended for housing perhaps of a military nature. Two building complexes were partially excavated (Buildings 1 and 2) (fig. 2) which seem to have been constructed in the Early Archaic years and remained in use until at least the Hellenistic period. Here it would be possible to search for the headquarters of the Macedonian guard established on Kythnos in 201 BC by Philip V.

Τhe North part of the plateau on the other hand is occupied by a sanctuary which since the period of surface survey in the 1990s had been identified as Demeter’s (fig. 3-4), based on the nature of the surface finds.

This year, four buildings were discovered in the sanctuary (no. 3-6) and a retaining wall to the East that connects Buildings 3 and 4. Building 3, which is 21 meters long and 8.50 meters wide, with trapezoidal masonry and a monumental entrance in the middle of the elongated North wall, dates to the Classical period.

The inside of Building 3 has not yet been fully explored, and therefore neither its interior layout nor its use is yet known. It is noteworthy, however, that most of the votive offerings of the sanctuary come from the backfilling of the abandoned building (fig. 5, above).

In the Northeast, Building 4 was excavated. It is made up of two chambers, measures 7.50 × 5.70 m and has been undoubtedly identified as a temple, also from Classical times (fig. 3-4). In the West chamber, to the right of the double door’s monolithic threshold, three ritual cases were found, made of upright stone slabs placed partly in a layer of ash containing many burnt animal bones.

Found in the back (East) chamber (“the inner sanctum”), were also many small animal bones, mainly piglet jaw bones, the long neck/stem either from a censer, or from a multi-stemmed ritual utensil (fig. 5, below), as well as a flat dish (cooking utensil). Many intact or almost intact votive offerings come from the backfills of the floors of both chambers.

Between these two buildings, probably built during the late Hellenistic or Roman times,are the two almost square Buildings 5 and 6 with entrances facing one another (see fig. 3-4). West Building 6 (measuring 4.85×4.25m) has at least three tiered levels on its inside possibly for purposes of worship (some clues have led to the assumption that Building 3 was no longer in use).

Lastly, between the main temple (no. 4) and Buildings 5 and 3, a terrace is formed with an entrance from the East, which at some point during the long course of the sanctuary’s use (7th century BC to 3rd-4th c. AD) marked the boundaries of an extensive depositor containing innumerable votive offerings (fig. 6: 4).

The exact use and dating of all the unearthed structures will be determined when the study of the finds and excavation data is completed. In general, research of the buildings’ interior led to the finding of numerous votive offerings. The main volume of the latter, however, comes from the elongated Building 3 and from the depositor (fig. 6:4, fig. 7-9).

Several vessels of the Roman era, originating from the inside of the temple (Building 4), have been identified as ritualistic since they bear inscriptions engraved prior to their burning and offered by women, confirming that the sanctuary was dedicated to the worship of both Demeter and the Kore (fig. 10: 1).

As expected, many of the votive offerings mentioned above refer directly or indirectly to the worship of the two female deities, as well as various individual finds such as a figurine carrying a ritual chest/kistoforos (fig. 10: 2) and the fragment of a marble hand of a Kore (?) figurine holding a torch (fig. 10: 3).

The new five-year excavation programme in Vryokastro, Kythnos is conducted under the direction of Professor of Classical Archaeology Alexandros Mazarakis Ainian and Head of the Cyclades Antiquities Ephorate Dr. Dimitris Athanasoulis. This year’s work was attended by 34 undergraduate and postgraduate students of archaeology from the University of Thessaly and other Higher Education Institutions, as well as by young archaeologists, architects, conservators and photographers. The research was supported by the University of Thessaly,the Cyclades Antiquities Ephorate, the General Secretariat of the Aegean and Island Policy, the Municipality of Kythnos, and primarily by Thanasis Martinos.

It should be mentioned that in 2021 the “AEGEAS AMKE – Athanasios and Marina Martinou Public Benefit Foundation” purchased large plots of land in Vryokastro from the Greek State, allowing on the one hand the uninterrupted continuation of excavations and on the other hand leading to the creation in 30 years time of an organized archaeological site which will operate side by side with the island’s Archaeological Museum; the latter project is extremely important for the protection and promotion of Kythnos’ cultural heritage and is being implemented by the Cyclades Ephorate of Antiquities with funding from the NSRF / South Aegean Region. The museum will open in 2022, coincidentally 20 years after the beginning of the land and sea excavations by the University of Thessaly and the Ministry of Culture on the site of the island’s ancient city.