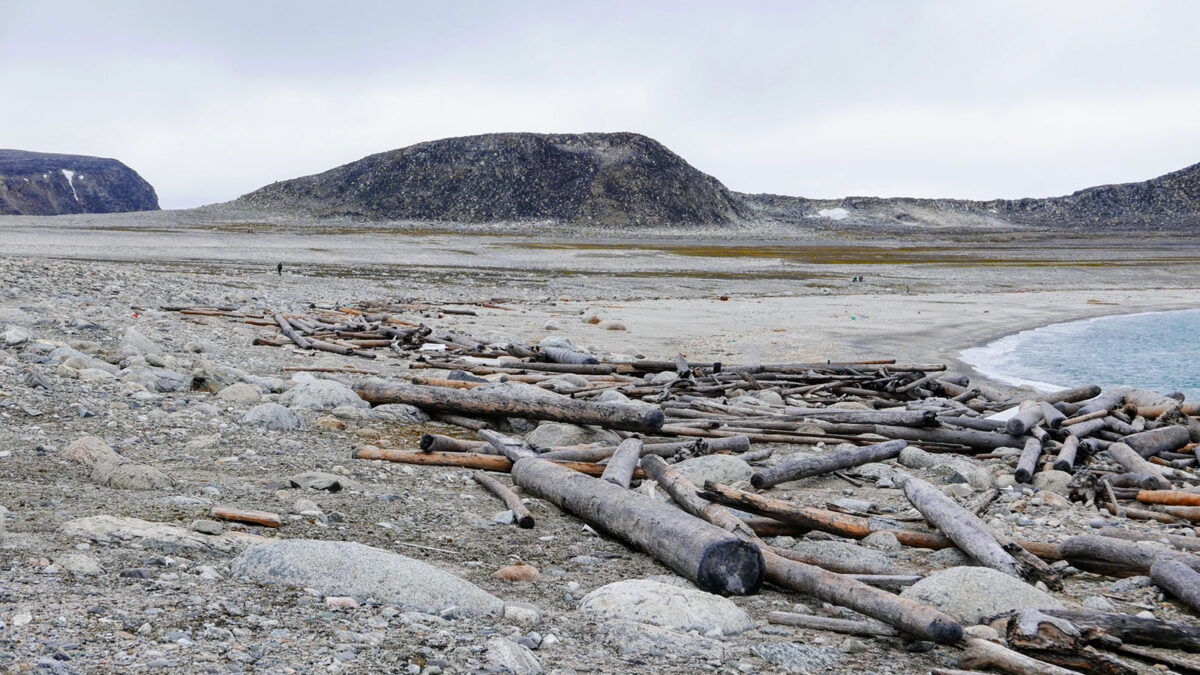 A new study reconstructs the path of frozen trees as they made their way across the Arctic Ocean over 500 years, giving scientists a unique look into changes in sea ice and currents over the last half millennium.

By dating and tracing pieces of driftwood on beaches in Svalbard, Norway’s archipelago in the Arctic Circle, scientists have determined where these fallen trees floated. Retracing the driftwood’s journey let the researchers reconstruct, for the first time, both the level of sea ice over time and the currents that propelled the driftwood-laden ice.

Borne by rivers to the ocean, fallen trees from the north’s expansive boreal forests can be frozen in sea ice and float far, but the new research shows fewer trees are making the long journey as the sea ice that carries them shrinks away.

The new study found a distinct drop in new driftwood arrivals over the last 30 years, reflecting the steep decline in sea ice coverage in a warming Arctic and provides a higher-resolution picture of past Arctic Ocean conditions than other methods allow. The study is published in the Journal of Geophysical Research: Oceans, which publishes research that advances our understanding of the ocean and its processes.

Sea ice is sensitive to climate change and is an important part of Arctic ecosystems, so understanding how ice, ocean temperatures and currents have varied together over time is necessary for predicting coming changes in the Arctic. But doing so can be elusive: Ice melts, after all. The oldest sea ice is only about four years old (and getting younger), so scientists need to turn to other records.

“This is the first time driftwood has been used to look at large-scale changes in Arctic sea ice dynamics and circulation patterns,” said geoscientist Georgia Hole at the University of Oxford, who led the study.

“They’re taking the analysis one step further to connect changes in driftwood to changes in sea ice, and that’s where we want to go. It’s really exciting,” said Hans Linderholm, a paleoclimatologist at the University of Gothenburg in Sweden who was not involved in the research.

The Arctic Ocean collects trees that naturally fall into high-latitude rivers in North America and Eurasia. When it was cold enough, some of the trees were frozen into the sea ice. The ice then floated across the ocean, swept along by ocean currents and winds, until beaching on Svalbard’s shores. There they sat, some for hundreds of years, until researchers like Hole and Linderholm came along.

Researchers have used driftwood for climate-change studies before, but the new study is the first to test how useful Arctic driftwood is for peering into past currents and ice coverage. To check their work, the study directly compared driftwood-inferred sea ice coverage to the observational record of sea ice.

“This is a fantastic resource to say something about ocean currents and sea ice conditions,” said Linderholm. “I think they do have a case for matching [tree] provenance changes to changes in sea ice conditions, which is what we’re looking for: to have sea ice information prior to observations.”

In the summer months of 2016 and 2018, Hole and her collaborators combed several beaches in northern Svalbard for driftwood. Back in the lab, they analyzed the tree rings to determine what kind of tree it was and compared the tree ring patterns of each driftwood slice to a database of measured rings from trees across the boreal forests. Hole could then trace trees to individual countries, watersheds and even rivers and see how driftwood sources varied over time.

Hole paired her driftwood data with early sea ice observations, from 1600 to 1850, thanks to records from Icelandic fishers, seal hunters and passing ships. More recent sea ice data came from airplane and satellite imagery. Finally, she compared driftwood-tracking data with sea ice conditions and currents to see how well they correlated.

Her data revealed a slow and steady northward migration of the lowest-latitude sea ice, reflecting warming, along with swings in driftwood arrivals between North America and Eurasia.

“We also saw an increase in variability in the driftwood record from 1700 to 1850, which we interpret as increased variability in sea ice,” said Hole. Colder conditions tend to have more sea ice, so earlier driftwood reflected a wider range of sources. As the Arctic warmed up and sea ice melted, less driftwood could make the long journey.

The unique method provides nuanced insights that other techniques can’t offer, and this study is just the beginning — until the Arctic loses its sea ice altogether, that is.

“It’s such a fragile system,” Hole said. “If the sea ice does decline as predicted, then this will kind of be a dying field.”