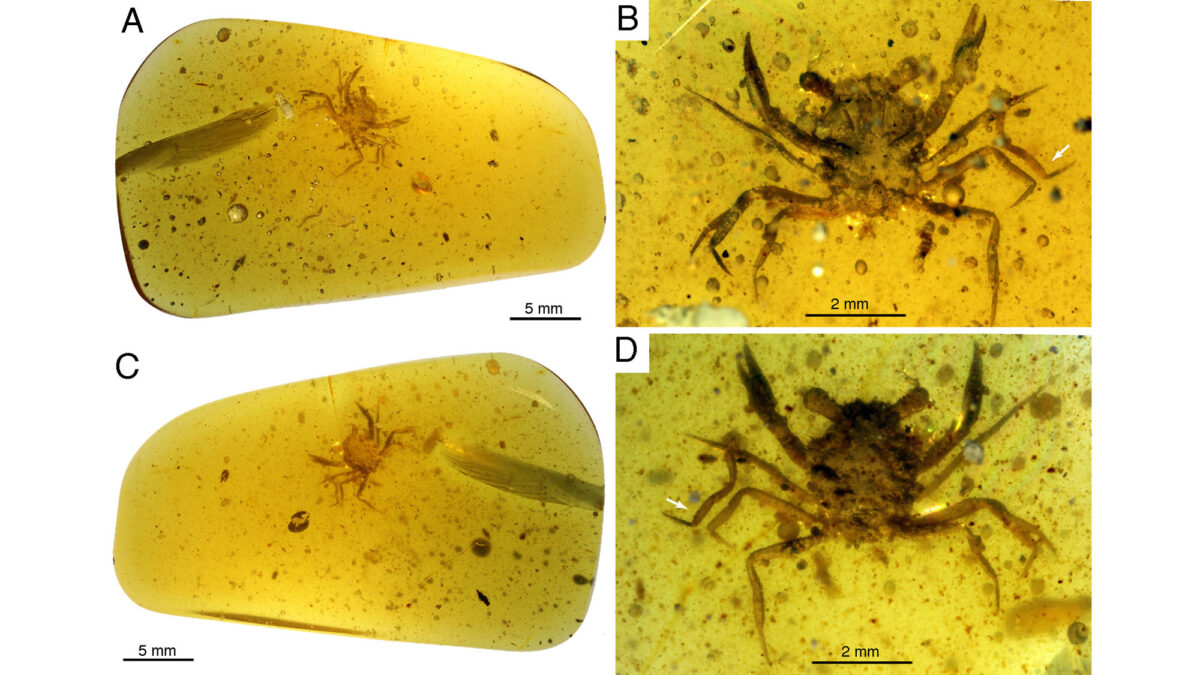 The first fully preserved of its kind

A tiny crab just five millimeters long, trapped in amber about 100 million years ago, was found by scientists. It is the most ancient crab ever found, living in the time of the dinosaurs in a wooded region of Southeast Asia.

Palaeontologists usually find small animals, insects mainly, trapped in amber which comes from the resin of trees. This time however they found a crab.

Researchers from the United States, China, Canada, and other countries, led by Javier Luque of Harvard University’s Department of Organic and Evolutionary Biology, who published the paper in Science Advances journal, described the well-preserved crab as very similar to the ones found today.

“This is the most complete crab fossil ever found. It does not lack a single hair.  Despite it being so small, we managed to see a great many details”, Luque said.

The discovery of the fossil sheds new light on the evolution of crabs and their colonizing the Earth. The first sea crab fossils date back at least 200 million years. Previously scarce and poorly preserved non-marine fossils had led scientists to believe that the first non-marine crabs came ashore 50 to 75 million years ago.

But the new discovery takes evolution much further back in time, at least 100 million years ago. It is estimated that at least 12 different species of crabs evolved independently to live outside their former marine environment, colonizing dry land. Today, crabs are everywhere, from the depths of the oceans and coral reefs to beaches, rivers, caves and even trees. They are one of the few animal species that have managed to conquer the sea, freshwater and dry land. Their gills evolved to include tissues such as the lungs allowing them to breathe both in and out of the water.

The new fossil, named “Cretapsara athanata” and now housed in the Longyin Amber Museum in Yunnan,China, was found in a jungle in northern Myanmar in 2015, but it had only recently been possible for scientists to study it meticulously. Among other things, it was found to have only well-developed gills making it probably a freshwater crab; it might however  have ventured occasionally ashore, where at some point it became trapped in amber.

As Luque said, “Crabs are found all over the world, they are extremely tasty for those who eat them, they are honoured in parades and celebrations; they even have their own constellation. They are generally attractive and some have an extremely strange appearance. Their diversity has sparked the imagination of scientists and the public. Our discovery is indeed a great moment for crabs!”