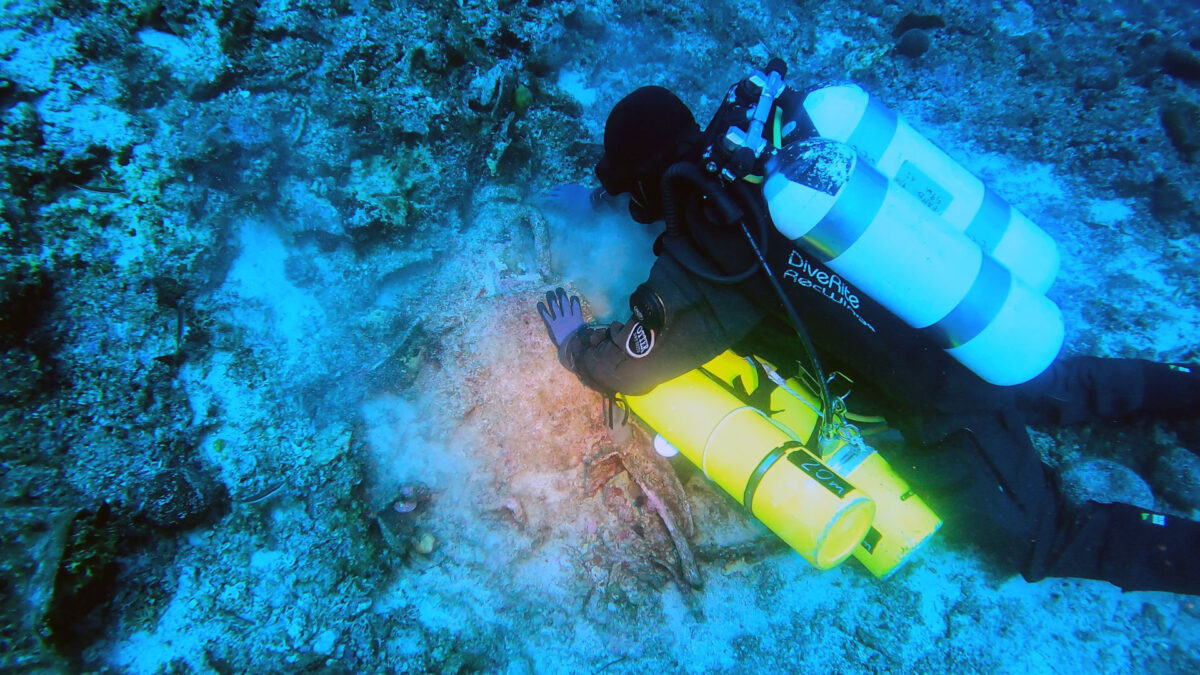 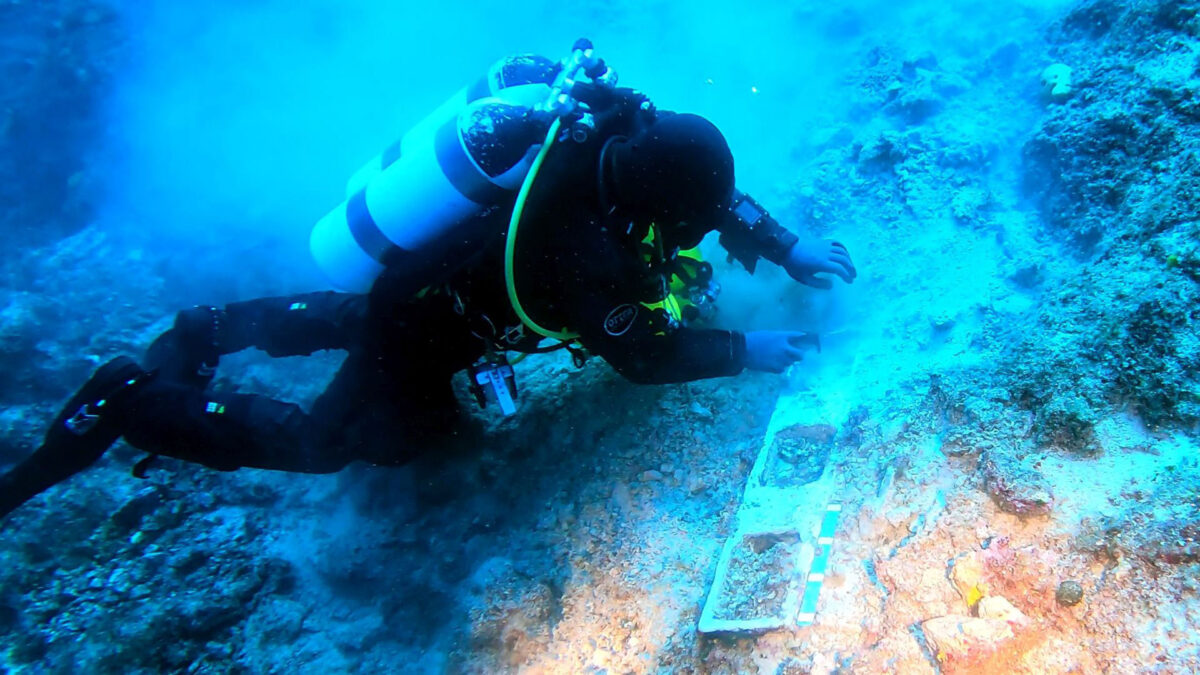 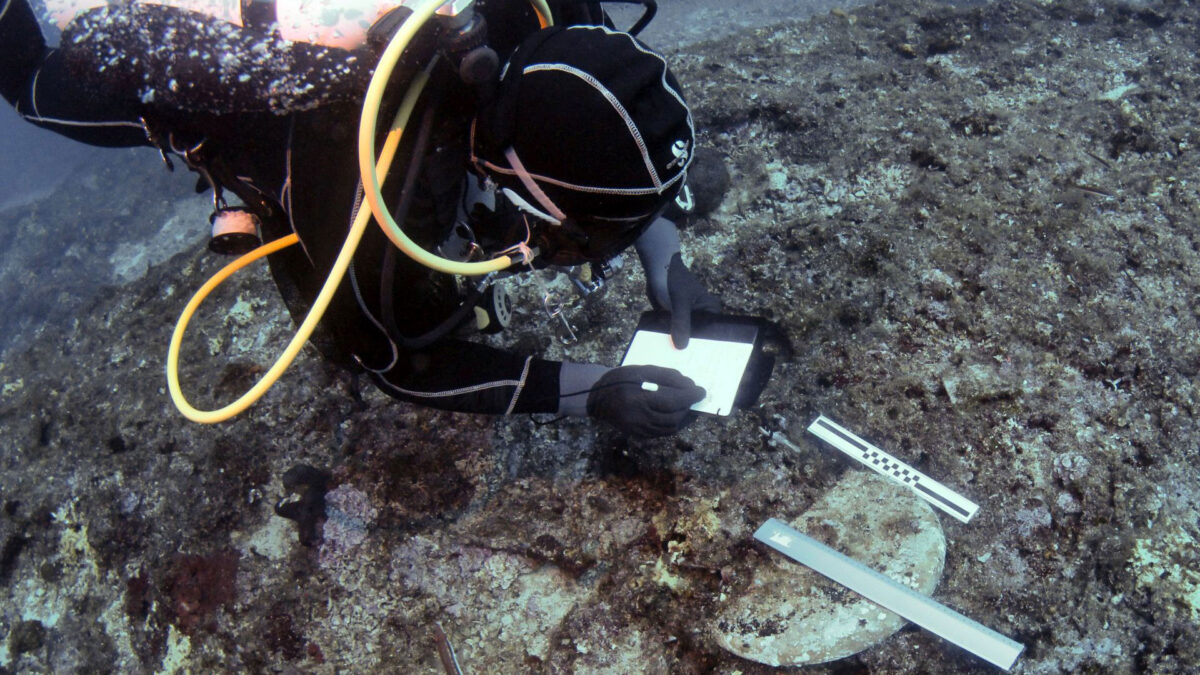 Antikythera shipwreck: the new results of the underwater survey

The Ministry of Culture and Sports announced the completion of the preliminary and exploratory works for the year 2021 on the Shipwreck of Antikythera. The new five-year underwater research programme is being conducted by the Swiss School of Archaeology under Dr. Angeliki G. Simosi, Head of the Euboea Ephorate of Antiquities and Lorenz E. Baumer, Professor of Classical Archaeology at the University of Geneva. Based on the results of this year’s research, a detailed programme will be prepared for the following years (2022-2025), in collaboration with all competent bodies involved. As noted in the announcement, maximum results were achieved in this year’s short expedition despite quite difficult weather conditions.

The first expedition of the second five-year programme took place between October 1-10 and focused on a detailed mapping of the site of the Antikythera wreck and the creation of its complete photogrammetric three-dimensional model in high resolution. On the one hand the mapping allows a much more accurate analysis of the distribution of the findings on the sea floor, fundamental to the accurate representation of the sinking of the ship in the 1st century BC. On the other hand it offers a new cutting-edge tool for an accurate planning of further research.

The successive integration of new and older findings in the model will result in the shipwreck’s complete documentation. It also makes it possible to access the space virtually through the internet. Moreover, this year’s expedition recorded most of the wreck’s surroundings, providing new and important information that will be investigated in future expeditions .

Despite the plethora of findings salvaged from the shipwreck from 1900 to the present, recent research between 2014 and 2019 shows that the scientific community is on the verge of discovering more important archaeological evidence that will help to better understand the site, answering key questions that have remained unanswered for more than 100 years.

The purpose of the investigation is to complete the collection of data necessary to draw conclusions regarding the following : the existence of other remnants of the Antikythera Mechanism at the site of the shipwreck, the ship and its cargo that remain covered as a result of a landslide, the possible connection between wrecks A and B, as well as the number of people aboard ship wreck A. An equally important goal is the discovery and collection of findings which include human skeletal remains, parts of the Antikythera ship and cargo which are exposed and vulnerable to possible human interventions and the adverse effects of the environment.

The most important find is part of a marble statue trapped under a heavy boulder. The initial analysis and documentation of the artefact was carried out by in situ photogrammetry and in due course will be further investigated. During the research, some smaller wooden and bronze structural elements of the ship were retrieved, as well as fragments of ceramics that give valuable information on the cargo’s dating and composition.This and other findings yielded by the future excavation will contribute to a more complete understanding of the valuable cargo on board the ship.

The field teams were coordinated by commodore Alexandros Palatianos and the director of underwater research was Alexandros Sotiriou, a collaborating archaeologist at the University of Geneva, with the participation of members of the Special Diving Team of the Submarine Missions Unit of the Coast Guard, underwater archaeologist Orestis Manousos and Italian researcher Dr. Elisa Costa of Ca ‘Foscari University in Venice.

The research is being conducted by the Swiss School of Archaeology under the supervision of the Ephorate of Underwater Antiquities and with the funding of the Ekaterini Laskaridis Foundation and Swiss Watch Manufacturer Hublot. The Athanasios K. Laskaridis Public Benefit Foundation has provided the Norwegian ship Typhoon, while Cosmote supports the project’s telecommunications.

The project is under the auspices of President of the Hellenic Republic Katerina Sakellaropoulou and actively supported by the Municipality of Kythera and the people of Antikythera.