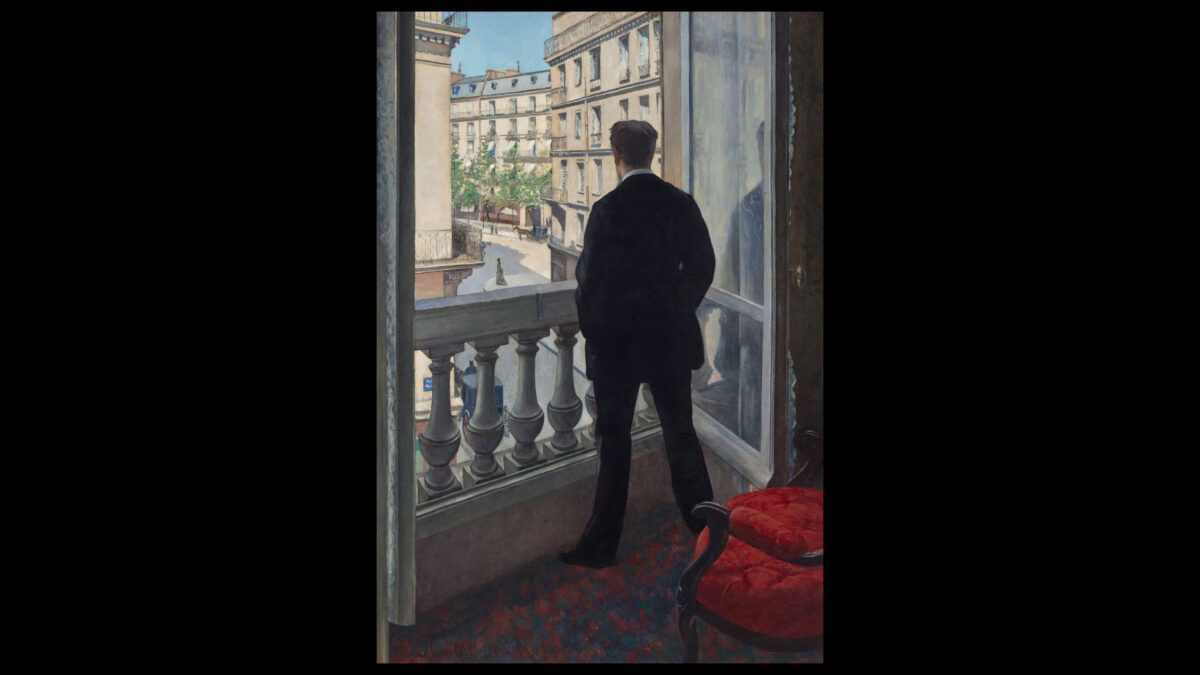 The J. Paul Getty Museum acquired at auction in New York today Young Man at His Window, 1876, regarded as the most important painting by French Impressionist Gustave Caillebotte (French, 1848–1894) in private hands.

The large-scale figure painting, widely considered a masterpiece of modern realism and a key moment in the history of Impressionism, will go on view at the Getty Center Museum in 2022.

“We expect Caillebotte’s Young Man at His Window to become a new standout in our popular Impressionist gallery,” said Timothy Potts, Maria Hummer-Tuttle and Robert Tuttle Director of the J. Paul Getty Museum. “This extraordinary painting exemplifies Caillebotte’s carefully constructed and sharp-edged brand of urban realism—so distinct from the informal landscape aesthetic of artists like Monet and Renoir—and will allow us to present to our public a fuller picture of the art associated with the Impressionist movement.” Young Man at His Window represents a pivotal moment in Caillebotte’s early career. He exhibited it to acclaim at the second Impressionist exhibition in 1876, when he was 27 years old. It was his public debut as a painter, and among his submissions this painting received the most critical acclaim, after his famous The Floor Scrapers (1875; Musée d’Orsay, Paris).

Young Man at His Window is the culminating work in an early trio of domestic interior scenes featuring his immediate family, the other two being Young Man Playing the Piano (1876; Artizon Museum, Tokyo), depicting his brother Martial; and Luncheon (1876; private collection), depicting his brother René, their widowed mother, and a servant. Caillebotte showcased all three as part of his debut at the 1876 Impressionist exhibition, along with Floor Scrapers.

The painting depicts a young man in a dark suit, modeled by the artist’s brother René, standing at a large open window in the Caillebotte family’s well-appointed upper-story apartment in Paris. With his back to the viewer, his feet planted firmly apart and hands in his pockets, he looks out at a sun-drenched street scene tightly framed by tall apartment blocks. A cushiony red satin armchair in the right foreground suggests he has been sitting at this window for some time, and that he has been suddenly roused. His attention seems fixed on a lone woman crossing the street below, who, despite her small scale, is so insistently framed by the painting’s plunging perspective that viewers have been riveted ever since.

“With dramatic lighting, painstaking execution, and a highly original composition that brilliantly conjoins domestic interior and Paris street scene, Young Man at His Window is an acknowledged masterpiece from the most inventive period of Caillebotte’s career,” says Scott Allan, curator of paintings at the Getty Museum. “Caillebotte’s painting represented the most innovative form of modern urban realism in the mid-1870s. Such realism was a key ingredient of the broader “Impressionist” project, particularly among the most ambitious figure painters of the independent exhibition group, and it anticipated by many decades, as scholars have recognized, important developments in photography and cinema. Young Man at His Window remains a bracingly modern work, one whose visual acuity is matched by its psychological tension and ambiguity.”

Fascinating viewers since its debut, the painting has featured prominently in nearly every major Caillebotte retrospective since 1894. It has been extensively discussed and reproduced in scholarly literature.

Aside from being a productive painter, Caillebotte was a dedicated art patron, collector, yachtsman, horticulturalist, and philatelist who established himself as a central protagonist and supporter of the Impressionist movement. In his own art he made important contributions in the genres of portraiture, landscape, and still-life, but he is most recognized for his paintings of modern urban life, which were among the most original and ambitious in the genre and caused a sensation in the Impressionists’ independent group exhibitions.

Caillebotte was born into a wealthy family in Paris in 1848. Although he completed a degree in law in 1868, he never practiced. Following his studies and a brief period of military service during the Franco-Prussian war (1870–71), Caillebotte studied art in the studio of painter Léon Bonnat (1833–1922), and in 1873 he was admitted to the École des Beaux-Arts in Paris.

Despite these conventional academic beginnings, Caillebotte developed his first important professional relationships outside the artistic establishment, becoming close friends with Edgar Degas (1834–1917), Giuseppe de Nittis (1846–1884), Henri Rouart (1833–1912) and other progressive artists. In 1875, his painting The Floor Scrapers was refused by the jury of the Salon. This rejection marked the end of Caillebotte’s bid for a conventional artistic career and prompted his engagement with the Impressionist group, which had extended an invitation to him. The following year, The Floor Scrapers was presented together with Young Man at His Window and six other pictures in the second Impressionist exhibition.

Caillebotte’s debut in 1876, which attracted serious critical attention, marked the beginning of a long collaboration that saw him take part in five of the eight Impressionist exhibitions held between 1874 and 1886, establishing him not only as one of the dominant contributing artists but also as the group’s principal financier, promoter, and organizer. The death of his father in 1874 had left Caillebotte with a significant inheritance, which he invested in the group, acquiring paintings by his fellow artists and assisting some of them financially, notably Claude Monet (1840–1926) and Camille Pissarro (1830–1903). Caillebotte lent works from his increasingly large collection, which comprised pictures by Degas, Monet, Pissarro, and Pierre-Auguste Renoir (1841–1919), to the Impressionist exhibitions, and he also became actively involved in the organization of these shows, personally selecting participants, overseeing the display, and paying for the advertisements. By the end of the 1870s, less than five years after his debut, Caillebotte had become both a central actor and a driving force behind the movement.

The second half of the 1870s was also the most creatively fertile period of Caillebotte’s career as a painter. It was during this period that he completed his most celebrated pictures, including The Pont de l’Europe (1876; Musée du Petit Palais, Geneva), Paris Street; Rainy Day (1877; Art Institute of Chicago), and Young Man at His Window (1876). In close dialogue with Degas particularly, Caillebotte created both indoor and outdoor scenes of urban life that constituted a major contribution to the modern realist movement in France and continue to compel viewers’ attention through their daring perspectives, exacting detail, and vibrant lighting.

This is the first work by Caillebotte to enter the Getty’s collection, where it will become a centerpiece of the Impressionist paintings gallery and a major attraction for Getty Center visitors.