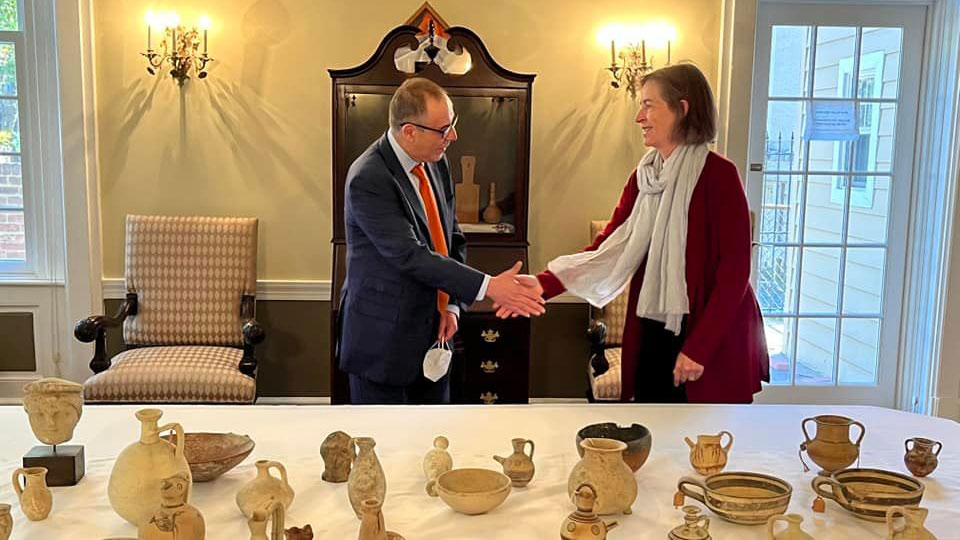 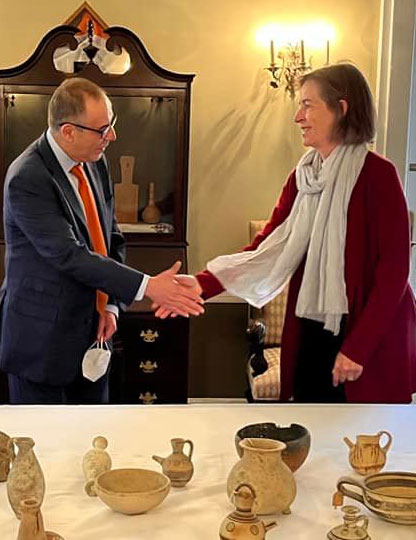 by Archaeology Newsroom
The Department of Antiquities of the Ministry of Transport, Communications and Works, announces that on the 11th November 2021, 38 antiquities belonging to various prehistoric and historic periods, were handed over to the Embassy of the Republic of Cyprus in Washington, USA, by Mrs. Katherine Grayson Wilkins. Mrs Wilkins voluntarily offered to return the antiquities to Cyprus. Ambassador Marios Lysiotis warmly thanked Mrs Grayson Wilkins for kindly delivering the antiquities, which had been in the possession of her late husband Fraser Bryan Wilkins (President of the Board of Trustees of the Cyprus American Archaeological Research Institute-CAARI from 2015 to 2021) and previously were in the collection of his father, the late Fraser Wilkins (the first ambassador of the USA to the Republic of Cyprus, 1960−1964).
The Department of Antiquities wishes to express its warmest appreciation to Mrs Grayson Wilkins for making the commendable decision to hand over the antiquities, as well as for her excellent collaboration over the past months. Special thanks are also expressed to the Cyprus American Archaeological Research Institute-CAARI and especially its Director, Dr. Lindy Crewe for her vital role in the handing over of the objects and for her ongoing assistance on many levels. The Embassy of the Republic of Cyprus, through its Ambassador Marios Lysiotis has provided excellent assistance on the matter and his contribution has been, and continues to be, essential.
The Department of Antiquities, as the competent authority of the Republic of Cyprus for the protection, preservation and management of cultural heritage on Cyprus, including the repatriation of cultural objects, continues its efforts on these issues, at many levels. The repatriation of antiquities and the prevention and combatting of looting and illicit trafficking of cultural goods is extremely high on the Department’s priorities. Within this framework, collaboration and coordination with other authorities, the National Committee for the Prevention of Looting and Illicit Trafficking of Cultural Heritage, as well as with the wider public, are considered to be of vital importance.